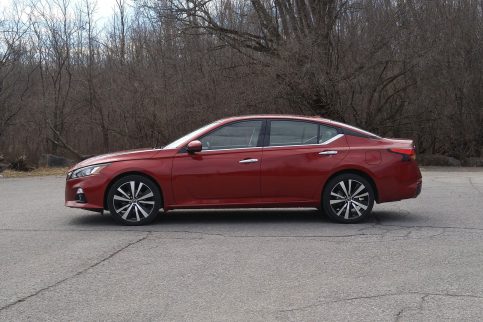 As the market for sedans continues to shrink, car makers are reaching for anything to make their cars stand out from the crowd. For Nissan and its mid-size Altima, that trick is making it the only car in its class with standard all-wheel drive.

Despite existing since the 1990s, the Altima is less of a household name than the Honda Accord or Toyota Camry, both of which were redesigned in 2018. Nissan’s 2019 Altima update is visually less dramatic, but standard all-wheel traction offers a nod to the compact and mid-size crossovers competing with family sedans like this one.

All Altima trims use the same 2.5L four-cylinder engine. Despite rather ordinary power output on paper, it gets the car up to speed quietly and smoothly.

Meanwhile, the continuously variable automatic transmission (CVT) keeps engine revs and noise low in normal acceleration. In quicker acceleration or passing maneuvers, it mimics a transmission with fixed gear ratios to avoid the droning engine sound characteristic of older CVTs. Stick to the speed limit in highway driving and the engine turns at less than 2,000 rpm.

If you’re looking for a sporty drive, the Altima is not the car for you. This is a pretty laid-back vehicle that Nissan has clearly designed to appeal to A-to-B drivers, not enthusiasts.

My test car proved thrifty on gas, averaging 7.3 L/100 km in nearly 600 km of secondary highway driving. That’s a good real-world result compared to Nissan’s estimates of 9.3/6.7 L/100 (city/highway). Our experience suggests the Altima’s AWD system takes a toll — albeit a small one — on its fuel economy. Last year, we saw similar fuel consumption in a front-wheel drive Nissan Maxima, whose powerful V6 engine is rated at 11.6/7.9 L/100 km.

But if the Altima uses a little more gas because of its standard AWD, I suspect you’ll forget about that the first time you drive it in slippery winter conditions.

In Canada, the Altima is not available with a high-performance engine, but in the U.S. Nissan offers a turbocharged motor that makes 236 hp and 267 lb-ft. American Altima buyers also get a front-wheel drive option.

The purpose of a family sedan is right in the name: to provide comfortable transportation for a family. There’s not a lot to say here other than that the Nissan Altima has a spacious interior that will easily seat four adults with good head- and legroom. Among the Altima’s best features are its so-called zero-gravity front seats that are soft, supportive and comfortable for long drives.

Nissan includes its Pro Pilot Assist suite of advanced safety features starting with the mid-range Altima SV. It includes emergency braking with pedestrian detection, lane-departure warning and intervention, rear automatic braking, and blind-spot warning with rear cross-traffic alert. The Altima is not notable for including those items, but it does stand out for the button on the steering wheel that turns the whole package on and off with one push. That’s a nice thing if you find safety-system warnings more of a distraction than anything else.

Platinum trim adds a 360-degree exterior camera system that shows a view all around the car when the transmission is in reverse, or when you press the “camera” button on the dash. My only complaint is the image resolution straight out of a 20-year-old point-and-shoot digital camera.

The Altima’s infotainment system looks a lot better, and it’s easy to figure out. That camera button I mentioned above is found next to others that take you directly to stereo controls and the navigation system. There are even skip forward/back buttons for the sound system, and I really appreciated the easy-to-access day/night mode control for the display.

A sub-$35,000 price is attractive for a top-end family sedan. It’s bracketed by the Honda Accord Touring ($36,190) and Kia Optima EX Tech ($33,345), cars with similar performance but without AWD. However, both of those models come with ventilated front seats, conspicuous by their absence in the Altima.

I’m hesitant to call the Nissan Altima’s standard AWD a gimmick, but in a way, it is. The company hopes to reel in sedan buyers charmed either by one of the vast number of crossovers in the marketplace, or by direct competitors like the Toyota Camry and Honda Accord.

But to focus on the Nissan Altima’s four-wheel traction is to miss the point that this is simply a well-designed sedan. It’s roomy, comfortable and efficient, which makes AWD the icing on an already-tasty cake.