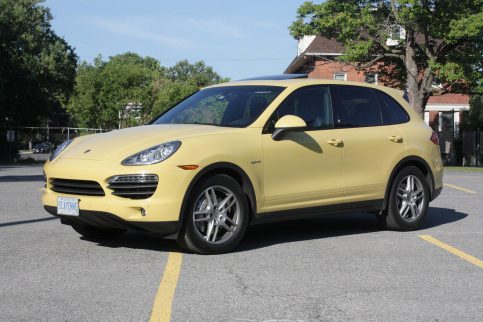 Diesel engines enjoyed a surge in popularity in North America about 20 years ago thanks to technology that made them quieter, cleaner and more powerful. Then came the 2015 Volkswagen emissions cheating scandal. The German automaker tarnished the diesel engine’s reputation by programming their engines to run clean only when connected to emissions-testing gear.

Since then, only a handful of automakers still offer diesel engine options. If you’re among the minority of drivers on this continent who like the torque and fuel economy diesels are known for, the used-vehicle market offers the most variety.

We realize that much of what you’re about to read may scare you away from a diesel-powered SUV. However, like any reliability issue, many of these problems are closely linked to how the vehicle is used and maintained.

Before we get into the individual vehicles, here are the basics on two of the emissions-control technologies common to most modern diesel engines.

The majority of modern diesels have a filter built into the exhaust to eliminate the sooty black smoke that characterized older diesel engines. These filters are designed to be self-cleaning. However, in cars used mostly for short drives, the engine may rarely go into its automatic filter-cleaning mode. If that happens, the filter can become clogged and damaged, causing performance problems and warning lights.

Most examples of the new generation of clean-running diesels also use diesel exhaust fluid (DEF). It’s injected into the exhaust system to help eliminate harmful pollutants called nitrogen oxides. Diesels that use this fluid have a reservoir that must be refilled periodically. If it runs dry, the car will not start until you refill it with DEF.

These three Volkswagen Group models shared a diesel V6 implicated in the 2015 emissions scandal. VW stopped selling diesels in North America after that, so the used market is now the only place you’ll find this 3.0L engine with its 240 hp and 406 lb-ft of torque.

Here’s a discussion about a rattling sound that could be linked to the TDI engine’s chain-driven valve train.

Some V6 TDI drivers report oil consumption. There seems to be little agreement on whether this is normal for the engine.

This recent buyer of an emissions-fixed Audi Q7 TDI wants to know if a shudder or rumble sensation is normal when the engine is idling. This is not a widespread complaint as far as we can tell, but watch for it during your test drive just in case.

The 3.0L TDI engine uses a high-pressure fuel pump that is prone to failure in higher-kilometre vehicles. When it fails, it often causes the engine to stall and sends metal particles into the fuel system. The fix is to replace the entire fuel-delivery system, which reportedly adds up to more than $10,000 in parts and labour costs. According to this 2017 news article (about a similar problem with four-cylinder TDI engines), Volkswagen has covered the costs of some fuel-system repairs.

In the aftermath of the diesel scandal, VW offered to repair the affected engines and extend the emissions-control system warranty. It’s not clear whether this coverage is transferable to subsequent owners.

Jeep began offering the Grand Cherokee with a 3.0L V6 called EcoDiesel in 2014, after the Chrysler brand became part of the Fiat Chrysler Automobiles (FCA) alliance. The Fiat-made engine makes 240 hp and 420 lb-ft of torque and is by far the most efficient Grand Cherokee engine.

In 2017, this engine made headlines after the U.S. Environmental Protection Agency (EPA) accused FCA of an emissions cheat similar to Volkswagen’s. FCA updated the Grand Cherokee’s engine-control software to clean up the engine’s emissions, but many owners say their vehicles don’t run the same after the fix.

Here’s a discussion about faults with the Jeep’s diesel exhaust fluid system.

Some diesel Grand Cherokee owners complain of overheating and that the truck’s engine-oil cooler is inadequate.

Among Jeep Grand Cherokee diesel owners’ less-serious complaints are interior rattles, which could be linked to the diesel’s rougher operation compared with gas engines.

Land Rover began offering a six-cylinder turbodiesel engine for the Range Rover and Range Rover Sport in 2016 and the Discovery in 2017. It makes 254 hp and 440 lb-ft of torque and comes with an eight-speed transmission and the brand’s capable 4WD system.

One common issue reported by diesel Land Rover owners is a service-interval indicator that lights up much sooner than expected. In some cases, the dealer service department recommended ignoring the warning. However, that might be ill-advised: apparently, the emissions-control system can dilute the engine oil with diesel fuel, necessitating more frequent oil changes than Land Rover recommends.

Some diesel Land Rover owners describe significant turbo lag, a normal characteristic of the engine that can get annoying.

Other owner complaints include a smaller fuel tank than gas-powered models and a fuel gauge that underestimates how much diesel is left in the tank.

If you like to do your own maintenance, here’s a video describing the engine-oil change process.

Here’s a discussion about the pros and cons of the Land Rover diesel versus its gasoline engine offerings.

Mercedes-Benz‘s mid- and full-size SUVs got the company’s clean-running 3.0L Bluetec V6 in 2009. For that first year, vehicles using it were named with a 320 suffix, which changed to 350 in 2010. Mercedes renamed the mid-size ML-Class as the GLE-Class in 2016. The larger seven-seat GL-Class became the GLS in 2017.

This article details a litany of common issues with the Bluetec diesel V6, most of which have to do with engine-oil quality and oil-change intervals. Highlights from this long read include oil dilution — an issue Mercedes addressed in 2013 by increasing the engine’s oil capacity — and diesel exhaust fluid that can freeze in cold winter weather.

Using diesel fuel contaminated with water or accidentally filling the tank with gasoline can cause fuel-system issues similar to the Volkswagen problem we discussed earlier. As in those vehicles, the fix is to replace all kinds of fuel system components.

According to this, refilling the Bluetec’s exhaust fluid can be expensive.

There are horror stories on the web of Bluetec engines developing oil sludge and seizing up due to a lack of lubrication despite claims of regular dealer servicing. Read about seized engines here and here.

Here’s another story about oil sludge.

This diesel X5 owner likes everything about their car except for all of the diesel emissions system problems.

Here’s one X5 diesel driver’s saga about diagnosing a rough idle that they eventually traced to a faulty fuel injector.

Introduced in 2017, Jaguar’s mid-size F-Pace is one of the newest additions to the upscale SUV marketplace. The F-Pace is the only vehicle here whose diesel is a four-cylinder, which puts it at a power disadvantage with just 180 hp and 318 lb-ft of torque.

Like most modern diesel cars, the F-Pace uses diesel exhaust fluid (DEF) to clean up the car’s emissions. If the DEF tank runs dry, the car will not start. This F-Pace owner ran into an issue where the fluid-level sensor was stuck at empty even though the tank still had fluid in it.

Here’s another discussion about DEF-related faults in the F-Pace.

The F-Pace also has an exhaust soot filter designed to be self-cleaning. However, it can become clogged, putting the car into “limp-home” mode, as was the case for this driver.

Diesel fuel-pump nozzles and tank-fill openings are smaller than gas pumps to help prevent filling the car with the wrong fuel. Here’s a discussion about owner experiences with diesel pumps that are too large and don’t fit in the car’s filler neck.