Car Reviews and Tips » Acura NSX on the Track 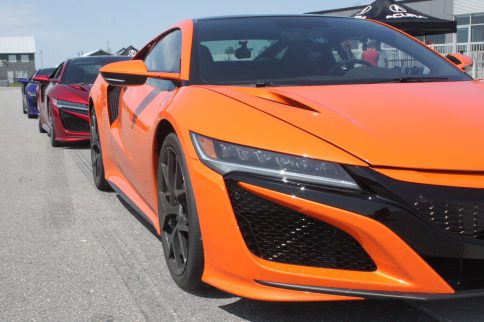 The Acura NSX looks good anywhere, but there’s nowhere it will perform better than on a racetrack. So when Acura invited me to Canadian Tire Motorsports Park (CTMP) for some track time in their NSX supercar, I jumped at the chance.

Acura is best-known for its sedans and SUVs, so the NSX is a dramatic departure for the Japanese company. This version of the NSX has been around since 2017, but Acura built a first-generation model from 1990 until the mid-2000s.

NSX is a hybrid

It may not look like one, but the new NSX is a hybrid. While a conventional hybrid uses electricity to save fuel, the NSX’s battery and three electric motors make the car faster and help it handle better. The main motor is in the back with the turbocharged V6 and nine-speed transmission. The other two are at the front, located at each wheel. The car’s computer system directs more power to the outside front wheel in a corner, which makes it easier to power through a racetrack’s turns.

Acura says the NSX’s gas engine and three electric motors generate a total of 573 hp. That puts the car in the same league as the Aston Martin DB11, Lamborghini Huracan, and McLaren 570. However, at $193,000, the NSX is less expensive than those cars and most of its other direct competitors.

I haven’t driven any of those exotic cars, so I can’t make a direct comparison. Even without a baseline by which to gauge its performance, the Acura NSX is scary fast. It rocketed down the straightaway at CTMP’s small driver-development track, gaining speed in a way that seemed to defy physics. Electric motors make a lot of torque, so they do a lot of the work at lower speeds (which, in this case, means under 100 km/h) while the gas engine makes most of its thrust at higher speeds.

Flat-out acceleration produces a lot of enticing engine sounds, but what you hear in the cabin is actually piped in from the engine’s air intake. Outside the car, the exhaust is surprisingly quiet. There’s even a quiet drive mode that will allow the car to move on electricity alone at low speeds, so you don’t annoy your neighbours.

Accelerating through a corner

If you’ve had any professional performance-driving instruction, you may know that many cars have a hard time accelerating through a corner. That’s less of a worry in the NSX because of how it over-drives the outside front wheel in a turn. That helps eliminate understeer, a car’s tendency to keep going straight when the driver turns the steering wheel at racetrack speeds.

The Acura NSX has huge brakes that fill out its 19-inch front and 20-inch rear wheels. They look impressive, but that’s not the point: They’re designed to stop the NSX as effectively as it accelerates. That’s a good thing, because the compact driver-development track requires frequent aggressive braking. Every time I applied heavy pressure to the brake pedal, I could literally feel my internal organs shift. It’s a creepy sensation, but when you’re moving this quickly, that kind of braking makes you feel safer.

Acura offers a carbon ceramic brake option on the NSX, a design derived from race cars. They stand up better to the heat that hard braking generates, so their $13,000 price is a good investment if you plan to drive your NSX on the track.

For all that the NSX is capable of extreme performance, it’s surprisingly easy to drive in any situation. The two-seat cabin is small, but the seats are supportive and comfortable enough to sit in every day, if your commuting budget can support it. There’s a small trunk that will hold a few grocery bags or an overnight duffel. And Acura estimates the NSX’s fuel consumption at 11.1/10.8 L/100 km (city/highway), impressive figures for a car than can accelerate from 0 to 100 km/h in about three seconds. So you can take it to work Monday through Friday and then hit the racetrack on the weekend.

The Acura NSX may not boast the same level of prestige as an Italian exotic, but it’s an extremely impressive machine. If you’re in the market for a high-tech supercar and can afford the $200,000 price tag, the NSX should be on your short list.