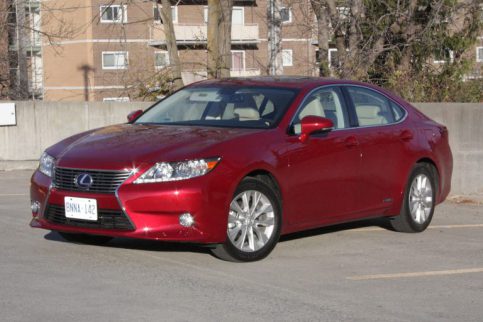 At one time, a comfortable sedan was the most common form of luxury vehicle. Industry trends may continue to shift toward crossovers and SUVs, but several car manufacturers still make those more traditional upscale mid-size sedans.

Earlier this year, we showed you what to watch for when shopping for a used German sedan. This time, we’re looking at Japanese and Korean models from brands like Acura, Lexus, Hyundai, Genesis and Infiniti.

Germany’s auto industry has more experience building upscale cars, but Asian brands — especially those from Japan — have mastered reliability in this category. Still, as with any vehicle, there are things you should know before bringing home a Japanese or Korean luxury car.

Hyundai introduced the second-generation Genesis sedan in 2015 and renamed it Genesis G80 in 2017 when the company turned Genesis into a separate luxury brand. Engine choices are a 311-hp V6 and a 420-hp V8. All-wheel drive and an eight-speed automatic transmission were standard.

The Genesis’s Luxury trim came standard with a sunroof, which is a major source of owner complaints. Most common among them are rattling noises and air leaks when the roof is closed. The doors also squeak and rattle.

Another on-the-road test should be to listen for banging or knocking sounds from the suspension or vibrations from the wheels. Owners have complained of both, especially in 2015 models.

It might be worth trying to schedule a test drive in the evening to test the headlights. The automatic on/off and high beam functions don’t always work reliably. A few owners also reported headlight bulbs that burned out prematurely.

There are a few transmission complaints, but no single issue appears to be widespread. The eight-speed used in the Genesis sedan/G80 should shift smoothly between its ratios. Watch out for harsh shifts or delayed engagement when shifting into drive or reverse. Also ask the seller if they have maintenance records to show the transmission was serviced according to Hyundai’s recommendations.

The Infiniti Q70 is another car whose name changed in the mid-2010s, having started out as the M37. Infiniti offered some variety under this car’s hood: a V6 makes 330 hp, and a hybrid V6 offers 302 hp and better fuel efficiency. There was also a V8 with 420 hp. All engines came with a seven-speed automatic transmission, and all-wheel drive was an option. The Q70 stands out for a long-wheelbase model with more rear-seat legroom.

There are a handful of complaints related to the timing chain that drives the valve system in the V8 engine. At least one owner who had to have one replaced admitted they had waited too long to change the engine oil, and poor lubrication is a known cause of prematurely worn timing chains. However, Infiniti did conduct a service campaign to replace timing chain components in M56 models from 2011 through 2013. The apparent cause for the failed parts was insufficient lubrication. If you’re looking a V8 model, have a mechanic inspect the valve timing system even if the car is newer than 2013.

Another thing to watch for is clumsy transmission performance. If the car hesitates before downshifting for acceleration or shifts harshly under any circumstance, updated control software could be the fix.

Infiniti has not sold a huge number of these cars, so reliability information can be hard to come by. Beyond the issues discussed above, shop for a car that comes with proof of good maintenance and gets a passing grade from a trusted mechanic.

Here’s yet another mid-size car that got a name change at its most recent redesign. The TLX introduced a four-cylinder engine to Acura’s mid-size sedan, and could be optioned to a V6 carried over from the TL. That V6 made 280 or 305 hp depending on trim, and came with a six-speed automatic transmission and either front- or all-wheel drive.

The TLX’s four-cylinder makes 206 hp and its version of Acura’s V6 is good for 290 hp. The lesser motor comes with an eight-speed dual-clutch transmission, while the V6 gets a nine-speed automatic.

Our experience with a TLX four-cylinder model revealed its eight-speed transmission is prone to clunky shifting in the lower gears when the car is cold. Models with the nine-speed generated widespread complaints about poor shifting when the TLX was a new model. Acura addressed some of these problems with software updates and, in other cases, replaced the transmission outright.

Along with monitoring the transmission’s performance, watch for vibrations when driving at highway speed. Some owners say Acura replaced TLX drive axles and drive shafts to fix this problem.

The older TL used a five-speed automatic transmission that Acura upgraded to a six-speed in 2012. The five-speed deserves more scrutiny, as it’s a newer version of a gearbox that was known for reliability issues. During your test drive, watch for rough shifting and ask the seller for proof of regular maintenance.

Common to five- and six-speed TL models is a known vibration issue with the torque converter, which transfers power from engine to transmission. Acura replaced many TL torque converters under warranty. Before buying, ask about the history of the car you’re looking at. If the torque converter has been changed, that’s good news. If not, listen and feel for vibrations while driving, and consider having the car looked over by a trusted mechanic.

The popular Lexus ES entered a new generation in 2013, once again based on a platform shared with the Toyota Camry. Despite those modest roots, the ES is one of the smoothest, quietest sedans you’ll find. The ES 350 uses a 268-hp V6 that offers strong performance. New in 2013 was a hybrid variant called ES 300h, in which a four-cylinder worked with an electric motor for thrifty fuel consumption.

The ES boasts a very good reliability record, so you have to look pretty hard to find common flaws. Those tend to involve the car’s electrical accessories and electronic components.

Test all the power windows and door locks for smooth operation with no strange noises. Trying rolling all four windows up and down at the same time. If any of them move significantly more slowly than the others, the window mechanism may simply need to be lubricated.

Other worthwhile checks include the automatic climate control system, infotainment settings and navigation, if it’s included in the car you’re driving. Some owners say their cars’ climate control settings change unexpectedly or the system just won’t do what it’s told.

The in-dash navigation system is the source of gripes about faulty directions, and the Bluetooth system may refuse to recognize a telephone or music streaming device.