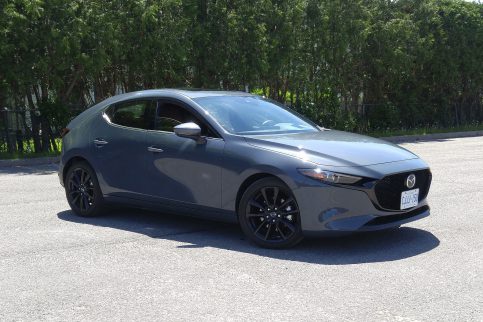 The Mazda3 is widely considered the driver’s choice among economy cars. Mazda has built this compact’s reputation around agile handling and an upscale design that looks more expensive than it is.

For 2019, Mazda has redesigned the Mazda3 into a fourth generation that it thinks will be desirable for a new reason: an available AWD system. The new option makes this car one of just a few compacts to offer all-wheel traction. Mazda hopes it can turn that distinction into more sales, especially to buyers who might be considering a small crossover or SUV.

The Mazda3’s new AWD system comes only with the car’s larger engine, a 2.5L four-cylinder, and its optional automatic transmission. It powers just the front wheels until they slip, and then directs power to the rear axle.

This isn’t Mazda’s first all-wheel rodeo. It uses a similar i-Activ AWD system in its CX-3, CX-5 and CX-9 crossover utilities, but the carmaker says its latest AWD tech generates less friction than before, to help save fuel.

The Mazda3 is known for being one of the most fun-to-drive economy cars, but our first impression of the new version is that it feels surprisingly dull. The engine responds lazily to the throttle, and the transmission is quick to shift up through its six gears to save fuel. It’s also slow to downshift for acceleration.

There’s a sport mode that helps by forcing the transmission to stay in its lower gear ratios. However, that makes for a lot of pointless engine noise if you’re not enjoying your favourite back road. What I wanted was an in-between setting that made the car feel as lively as the previous generation Mazda3 without sport mode’s twitchiness.

Get aggressive with the throttle in sport mode and the Mazda3 feels quick, but not fast. Blame the extra weight of the AWD system, which adds about 70 kg (or 154 lbs) to the car’s mass.

The new Mazda3’s chassis is better sorted than its powertrain. Handling is sharp, and good steering feel encourages you to take advantage of it.

Ride quality is good as well. The suspension proved firm but not punishing in Ottawa’s post-winter pothole-rich environment. However, my GT-trim test car’s large wheels clunked and banged over the worst road imperfections. Low-profile tires like these make me nervous: Hit a pothole at the right speed and it’s easy to end up with a flat tire.

Mazda redesigned the 3 with a low, aggressive-looking nose and a more fastback-like rear roofline. I mostly like the look, but I have stronger opinions about its effects on visibility from the inside.

The small, high rear window and large blind spots compromise the view to the rear. That forces the driver to rely too heavily on the car’s backup camera and blind spot and rear cross-traffic alerts, all of which thankfully come standard.

Opt for the GT trim’s premium package and Mazda adds automatic rear braking that works with the cross-traffic alert.

Mazda introduced the original 3 in 2004, and three generations later it hasn’t gained much interior space. There’s a lot less rear-seat legroom than in a Honda Civic or Subaru Impreza, two cars that have both grown considerably since the Mazda3 was a new model.

The Mazda3 Sport occupies the small end of the compact hatchback class along with the Toyota Corolla, whose hatch is smaller than its sedan counterpart.

On the plus side, my GT test car was beautiful inside, with dark red seats and dash creating a high-end contrast with the other black panels. The car’s secondary controls are easy to use, and I especially appreciated the console-mounted stereo volume knob.

All Mazda3 trims get an 8.8-inch infotainment display controlled with a dial on the console. The screen’s measurement makes it sound larger than most, but it’s short and wide and looks tiny compared to the Corolla’s 8.0-inch screen, for example.

Android Auto and Apple CarPlay are standard in all Mazda3 trims. GT adds a 12-speaker sound system, and the premium package adds navigation, satellite radio, a garage-door opener and a head-up driver display.

As I write this, the Mazda3 is one of just two compact cars you can buy with AWD. The other is the Subaru Impreza, which comes standard with that company’s all-wheel drive setup. Through 2019, Volkswagen offered its Golf Sportwagen with an AWD option, and the Alltrack was a quasi-SUV version of that car with a taller suspension. Neither of those VWs will be available for 2020.

You can also get a Mazda3 Sport with AWD for $27,000 in GS trim, or $28,900 with an optional luxury package of leatherette seating, sunroof, auto-dimming rearview mirror and a power driver’s seat with memory.

Meanwhile, the Subaru Impreza with standard AWD starts at $20,000 for the sedan and $20,895 for the hatchback. A fully-loaded Impreza is a bit less pricey than the Mazda3 GT with its premium package, but performance is more modest at 152 hp.

For about $30,000, you can get the Subaru WRX sport sedan and its 268-hp engine. However, optioning one to match the Mazda3 GT’s luxury and convenience features takes the price up over $35,000.

In front-wheel drive form, the Mazda3 goes up against a vast field of compacts, most of them less enjoyable to drive but roomier inside.

Mazda has long touted its dedication to making the 3 more fun to drive than most of its compact competitors. In the 15 years since its introduction, the Mazda3 has grown up and taken on a more mature feel to go with its sharp performance.

However, there are now subcompacts that feel nearly as large inside as the Mazda3. This car has grown up into a very handsome and entertaining compact, but it’s about time it filled out.