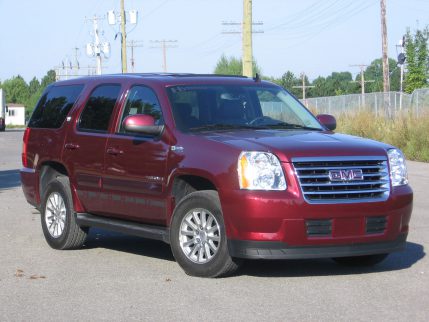 North America’s domestic automakers have a history of building SUVs that dates back to well before that trendy label was created. However, Japanese brands have a strong reputation for building vehicles of all types with impressive longevity, including SUVs that are every bit as capable as domestically designed ones.

So if you’re looking to buy an SUV you can keep for the long haul, should you choose one bearing a domestic nameplate, or a Japanese model? iSeeCars has compiled a helpful list of the SUVs that most often stay on the road until they reach 300,000 km.

All of the vehicles on its list are either domestic or Japanese. To make it easier to digest their data, we’re going to do two articles about the iSeeCars list. First up: the longest-lasting domestic SUVs according to iSeeCars’ research. Later, we’ll take a look at the Japanese SUVs that most regularly hit 300,000 km.

We’ve lumped these four General Motors models together because they have a lot in common. The Suburban, Yukon XL and Escalade ESV are extended-length models. Tahoe, Yukon and Escalade come standard with a shorter body. All have V8 engines.

Despite that, these four models don’t all reach 300,000 km with the same regularity. Five percent of Chevrolet Suburbans reach that distance, putting it in second place. But only 4 percent of GMC Yukon XLs go that far — for fourth place — despite being the same vehicle with a different name.

Likewise, the shorter Chevrolet Tahoe (in sixth place) hits 3.8 per cent, but the similarly sized Yukon only manages 2.8 per cent and eighth place. Meanwhile, just 1.3 per cent of upscale Cadillac Escalades reach 300,000 km, which puts it in 15th place.

Next on iSeeCars’ list is the Ford Expedition and its upscale cousin, the Lincoln Navigator. Older models use a V8, but both switched to a turbo V6 in the mid-2010s.

Like the GM trucks, these two don’t hit 300,000 km with the same frequency. The Ford Expedition is tied for third place, with 5 per cent reaching that marker. The posher Navigator is in ninth place at 2.2 per cent.

The Durango is Dodge’s largest SUV, a three-row model situated between the mid-size and full-size classes. A second-generation model (2004-2009) was based on the now-defunct Durango mid-size pickup truck. Dodge skipped 2010 and redesigned the Durango for 2011 on a platform shared with the Jeep Grand Cherokee. It has three rows of seats and comes standard with a V6 engine. A V8 is optional.

What are common trouble spots in large SUVs?

Here are a few of the features most likely to need attention as these SUVs age:

Operate the door several times and listen for grinding, popping or whining noises, which could indicate worn-out parts. The door should open and close at a measured pace but complete either operation in 10 to 15 seconds. If it stops and reverses direction, something is probably broken. However, you should still be able to open and close it by hand.

Likewise, lots of large SUVs with three rows of seating have power-folding second- and third-row seats. Try them a few times, listening for similar sounds. If you can hear the motor straining or if the seats stop moving, something is probably worn or broken in the mechanism. If a power-folding seat fails, it could get stuck, and you may not be able to move it manually.

Many large SUVs from the last 10 to 20 years offered an air suspension. These systems are usually height-adjustable to add off-road ground clearance and ease entry and exit. The air bags (there’s one at each wheel in most cases) can develop leaks over time, and the compressor that inflates them can also fail.

In trucks with touchscreen systems and built-in navigation, spend some time using the various functions. Expect near-instant responses similar to a tablet or smartphone. Any lag or freezing could indicate flaws with the hardware or software.

If the SUV you’re testing has an electronic 4×4 dial or buttons, try all the settings to make sure the system’s gears engage properly. Watch for warning messages or alerts that could indicate a fault.