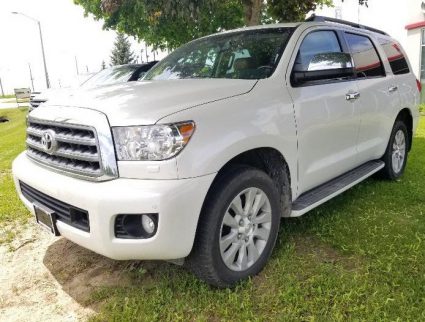 In a previous blog post, we told you about the domestic SUV models most likely to reach 300,000 km, according to iSeeCars. This time, we’re taking a look at the import-branded SUV models that most often reach that high-mileage milestone – all of which are from Japanese companies.

Domestic brands like General Motors and Ford are considered experts in the truck and SUV segments. Meanwhile, Japan’s auto industry has an excellent reputation for durability, something that seems to translate well into long-lasting SUVs.

Toyota Sequoia is a full-size utility based on the Tundra pickup truck which is number one on iSeeCars’ list of the top 10 long-lived SUVs. It uses a V8 engine and is designed to compete with big domestic models like the Chevrolet Suburban and Ford Expedition. According to iSeeCars, 7.4 per cent of Sequoia models stay on the road for at least 300,000 km.

In an older Sequoia, look for oil leaks around the camshaft covers. Also, once the truck is warmed up, turn off the engine and start it again to listen for hesitation.

The Toyota 4Runner is popular among off-road enthusiasts. It also boasts a surprisingly comfortable ride on paved roads. In the ‘00s, Toyota offered a V8 engine as an option. The standard engine was a V6 that remained following a 2010 redesign.

Toyota’s other mid-size SUV is the Highlander. It’s a similar size to the 4Runner but not built for serious off-road driving. Base models use a gas V6, and a gas-electric hybrid engine is an option. Toyota introduced the Highlander in 2001, redesigned it in 2008 and again in 2014.

The Highlander Hybrid is the longer-lasting of the two, in seventh place, with 3.1 per cent reaching 300,000 km. The regular Highlander is in 14th place, at 1.4 per cent.

Leaking water pumps are a common weakness in Toyota engines. Older models have a rubber oil line on the engine that is known to fail. Toyota has since redesigned the part with a more robust metal tube.

The Honda Pilot and Acura MDX are aimed at different buyers, but they have a lot in common. The engine is a 3.5L V6 and the transmission a five-speed automatic. Acura introduced the MDX in 2001, and a second generation ran from 2007 to 2013. The Pilot came along in 2003, and its second iteration lasted from 2009 to 2015.

Most of the known reliability issues are transmission-related. Certain model years were recalled to fix a transmission lubrication problem. Another known problem is a vibration felt while driving. A noisy engine could be caused by a failed timing-belt tensioner.

What Else should I Watch for in a Used SUV?

Large and upscale SUVs like these often come with numerous convenience features that are prone to failing with age. These include the following features:

Have a look at our article about domestic SUVs for tips to help you determine whether these features are working properly.