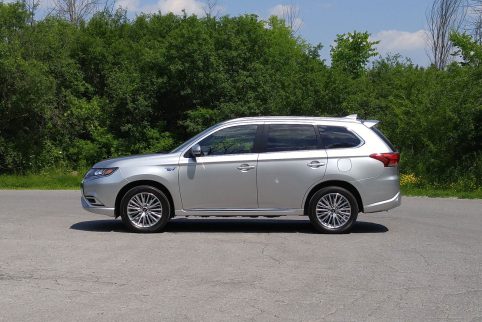 Crossovers and SUVs are a big deal, and there’s also a growing market for plug-in electric vehicles, thanks to various government incentives. Somehow, it took a small Japanese automaker to figure out that combining the two would create a popular vehicle, and thus was born the Mitsubishi Outlander PHEV.

PHEV stands for plug-in hybrid electric vehicle, a label the Outlander displays prominently on its tailgate and front fenders. This is Mitsubishi’s first hybrid model for North America, but not its first plug-in car: The company sold the i-Miev electric car here from 2012 through 2017.

Following its launch in 2018, the Outlander PHEV became the first plug-in vehicle to notch 5,000 Canadian sales in a calendar year. Earlier this year, Mitsubishi also claimed it was the best-selling plug-in hybrid both in Canada and worldwide. Clearly, there was a demand for a more affordable plug-in SUV option: Before Mitsubishi launched the Outlander PHEV, the only plug-in hybrid utilities were upscale models like the Volvo XC90 and Porsche Cayenne.

In 2018, the Outlander PHEV was a significant update to an old design. Mitsubishi introduced this third-generation Outlander in 2014 and freshened its styling in 2016 and 2019.

The Outlander PHEV uses a 2.0L four-cylinder gas engine backed up by two electric motors, one under the hood and the other at the rear axle to provide AWD. A 12-kWh battery promises 35 km of all-electric driving on a full charge, which Mitsu says takes 3.5 hours connected to a 240-volt charger.

In mid-2018, Mitsubishi announced it had updated the Outlander PHEV’s drivetrain with a larger engine, more battery capacity and longer electric driving range. However, those improvements have not made it to the Canadian market yet. For 2019, Canadian models do get new front seats, more sound insulation, a rear spoiler, and minor exterior styling updates.

I kept the Outlander PHEV charged for my first few days with it and enjoyed the smooth, quiet performance that’s typical of an electric vehicle. However, Mitsubishi’s promise of 35 km is optimistic; 25 or 30 km is a more realistic expectation in real-world driving.

When the battery runs down, the transition to full electric to hybrid vehicle is seamless. The engine starts up quietly and smoothly and carries on that way in normal driving. Mitsubishi has done a good job of isolating the cabin from mechanical sounds.

Another plus is the Outlander PHEV’s brakes. Like other hybrids, it uses regenerative braking to help slow the car while charging the battery. In gentle braking, the friction brakes take over as the car approaches a stop, and in the Outlander PHEV that transition is barely noticeable. Not even the hybrid experts at Toyota have worked that out as well as Mitsubishi has.

Mitsubishi says the Outlander PHEV’s two electric motors make a combined 160 hp and 245 lb-ft and the gas engine is good for 117 hp and 137 lb-ft of torque. That makes the Outlander sound like a serious powerhouse, but gauging a hybrid’s performance isn’t as easy as adding up all those numbers. Whatever the total is (Mitsubishi doesn’t publish it), it wasn’t enough to make the Outlander PHEV quick with just me in the car. I wasn’t eager to see what would happen with four adults on board.

On electricity alone, Mitsubishi says the Outlander PHEV is rated at 3.2 Le/100 km. The lack of direct competition makes it hard to judge how efficiently this car uses electricity. Natural Resources Canada says the all-electric Tesla Model X is rated 2.3 Le/100 km in its least-powerful form, which still boasts more than 300 hp. A better comparison might be the Volvo XC60 T8, whose plug-in hybrid powertrain is estimated at 3.8 Le/100 km, but its gas-electric combo makes 400 hp.

Mitsubishi provides separate fuel consumption estimates for when the Outlander PHEV is working as a gas-electric hybrid. Those figures are 9.4/9.0 L/100 km (city/highway), which is essentially no better than the standard four-cylinder Outlander, whose 2.4L engine’s ratings are 9.9/8.1 L/100 km. By comparison, the similarly sized Toyota RAV4 hybrid (which is not a plug-in model) is rated 5.8/6.3 L/100 km.

Between the small battery and a 43L fuel tank (the gas-only model holds 60L), the Outlander PHEV’s total driving range is 499 km. On long drives where charging the battery is impractical, that number shrinks to about 470 km before you literally run out of fuel. The four-cylinder gas-powered Outlander promises a realistic 600 km of highway driving before you need to start looking for a gas station.

The Outlander PHEV rides on a soft suspension that provides a comfortable ride but allows a lot of body roll in corners. That makes it feel ponderous and heavy compared to other modern small and mid-size utilities. Most manufacturers have engineered their crossovers to drive more like cars, with a tight ride and handling, so the Outlander feels like an outlier.

The Outlander’s cabin offers good space in two rows of seats (the regular Outlander is a seven-seater, but the hybrid’s battery and hardware take up the third-row space) and the second row folds flat for a vast cargo area. On the down side, the rear seat cushions are low to the floor and offer little support under the legs.

The worst thing we can say about the Outlander’s dash is that it looks and feels dated. The infotainment touchscreen is on the small side at 7.0 inches, but aside from a tiny volume knob that’s a long reach from the front passenger seat, everything is easy to use.

The Mitsubishi Outlander PHEV starts at $43,498 in SE trim. Based on that and the Outlander’s 12 kWh battery, buyers can apply for a $2,500 rebate from the federal government, and Quebec residents are eligible for a $4,000 provincial rebate. Outlander PHEV buyers in B.C. can also get money back from that province’s government.

The Mitsubishi Outlander PHEV does a lot of things well: It’s comfortable, it boasts a quiet hybrid drivetrain, and its regenerative brakes are among the best I’ve tried.

Ultimately, the powertrain’s short electric driving range is the biggest letdown here, which is unfortunate because it’s also the vehicle’s raison d’etre. Between that and poorer hybrid fuel economy than the comparable gasoline model, it’s difficult to justify the Outlander PHEV’s extra cost. (Of course, your value assessment will depend on where you live and what kinds of government rebates are available there.)

Mitsubishi had a great idea in turning the Outlander crossover into a plug-in hybrid. It’s too bad the powertrain doesn’t live up to the hype.