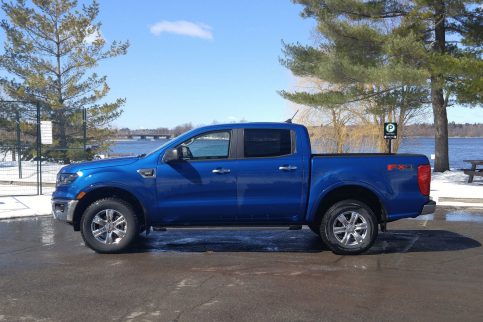 Every year, the auto industry research analysts at J.D. Power poll new-vehicle buyers to find out how happy they were with their purchases during the first 90 days of ownership. The company uses the results to compile its Initial Quality Survey (IQS), which ranks car companies and individual models based on the quality of their designs and manufacturing.

In a previous blog post, we discussed the top-ranked car models in the 2019 Initial Quality Survey. This time, we’re looking at the ratings for SUVs, trucks and vans.

J.D. Power ranks brands and models based on the number of problems reported per 100 vehicles (or PP100). As in golf, a lower score is better, as a higher number means more people were dissatisfied with their purchases.

J.D. Power calls out Land Rover for making the largest quality improvement: its PP100 ranking dropped to 123 this year from 160 in the 2018 IQS. Despite that big jump, the British SUV brand still finished second-last in the overall ranking.

All four of these truck brands finished below average for overall quality.

J.D. Power splits its IQS rankings for the SUV, truck and van segments into 11 categories. Read on to find out which models boast the best initial quality.

The Kia Sportage makes a good impression with European-inspired styling. It’s easy to mistake this small utility for a Porsche Macan from far off. Notably, all three top finishers in this category are from Kia and its parent company Hyundai. In fact, the three Hyundai Motor Group brands — Hyundai, Kia and Genesis — finished in the top three for overall quality.

Despite being marketed as a compact, the Chevrolet Equinox’s size pushes it closer to the mid-size category. It’s a spacious, nice-driving vehicle that stands out with the segment’s only diesel engine option.

Hyundai redesigned its popular Santa Fe for 2019, and this fourth-generation model boasts the highest quality in a competitive category. In doing so, it bucks the trend of new designs trailing carry-over models in terms of quality. Top-end Ultimate trim combines luxury features with impressive fit and finish.

The Chevrolet Tahoe is first among full-size SUVs, a significant feat considering it competes against the Toyota Sequoia, whose maker is well-known for its high quality. A recent study by iSeeCars named the Tahoe as one of the SUV models most likely to reach the 300,000-km threshold.

The BMW X4 is the dramatic member of BMW’s compact SUV family. It has a lot in common with the X3, but comes dressed in a more showy body. BMW’s turbocharged four- and six-cylinder engines are impressive machines, and the latest generation of iDrive infotainment system is easy to figure out.

This ultra-refined utility vehicle moves into top spot in its category this year after placing second in 2018. In the RX, Lexus combines strong performance with impressive comfort. Lexus’s parent company, Toyota, also won a J.D. Power award this year for quality control at the Cambridge, Ontario factory that builds the RX.

We’re not surprised to see that the Cadillac Escalade fared well in this year’s IQS: It shares much of its engineering with the Chevrolet Tahoe. Sure, the Escalade is ostentatious, but this posh and powerful luxury vehicle helped create the still-growing market for upscale utility vehicles.

After a seven-year hiatus, Ford brought the Ranger name back with this all-new 2019 model. At first glance, it seems Ford has managed to avoid the first-year bugs that drive quality down. But Ford has had a few years to work out the kinks, as this truck has been on sale in other markets for several years.

J.D. Power says carry-over models tend to boast the best quality, and the Silverado HD is proof of that. The 2019 model marks the end of a generation, as Chevrolet has just launched a new design for the 2020 model year.

Kia is one of a handful of car manufacturers that have stuck with the minivan. The Sedona makes a good case for itself with a strong engine, good value and a long list of options that turn it into a legitimate luxury vehicle. Also playing into its favour is the intuitive UVO infotainment system.