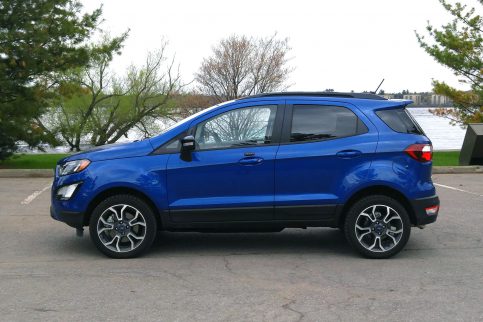 Given the auto industry’s fast pace, it took Ford a long time to jump on the subcompact crossover bandwagon with the Ecosport.

Ford was similarly deliberate when it introduced the compact Escape in 2001, about four years after the Honda CR-V and Toyota RAV4. Despite giving up that head start, the Ford Escape quickly became one of the most popular cars in its segment.

Now Ford hopes the Ecosport can make a similar move. It was new to North America in 2018, but this is the model’s second generation—the first has been available in other parts of the world since 2013.

The Ecosport’s awkward, upright body puts function before form. Inside, generous headroom makes this little SUV feel larger than its exterior suggests, and the high seating position is good for visibility. However, the narrow body means there’s no surplus of shoulder room up front, and we’d hesitate to put three adults in the back for long drives.

If you do hit the road with a few friends, the cargo area is tall enough to stack luggage behind the rear seat. Folding down the back seats turns this tall crossover into a tiny van. The cargo floor can be set to two different heights, the higher of which forms a flat surface with the folded seats. 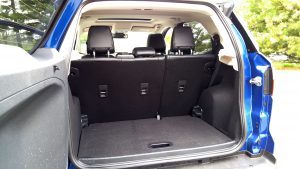 Ford updated the aging Ecosport’s design inside and out before bringing it to Canada. The simple dash looks modern with its floating 8.0-inch touchscreen. My SES-trim test car’s standard niceties include single-zone automatic climate control, heated front seats and steering wheel, navigation, backup sensors, blind spot warning, rear cross-traffic alert and an auto-dimming rearview mirror. On the outside, there are 17-inch wheels, heated side mirrors, fog lights and front LED signature lighting.

The base S trim package still includes air conditioning, but with manual temperature controls. It also leaves out the auto-dimming mirror and makes do with a 4.2-inch display for the Sync infotainment system.

Moving from SE to the better-equipped SES and Titanium is a $4,500 price jump. That’s a lot of cash to add to a subcompact vehicle, but it also brings a more powerful engine and AWD.

In SES trim, the Ecosport comes standard with a 2.0L four-cylinder engine. On paper, its 166 hp and 149 lb-ft of torque sound like plenty for a small vehicle. In practice, the engine does its best work at high revs, so hilly highway driving means a lot of noise. It doesn’t help that the transmission is lazy about downshifting for acceleration. A sport drive mode makes it more responsive.

Cutting some weight by choosing front-wheel drive (the SES has standard AWD) would help, but front-drive models use a 1.0L turbo three-cylinder. It makes significantly less power, but its maximum torque comes at a lower speed, which is useful in city driving.

SES gets a sport-tuned suspension unique among the Ecosport’s four trims. The idea is to create a sportier driving feel, but it’s firm enough to be uncomfortable on rough pavement.

The Ecosport’s tall shape gets blown around easily in the wind, so long highway drives can require constant steering corrections, which gets tiring.

Ford’s estimates for the smaller engine (it’s FWD only, remember) are 8.6/8.1 L/100 km (city/highway), limiting its advantage to city driving.

As with the compact Escape nearly 20 years ago, the subcompact Ford Ecosport joins an established field of competitors. They include the Honda HR-V, Toyota C-HR, Mazda CX-3 and Chevrolet Trax. Nissan has two subcompacts, theQashqai and Kicks. Volkswagen also competes here with an AWD version of its compact Golf station wagon called the Alltrack.

Style-wise, the Ecosport is the least elegant-looking of the bunch, but feels roomier inside than the CX-3 or the Trax. The Honda HR-V benefits from smart space efficiencies borrowed from the Fit hatchback. The Alltrack boasts a large cargo area thanks to its longer body.

The CX-3 and Golf Alltrack are favourites for their fun handling. However, the Ecosport’s competent driving feel belies its tall, ungainly body.

The Ecosport was my ride on a road trip from Ottawa to Boston and back, seat time that highlighted a mature feel despite its size. However, the high-revving 2.0L engine would benefit from more low-end power and the SES trim’s firm suspension is annoying.

Start by looking at the more affordable SE trim, and decide whether its little 1.0L engine and FWD are good enough for you. Adding the 2.0L and AWD is a $2,500 move that might be worth it, given the SE’s already decent list of features. Regardless of your powertrain preference, get the Ecosport on a busy, fast highway to judge how you like its high-speed performance.

I came away mostly charmed by the Ecosport. It’s a well-done small crossover that just needs a little boost under the hood.