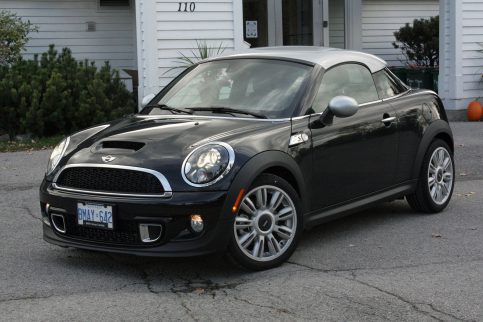 While many sports cars are two-seaters, not all two-seaters are sporty. Take this week’s collection of used cars: they all have seats for two (although one of them cheats with tiny rear seats) but each vehicle in this quartet is aimed at a very different type of driver.

The Honda CR-Z combines a two-seat interior with a thrifty gas-electric hybrid powertrain. The rear-engined Smart Fortwo city car advertises its seating capacity in its name. Scion’s iQ thinks it looks smart by combining the Fortwo’s design concept with Toyota reliability. Finally, the Mini Cooper Coupe is the sports car of the group, though it’s one of the weirdest vehicles the brand has sold.

Honda dubbed the CR-Z a sport hybrid, and while it looks the part, that claim was a stretch where its performance is concerned. Its little four-cylinder engine and an electric motor team up to make 122 hp and 128 lb-ft of torque. A 2013 update boosted power to 130 hp and 140 lb-ft. The CR-Z was unique among hybrids for its manual transmission, which new buyers could option to a continuously variable automatic.

The CR-Z lives up to Honda’s reputation for durable cars, with little indication of known issues in its mechanical systems. Among the few known weak points are outside door handles that require a firm tug to open. Some owners say they have to pull hard enough they’re worried they’ll break the handle.

When shopping for a used CR-Z, inspect the fog-light lenses for cracks. CR-Z-specific replacements are pricey, but fog-light housings for a Civic of the same era will fit, and cost a lot less.

Mercedes-Benz’s Smart brand came to Canada in 2005 with a tiny diesel engine. A 2008 redesign replaced the diesel with a more powerful gas engine that improved the car’s performance. Smart updated the Fortwo again in 2016 with yet more power and the car’s first manual transmission for the Canadian market.

Diesel models use glow plugs to warm the engine up and help it start in cold weather. Failed plugs will be indicated by a dashboard warning. If you’re comfortable working on your own car, replacing these is a straightforward job.

Other diesel engine-related issues include fuel leaks, a faulty fuel pump or a cracked fuel rail.

The Fortwo’s transmission is technically a manual, but has an automatic clutch. The clutch actuator lever can break, leaving the car stuck in neutral.
In newer models, the clutch actuator itself can make a squeak or creak noise when the engine is started.

In 2008 through 2015 models, there’s a radiator coolant hose that can rub against part of the car’s structure and develop a leak.
Low coolant can cause overheating, and some owners say that by the time the coolant temperature warning comes on, the engine may already be damaged.

Watch for a heater fan that stops blowing.

Complaints of engine valvetrain malfunctions are not widespread, but the fix is expensive.
Failed fuel injectors appear to be more common.

A transmission that can’t make up its mind at low speeds could be normal for the Fortwo.

Mechanically, the Mini Cooper Coupe is largely the same as the conventional hatchback. All Coupes use a 1.6L engine. In base trim it makes 121 hp and 118 lb-ft of torque. The Cooper S adds a turbo for 181 hp and 177 lb-ft, and a John Cooper Works version bumps power to 208 hp and 184 lb-ft. A six-speed manual is standard, and both base and Cooper S models could be optioned to an automatic.

Most known issues with the Mini Coupe are engine-related. A loud diesel-sounding rattle when the engine is cold might indicate a worn timing chain, which is an expensive fix. Here’s a video demonstrating the sound.

Mini issued a service bulletin to help its technicians diagnose and fix this problem.

Mini USA recalled the Cooper S for an electric water pump that could catch fire. However, Mini Canada did not issue a recall for this problem.

Turbo cars can develop a blockage in an oil line that keeps the turbocharger lubricated. If left unchecked, the turbo can overheat and seize.

Another turbo quirk is a failed fuel pump. Symptoms include a stalling, sputtering engine that may take longer than normal to start.

Finally, a Cooper Coupe engine that won’t rev beyond idle may have a frozen throttle.

Toyota brought its high-value Scion brand to Canada in 2011, following its U.S. launch in 2003. The Tiny iQ joined the lineup in 2012 with a four-cylinder engine making 94 hp and 89 lb-ft of torque. All cars have a continuously variable automatic transmission.

We’re cheating a bit by including the iQ in this article, as it is technically a four-seater. The front passenger seat is positioned further forward than the driver’s to create more room for one rear-seat rider. In reality, the seats are best folded out of the way, as leaving them in place eliminates virtually all cargo space.