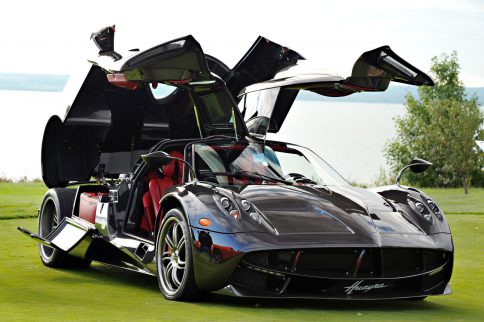 The eye of a car-lover can behold nothing more beautiful than the vehicles on show at a Concours d’Elegance. Rare breeds and classic cars restored to better-than-factory conditions underscore the beauty and elegance of the horseless carriage. The entries in the 7th Annual Cobble Beach Concours d’Elegance are no exception.

The concept of a concours d’elegance originated in France in the 17th century. Aristocrats used to parade their carriages through the parks of Paris on weekends and holidays in the summer. This eventually transitioned into the competitions of elegance we see today. “Concours d’elegance” is French for “competition of elegance.”

Below are a few examples from the Cobble Beach Concours d’Elegance’s previous years.

The concours did indeed have this unique vehicle—not really a buggy anymore but perhaps not quite a car yet—on display in 2014. Henry Seth Taylor, a jeweller and clockmaker, designed and built the steam buggy by hand. He unveiled it at the Stanstead Fall Fair in Quebec the year of Confederation. Unfortunately, it was crashed into a creek shortly afterwards.

According to online sources, the steam buggy was found lying in pieces in the 1950s, the wood rotting away, by US collector Richard Stewart. Stewart restored it. In 1983, the Canada Science and Technology Museum bought it from Stewart and has held it in its collection ever since.

Also on display at the Cobble Beach Concours d’Elegance in 2014 was a Pagani Huayra, the newest model available that year from Pagani Automobil. It was marketed at almost 1.2 million euros. Pagani vehicles are all custom-made, following Pagani’s approach that art and science go hand-in-hand.

Sitting roughly between the Taylor steam buggy and Pagani Huayra is this elegant vehicle, a 1932 Cadillac. It participated in the concours in 2015. According to the competition’s website, only three are known to survive. Greg Wallace, curator of the Cadillac Museum, researched this car’s history for the owner and authenticated it via the original build sheet. This vehicle was restored in the 70s, used in various high-profile events, like the Rose Bowl Parade, and once owned by Thomas Cadillac.

The concours’ website has not listed—at time of writing—the cars entered in this year’s competition. But if previous highlights tell us anything, you can expect a highly curated collection of rare, exotic, and classic cars to feast your eyes on.

The concours takes place just north of Owen Sound, on the shores of Georgian Bay, on September 14 and 15, 2019. Several events are planned. The concours proper takes place on the 15th. However, on the 14th, you can participate in Cars & Coffee, a car show. Participating cars must be 25 years old or older. You can find all the information for this car-lover’s weekend on the Cobble Beach Concours d’Elegance website.