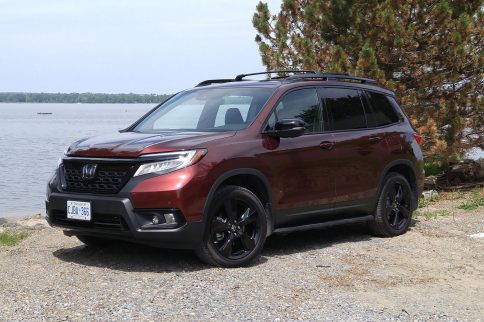 As the popularity of crossovers and SUVs continues to grow, car companies are expanding their lineups to keep up with demand. Honda’s latest new model is the Passport: A mid-size, five-seat utility that fits between the compact CR-V and three-row Pilot. Honda also offers the subcompact HR-V utility, so the Passport brings the company’s SUV offerings to four.

Honda builds the Passport on a shortened version of the Pilot’s platform, and the two share a number of styling cues, but the Pilot’s longer body looks more elegant than its taller-yet-smaller new sibling.

The Passport is powered by a 3.5L V6 engine and a nine-speed automatic transmission and comes standard with AWD.

Cylinder deactivation helps the Passport’s engine save fuel at cruising speeds. You have to pay really close attention to hear it at work, because Honda also uses active engine mounts to counteract vibration generated by the inactive cylinders.

Honda’s other fuel-saving trick is an engine idle-stop system that shuts the engine down at red lights.

I took my Passport Touring test vehicle for back-to-back drives with a friend’s 2019 Pilot in the same top-end Touring trim. With less weight to move around, the smaller Passport feels a little livelier in acceleration. What stood out more, though, was that the Passport is noisier in full-throttle acceleration than the Pilot, suggesting that the newer, smaller vehicle comes with less sound-deadening gear.

When Honda introduced its nine-speed transmission a few years ago, it generated complaints about rough shifting and searching for the right gear at cruising speeds. The company has evidently worked to eliminate those flaws: My Passport test car’s transmission shifted smoothly and found the correct gear for any situation.

If you enjoy getting places quickly, the Passport’s V6 will please with its high-revving nature. Push the engine to its redline and it generates a sports car-worthy soundtrack. In an auto industry full of samey-sounding turbo four-cylinders, this V6’s character is a nice treat.

Even the larger Pilot is a little more efficient than the Passport, at 12.5/9.8, probably because its longer, lower body is more aerodynamic.

Beyond its smaller size and fewer seats, the Passport was conceived for a different audience than the Pilot. It has 20 mm more ground clearance for easier off-road driving, and its shorter front and rear overhangs make it better at scaling obstacles.

My comparison drive with the Pilot revealed the Passport also has a firmer suspension. That may appeal to drivers expecting a more rugged feel, but the stiff ride can get uncomfortable on damaged pavement.

Still, the Passport is a nice vehicle to drive, with its smaller size and lighter weight contributing to sharper handling.

The Passport’s front seats are wide, supportive and comfortable. There’s more front-seat headroom than the Ford Edge — one of the most popular Passport competitors — which feels comparatively snug inside. Still, the Honda’s overall passenger volume is only a little better than the Edge’s.

Rear-seat legroom is actually more generous in the smaller Passport. The two Honda SUVs share the same wheelbase but the Passport’s second-row seats are placed further back in the car, since there’s no third row to worry about.

With the Passport’s rear seats in place, cargo volume is 1,430L, increasing to 2,854L with the rear seats folded. Both measurements outclass the Ford Edge and Hyundai Santa Fe, two of the best-selling vehicles in this class.

A digital speedometer and well-done infotainment display contrast with the Passport’s dated-looking climate controls. However, the latter are so easy to use that it’s difficult to fault Honda for not messing with a design that works.

The Ford Edge, Chevrolet Blazer, Nissan Murano and Hyundai Santa Fe are notable Passport competitors. Honda presents its entry as a rugged option, but it’s easily outdone in that regard by the Jeep Grand Cherokee and the Toyota 4Runner. The Murano angles for buyers with upscale intentions, while the Ford Edge drives a lot like a mid-size car.

This is Honda at its best. A strong V6 lends the Passport more character than is common in this class, while the roomy interior makes it practical and easy to live with. If you’re after a family vehicle with some personality, the Passport deserves your attention.