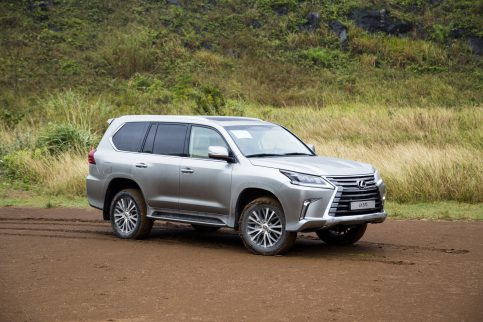 As a mainstream vehicle type, the luxury SUV is a modern invention. Previously, large upscale utilities existed on the fringes of the marketplace, with the oldest models coming from humble roots. Land Rover’s Range Rover began in the 1970s as a rugged means of traversing the English countryside, and the original Mercedes-Benz G-Wagen of the late 1970s (now called the G-Class) was a military vehicle.

In the years since these models have morphed into two of the world’s most luxurious and desirable SUVs and have helped create today’s market for large upscale utilities.

If you’re considering one of these posh trucks as your first SUV, here’s some general information about how to shop for a used 4WD vehicle. (https://www.blog.ontariocars.ca/what-you-should-know-about-a-used-4wd/)

Read on for specific issues to watch for in a used Range Rover or G-Class, along with a few of their competitors.

Britain’s Land Rover introduced the third- and fourth-generation Range Rover models in 2002 and 2013, respectively. Through 2012, all Range Rovers had V8 power; the lighter, aluminum-bodied 2013 design got a supercharged V6 for entry-level models.

Watch for a musty smell from the air conditioning. (https://www.rangerovers.net/threads/musty-smell-from-a-c.63706/)

This owner and others say their Range Rovers very occasionally shift into park and turn off automatically in stop-and-go traffic. (https://www.rangerovers.net/threads/2017-rr-automatically-shuts-itself-off.275474/)

A clunking sound from the rear end when accelerating could be caused by fuel sloshing in the tank. (https://www.rangerovers.net/threads/l405-clunk-in-rear-when-accelerating-from-stop.334540/)

This discussion is about a warning light related to the automatic emergency braking system. (https://www.rangerovers.net/threads/new-2017-arrived-aeb-error-message.262130/) 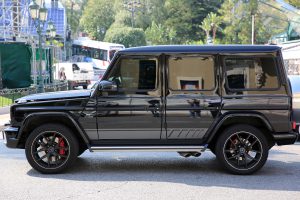 While the G-Class has moved way upmarket in its 30-plus years of existence, its appearance changed very little until a 2019 redesign. V8 engines are most common, and later model years included AMG-tuned versions with big power.

Here, G-Class owners discuss different brands of batteries and which ones tend to last longest. (https://clubgwagen.com/forum/viewtopic.php?f=18&t=14689)

This owner’s attempts to replace brake calipers led to a common G-Class issue: a failed steering lock whose replacement is a serious pain in the butt. (https://clubgwagen.com/forum/viewtopic.php?f=18&t=14171&start=10)

Of the vehicles discussed in this article, the G-Class will likely be the most expensive to repair and maintain. In all likelihood, it will also be more expensive to buy used than the others. 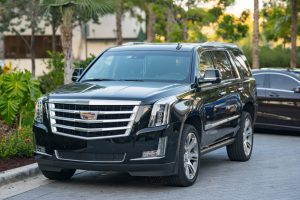 A used Escalade will have more upscale features than its siblings, such as cooled seats, navigation, a power tailgate, power-adjustable pedals, electric running boards, and an electronically controlled suspension. If the truck you’re looking at has these items, make sure they’re working, because they’ll all be expensive to fix.

Here’s a discussion about faulty cruise control, which appears to be a common issue with GM’s big trucks. (https://www.gm-trucks.com/forums/topic/120988-2008-cruise-control-problems/)

Another known issue is a water leak into the cargo area, which warrants a pre-purchase check for wet spots in the carpeting back there. (https://chevroletforum.com/forum/tahoe-suburban-25/water-leak-cargo-area-2008-tahoe-18595/) 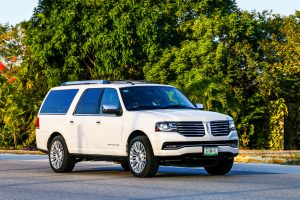 Despite arguably being Lincoln’s best-known nameplate, the Navigator went largely unchanged from 2007 through 2017. A 2015 styling update came with a turbocharged V6 engine to replace the previous V8.

The Navigator has a lot in common with the Ford Expedition, and there are family ties to the Ford F-150, so some known issues apply to all three models. Like the Escalade, the Navigator comes standard with more luxury features than its utilitarian relatives. Spend some time testing to make sure all of them work as they were designed to.

When test driving, watch for strange behaviour from the Navigator’s transmission. (https://www.ford-trucks.com/forums/571520-transmission-problems.html)

The Navigator’s rear wiper motor is known to short out and drain the battery. (https://www.ford-trucks.com/forums/1319236-07-expy-dead.html)

With the truck running, make sure the front and rear climate systems respond properly to their controls. 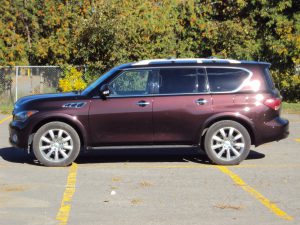 Infiniti’s first luxury SUV was the QX4, a variant of the 1990s-era Nissan Pathfinder. Infiniti got serious about upscale SUVs in 2004 with the Nissan Titan pickup-based QX56, the brand’s first full-size, V8-powered utility. First-generation models ran from 2004 through 2010, and the second-gen came along in 2011. Infiniti changed this truck’s name to QX80 in 2014.

Here’s a discussion among QX owners whose trucks wouldn’t start or appeared to have a dead battery, only to come back to life on their own later. (https://forums.nicoclub.com/2011-qx56-electrical-problem-t534592.html)

Here’s a chat about engine cooling fans that seem to engage unnecessarily. (https://forums.nicoclub.com/2016-qx80-engine-roar-and-ticking-t613744.html) 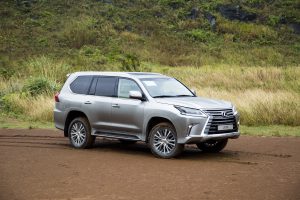 Unlike many Lexus models, the LX does not have an analog in parent company Toyota’s North American lineup. Instead, it’s a renamed and gently restyled version of the Toyota Land Cruiser sold in other parts of the world. The sole engine is a 5.7L V8.

The LX has an air suspension that can automatically adjust the truck’s ride height. Here’s a discussion about that specific function (https://www.clublexus.com/forums/lx-3rd-gen-2008-present/826042-funny-noise-in-ahc.html), while this chat is about repairing and maintaining the air suspension system. (https://www.clublexus.com/forums/lx-3rd-gen-2008-present/831740-cpo-question-air-suspension-repair.html) If you want to get technical, here’s a more in-depth description of the LX’s air suspension. (https://forum.ih8mud.com/threads/lx570-ahc-basics.1053154/)

Here’s a discussion about the LX’s remote engine start function, which can be used via a smartphone through the Toyota Enform app. (https://www.clublexus.com/forums/lx-3rd-gen-2008-present/858287-remote-start-won-t-work.html