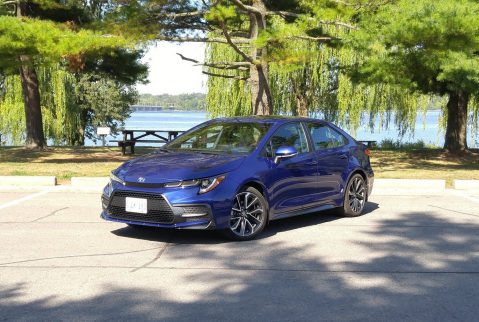 Last year, Toyota kicked off an effort to sell its Corolla compact to drivers looking for something more than basic transportation. A redesigned hatchback introduced in the summer of 2018 was the first Corolla in a long time that looked anything like sporty. 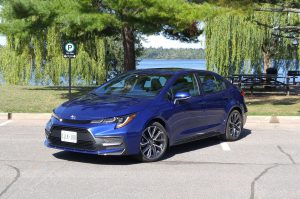 An all-new 2020 Toyota Corolla sedan followed earlier this year. Its subtler styling is aimed at a more conservative crowd, but Toyota promises a responsive driving experience, just as it did with last year’s hatchback.

My sharp-looking Corolla SE test car came with the more powerful of two available engines, which Toyota matched with a six-speed manual transmission. That’s a good start for a car that promises to be more fun than before.

Most 2020 Toyota Corolla trims use a dull 1.8L engine carried over from the previous-generation car, but the SE and XSE trade up to a 2.0L version of the brand’s new “dynamic force” four-cylinder.

If you’re buying a car for any reason other than to meet your basic transportation needs, the 2.0L is the one to get. It feels strong and eager to run to its 7,000-rpm redline. That works well with the SE’s easy-shifting six-speed manual transmission, whose clutch delivers enough feel to make it easy to drive smoothly. The Corolla’s optional transmission is an automatic CVT.

That’s where the good times end, however. The Corolla’s handling is safe, rather than sporty, and its dull steering feel does nothing to encourage enthusiastic driving. 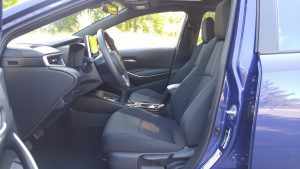 The Corolla has a well-known reputation for providing practical everyday transportation, so I was happy to find useful front-seat headroom, even with an optional sunroof installed.

Rear-seat headroom is less generous, owing to theatre-styling seating that raises the rear cushions higher for a better view out. Unfortunately, that also makes it easy to knock your head getting in and out.

Toyota makes the rear-seat headrests integral with the back cushion, so you can’t remove them for better visibility as you might in many other cars. 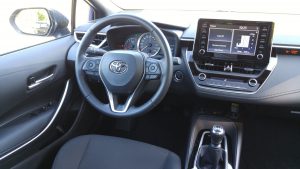 My test car’s interior looked and felt like quality all around. There’s a Germanic feel to the design, but the all-black colour scheme — including the headliner — made the cabin feel closer than it is.

If you want the Corolla’s slick available digital gauge cluster, you have to move up to the XLE or XSE trims. The SE gets old-school analog gauges.

My test car’s average fuel consumption was 7.5 L/100 km in a week of driving. Toyota’s estimates for the Corolla SE with manual transmission are 8.2/6.5 L/100 km (city/highway).

Toyota prices the Corolla SE at $22,290 and my test car had the $2,000 SE Upgrade option package, which adds 18-inch wheels and tires, a heated steering wheel, wireless smartphone charging, and a sunroof.

The Corolla’s highest-profile competitor is the Honda Civic, whose adventurous styling fits well with its more youthful driving feel and sharper handling. A Civic sedan in Sport trim costs more than my Corolla SE tester and has a bit less power, but its 2.0L engine feels just as eager, and its manual transmission is more fun to use.

A Hyundai Elantra Sport nearly matches the Civic Sport’s price and has a 201-hp turbo engine and sport-sedan handling that make even this newest Corolla feel dull.

Kia redesigned its Forte compact sedan for 2019, but only offers a manual transmission in a single basic trim. There’s also no option to upgrade the 147-hp engine to something more interesting. (However, the Forte hatchback offers the same turbo motor as the Elantra Sport.)

The Mazda3 is a lot of fun and its GS trim is a good match price-wise, but its small cabin makes the car feel out of touch with the rest of the segment.

Volkswagen makes a sporty GLI version of its Jetta sedan, but it starts at nearly $32,000.

In redesigning the Corolla, Toyota focused on the car’s strongest traits: it’s roomier, it looks and drives better, and it’s still impressively efficient. I wouldn’t call it more fun than its predecessor, and it certainly isn’t the most entertaining car in its class. However, it’s certainly less boring: there’s a swagger in its appearance and a confident driving feel that was missing before. As basic transportation goes, this is about as good as it gets. 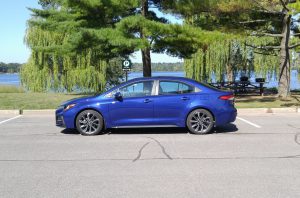