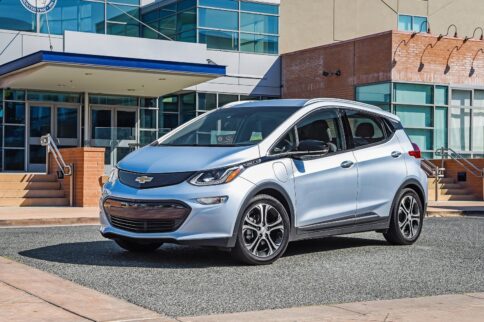 Electric vehicles (EVs) are becoming more affordable as the technology improves and the cost of making EV-specific components like batteries and motors comes down.

But while new electric vehicle (EV) prices are decreasing, they are still more expensive than comparable gas and hybrid models and may be out of reach even with government rebates.

One solution is to shop for a used EV, which may depreciate more quickly than other used cars because of how quickly battery and motor technology is evolving. The oldest mainstream EVs have been on the road since 2011 and 2012, which means a used one can be quite affordable.

But if you’re unfamiliar with EV technology, it can be hard to tell if a used EV – which may no longer be covered by its factory warranty – is in good shape.

Should you worry about an electric vehicle’s battery life?

Before we get into specific items to look out for in the used EV models we’re discussing today, your biggest concern should be the health of the car’s battery. All rechargeable batteries degrade and lose energy capacity over time. There are a couple of ways to determine the health of the battery in an EV you’re test-driving.

If you have enough time – say, if the dealer lets you keep the car overnight – you can charge it and compare the car’s current projected driving range with what the manufacturer promised when the car was new.

A more reliable method is to take the car to a dealer service department, where a technician can run a diagnostic check on the car and tell you what percentage remains of the battery’s original capacity.

Several factors can reduce a battery’s capacity more quickly, including those you can’t control — hot weather, for example – and those you can, like the frequent use of Level 3 fast charging. Also, the more often you use most or all of the battery’s charge, the more quickly it will lose capacity. Having a dealer service department do a pre-purchase inspection can reveal clues about how the car was driven and charged by its previous owners.

What else should you watch for in a used EV?

Just as you would in a gas-powered car, listen for clunking sounds from an EV’s suspension or steering, which indicate worn-out parts. On a quiet street with no traffic around, hit the brakes. Grinding sounds, vibrations or a pulsation from the brake pedal point to worn friction-brake parts. The EVs we’re discussing here all have brake and suspension systems that wear out over time, so you can expect to have to replace them at some point.

Operate all of the electrical and electronic features. Touchscreen functions should respond quickly. If the screen goes dark or the system reboots on its own, that could indicate either software or hardware issues.

Finally, run the car’s air conditioning system through all its settings. The heater in an EV works differently than in a car with a combustion engine, but it should make heat right away. Likewise, the A/C should start making cold air within about 15 seconds of turning it on.

At its 2017 introduction, the Chevrolet Bolt EV was notable for its 383 km of driving range, the best of any non-premium electric car. In 2020, range increased to 417 km. All Bolt EV models boast 200 hp from their electric motor.

During your Bolt test drive, listen for squeaking or creaking sounds from the front end as you turn the steering wheel or drive over large bumps. Some owners have traced this sound to the rubber bushings that isolate the front suspension sway bar from the car’s body.

If a Bolt EV displays a “conditions not correct for shift” error message and won’t go into gear, the first thing to try is disconnecting and reconnecting the 12-volt battery under the hood. If the problem persists, check its voltage. That battery boots up the car’s various computer systems when you press the start button, and if it’s weak, it can cause all kinds of weird behaviours in an EV, like this Bolt EV that would neither go into gear nor turn off.

Many Bolt owners complain of issues with the car’s infotainment touchscreen, such as a frozen display. When test-driving, spend some time using the system and note any delayed responses or unexpected reboots, which could point to an issue with the screen itself or the software that controls it.

In summer 2021, Chevrolet recalled Bolt EVs from the 2017 through 2019 model years to replace batteries that could catch fire if charged beyond 90 per cent of their capacity. If you’re looking at a car from these years, verify that the battery has been replaced.

In 2012, the Ford Focus Electric had a 143-hp motor whose battery promised 122 km of driving range. In 2017, a larger battery improved the car’s range to 185 km, according to Natural Resources Canada estimates. Ford discontinued the Focus Electric after 2018, along with the rest of the Focus lineup.

Here’s a discussion about a “stop safely now” message some Focus Electric owners have had flash up on their cars’ dashboards. Ford issued a service bulletin related to this that suggests the cause could be a leak in the battery’s cooling system or corrosion on a battery connector caused by a water leak.

Several Focus Electric owners say they’ve experienced a car that won’t move after shifting into gear. In some cases, this can happen if you shift too soon after turning the car on. If this happens, check whether the green “ready to drive” light is on in the gauge cluster. If not, turn the car off and on again. If it still won’t go, turn it off, wait a few minutes, and then give it another try.

Here, Focus Electric owners discuss a thunk sound from the car’s drivetrain, and whether that should be considered normal.

In 2017, the Hyundai Ioniq was the company’s first purpose-built electrified car. The Ioniq Electric is one of three versions, the others being plug-in hybrid (PHEV) and conventional hybrid models. In early Ioniq Electric models, the motor produces 118 hp and, when new, the battery promised 200 km of driving range on a full charge. A 2020 update brought a larger battery with 274 km of range and a more powerful 134-hp motor.

You may hear banging or popping sounds from the back of an Ioniq Electric when driving down a long hill. This is apparently caused by the air pressure inside the car’s battery pack adjusting to increasing atmospheric pressure and is considered normal. (https://www.ioniqforum.com/threads/3-bangs-from-rear-during-a-long-decent-full-ev-2020.35040/)

If you hear an annoying rattle from the rear of the cabin, check where the folding rear seats latch to the car’s structure. (https://www.ioniqforum.com/threads/rattle-from-the-back-door.35513/)

The Ioniq Electric has passive keyless entry that lets you unlock the doors by pushing a button on the handle with the key fob in your pocket or handbag. Some owners say the button on the driver’s door is prone to failure. (https://www.ioniqforum.com/threads/door-handle-push-button-not-working.33118/)

A few Ioniq owners say the rear door handles on their cars have a trim piece that can fall off. (https://www.ioniqforum.com/threads/rear-door-handle-breaks-again.36277/)

The Ioniq Electric has steering wheel-mounted paddles that control how much regenerative braking happens when you take your foot off the accelerator pedal. Here’s a discussion about whether it’s more efficient to use a higher regeneration mode or simply slow down with the brake pedal. (https://www.ioniqforum.com/threads/regenerative-braking-again.23681/)

The first-generation Leaf has a 107-hp electric motor and a single-speed transmission that is typical of modern EVs. Driving range improved over the first-gen Leaf’s run, and 2017 models promised 172 km on a fully charged battery when they were new. Nissan redesigned the Leaf into a second generation for 2018.

If you’re looking at a first-generation Leaf with chrome door handle trim, check the fit of that trim piece. Some owners say it can begin to separate from the door handle. (https://www.mynissanleaf.com/viewtopic.php?f=30&t=23465)

During your test drive, note whether the brakes slow the car smoothly. In this discussion, Leaf owners complain about brakes that get grabby sometimes, especially at low speeds. (https://www.mynissanleaf.com/viewtopic.php?f=8&t=6086&hilit=+grabby#p138728)

Inspect the carpet in the driver’s-side footwell. If it’s wet, a drain hose for air-conditioner condensation may be leaking or disconnected. (https://www.mynissanleaf.com/viewtopic.php?f=30&t=12149)

Finally, the Leaf has a conventional 12-volt battery, and several owners posting in discussion forums complain of dead batteries, especially after the car is left sitting for as little as two weeks. This is important, as the Leaf needs a working 12-volt battery to “start” the car, just like a gas-powered vehicle.

Here’s a handy guide to shopping for and choosing a used Nissan Leaf. (https://www.mynissanleaf.com/viewtopic.php?f=27&t=26662)

The Volkswagen E-Golf is a plug-in electric version of the company’s Golf compact hatchback. At its introduction in Canada, it promised about 200 km of driving range and 136 hp from its electric motor. The 2020 model year was the E-Golf’s last in Canada. If you research the E-Golf online, you’ll see references to 2015 and 2016 models that were sold in the U.S. before the car came to Canada. Those cars had a smaller battery and less driving range.

Here’s a discussion about the E-Golf’s charge-port lock, which holds the charging cable in place. Some owners wish the car did not have a charger lock, while others complain that their E-Golf’s lock doesn’t work. (https://www.myvwegolf.com/forum/viewtopic.php?f=11&t=529 and https://www.myvwegolf.com/forum/viewtopic.php?f=11&t=184)

Some E-Golf owners have had an issue where the car’s charge port won’t release the charging cord. (https://www.myvwegolf.com/forum/viewtopic.php?f=12&t=839)

If you start an E-Golf and shift into reverse only for the car to roll forward instead, owners suggest giving the car more time to boot up after pushing the start button. (https://www.myvwegolf.com/forum/viewtopic.php?f=12&t=913)