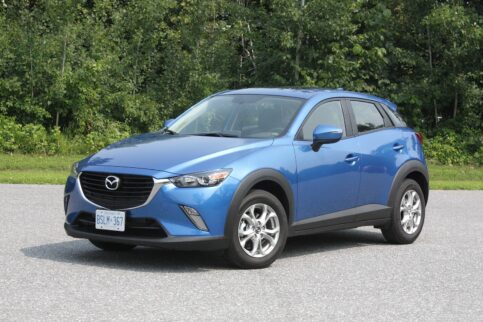 The market for subcompact crossovers and SUVs has grown quickly in the last couple of years because, quite frankly, some automakers aren’t giving budget-oriented buyers many other choices. Subcompact sedans and hatchbacks are on their way out and being replaced by crossovers aimed at the same shoppers, only with higher prices.

Small-SUV competition is so fierce that some automakers have multiple subcompact crossover models, the smallest of which are the least-expensive vehicles those brands offer.

In this article, we’ll look at how a few of these sub-subcompact utilities shape up as used vehicles and what to look for when shopping around.

These include a pair of near-twins from Buick and Chevrolet that were among the first of these super-small models; a Mazda that serves as the brand’s entry-level vehicle in Canada; and the Hyundai and Nissan vehicles that are the most honest about being hatchback replacements with their lack of AWD option.

Introduced in 2013, the Buick Encore was the upscale brand’s first small crossover. Built by General Motors’ South Korean subsidiary, the Encore is closely related to the Chevrolet Trax (which we discuss in more detail below) and the Chevrolet Sonic subcompact car.

Regardless of model year, all Encore models use a 1.4L turbocharged four-cylinder engine (138 hp/148 lb-ft of torque) and a six-speed automatic transmission; front-wheel drive was standard, and AWD optional.

A 2016 update brought the option of a stronger 1.4L turbo engine (153 hp/177 lb-ft), and in 2017 Buick updated the Encore’s styling. Be aware that the Encore is a distinct model from the Encore GX introduced in 2020, which is larger, uses different engines, and rides on different underpinnings.

Due to the two cars’ nearly identical mechanical makeup, many of the common issues that affect the Buick Encore also affect the Chevrolet Trax and vice versa. You’ll also see the Chevrolet Cruze mentioned in discussions about the Encore and Trax, as some versions of that car used the same 1.4L engine.

The Encore’s 1.4L engine is known for a positive crankcase ventilation (PCV) valve failure that can cause more serious problems if left unchecked. (https://buickforums.com/forums/threads/blow-out-protection-for-pcv-failure.50787/) Here’s more reading about poor performance that seems to be linked to the PCV valve issue (https://buickforums.com/forums/threads/hesitation-surge-check-engine-light-on-code-p0171.48056/), and here’s yet another PCV-related discussion.

A check engine light and a P0299 diagnostic trouble code point to an air leak in the engine’s turbocharged engine-intake system. (https://buickforums.com/forums/threads/check-engine-light-p0299-turbo-underboost.40398/)

The turbocharger in the Encore (and Chevrolet Trax) has coolant lines that help keep it from overheating, but are also a known source of coolant leaks. (https://buickforums.com/forums/threads/loosing-coolant-2015-encore.47414/)

Chevrolet got into the subcompact crossover market at the same time as Buick with the mechanically identical but lower-priced Trax.

All model years use a 1.4L turbocharged four-cylinder engine (138 hp/148 lb-ft). Early models came with either six-speed manual or automatic transmissions and front- or all-wheel drive. In later models, the automatic transmission was standard. In 2017, Chevrolet updated the Trax’s styling.

Here’s a discussion about the same P0299 turbo-related trouble code we discussed in the Buick Encore section. (https://cruzekits.com/tech-articles/f/p0299-underboost-code-explained)

If a Trax’s air conditioner intermittently blows hot air, the car could be covered by a General Motors service bulletin regarding an air conditioning system that has too much refrigerant (what used to be called freon) in it. This issue is more common in very high ambient temperatures. (https://static.nhtsa.gov/odi/tsbs/2016/MC-10081506-2280.pdf) Here’s some more reading on the matter. (https://www.traxforum.com/threads/2016-trax-air-conditioner-blows-hot-air.4297/)

If you hear a siren-like noise from the Trax’s engine, it could be caused by an accessory belt pulley with mis-cut grooves that don’t match the grooves in the rubber belt. (https://www.traxforum.com/threads/strange-siren-noise-from-engine-on-idle-low-revs.5098/)

If a Chevrolet Trax engine stumbles and misses, especially under acceleration, start by checking for a faulty ignition coil. (https://www.traxforum.com/threads/new-ignition-coil-at-31-000-miles.8001/)

In 2016, Mazda joined the subcompact crossover segment with the CX-3. Based on a Mazda2 hatchback design that was never sold in North America, the CX-3 has a snug interior that places it at the low end of the class in terms of cabin space. All CX-3 models use a 2.0L four-cylinder engine (146 hp/146 lb-ft).

At first, only a six-speed automatic transmission was available. In 2018, Mazda added a six-speed manual for entry-level front-wheel drive models and improved the CX-3’s sound deadening for a quieter ride. The 2019 model got refreshed styling inside and out.

When test-driving a Mazda CX-3, pay attention to how the automatic transmission shifts into gear from park or neutral. A few owners report an automatic that hesitates before engaging drive or reverse. (https://www.cx3forum.com/threads/auto-transmission-issues.7073/) Here’s another similar account. (https://www.cx3forum.com/threads/hesitation-in-d.6938/) While there are multiple complaints about this issue, it does not seem to be that common a problem.

The Hyundai Venue is the newest name in this comparison, introduced as a 2020 model. It’s powered by a 1.6L four-cylinder engine (121 hp/113 lb-ft); most trim levels include a continuously variable automatic transmission (CVT), but the entry-grade Essential model gets a six-speed manual. All Venue trims are front-wheel drive only.

The Venue’s limited time on the market means there isn’t much reliability data to discuss yet, but a handful of issues have come up in Hyundai discussion forums.

When you arrive for your Venue test drive, verify that the engine is not yet warmed up. After starting it up, listen for a rough idle. (https://www.hyundai-forums.com/threads/rough-idle-on-first-start-of-the-day.670602/)

If you’re an iPhone user, take some time to test the Venue’s wireless Apple CarPlay function. Some owners say their phones randomly disconnect and have to be reconnected manually. (https://www.venuedrivers.com/threads/wireless-apple-carplay-disconnect-reconnect-issue.191/)

Without any other specific issues to watch for, be attentive to any strange sounds or behaviours during your test drive. The CVT should shift smoothly as you accelerate from a stop and should respond promptly when you want to gain speed by letting the engine rev up. Listen for knocking/clunking sounds from the suspension when driving over rough roads. If the car has been sitting on a dealer’s lot for a few weeks, you may hear grinding or rubbing noises from the brakes at first, but this should go away after a few stops.

Nissan was not new to the subcompact crossover class in 2018, when the mainstream Kicks replaced the sport-oriented Juke as Nissan’s smallest utility vehicle.

The Kicks is a better fit for this class with its 1.6L engine (122 hp/114 lb-ft) and front-wheel-only drivetrain prioritizing fuel economy over performance. All Kicks models are standard with a continuously variable automatic transmission.

Some Kicks drivers complain that their cars stall out when they come to a stop. (https://www.nissankicksforum.com/threads/nissan-kicks-2018-stalling-problem.1001/)

Before you buy a used Kicks, have the electric system tested as part of a pre-purchase inspection; a couple of owners say they’ve experienced alternator failures, including this driver. (https://www.nissankicksforum.com/threads/2018-nissan-kicks-sr-issues.1241/)

During your test drive, take some time to operate the Kicks’ infotainment system to check for faults. Watch for slow touchscreen responses and any tendency for the display to freeze up. Also, try pairing your smartphone to the car’s Bluetooth system to see if you can make phone calls and stream music.