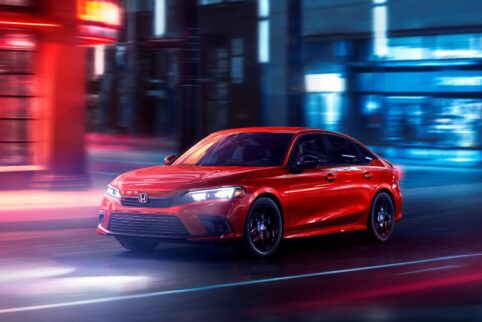 In 2016, the Insurance Institute for Highway Safety (IIHS) added a headlight component to its extensive battery of vehicle safety tests, marking the first time any North American organization had evaluated headlight performance in new vehicles.

This year, the IIHS combed through the five years of data it has compiled so far in its headlight testing program, and found that cars that earn the organization’s “good” headlight rating are involved in nearly 20 percent fewer nighttime crashes than those with a “poor” rating.

According to the IIHS, its latest safety study is the first to show how helpful a good set of headlights can be in improving a vehicle’s overall safety. They determined that good headlights reduce the chance of a driver getting hurt in a nighttime crash by almost 30 percent, and cut the rate of crashes involving pedestrians by about 23 percent.

Canada and the U.S. have regulations for vehicle headlights that dictate their brightness as well as how and where they project light on the roadway. Despite that, the IIHS said nighttime visibility varies widely from vehicle to vehicle, as does the amount of glare a car’s headlights generate for oncoming drivers. Click here to learn how the IIHS grades headlight performance.

We went through the IIHS’s list of 2021 and 2022 Top Safety Pick vehicles to find the ones whose standard headlights earned the organization’s “good” rating. There are many other vehicles with optional lighting systems that also get that top score, but we limited our list to the best base-model lights because we don’t think you should have to pay extra for good visibility.

We’ve based this list on vehicle specs for the Canadian market. Some cars come standard in the U.S. with top-rated headlights that are optional here and vice versa, which is why you’ll see some discrepancies if you compare this list with the IIHS website.

One noteworthy example is the Audi E-Tron electric SUV. In Canada, it comes standard with the company’s HD Matrix LED headlights, which the IIHS found are less effective than the base LED headlights in the U.S.-market E-tron. Another example is the Subaru Crosstrek, whose U.S. model gets top-rated standard LED headlights. They’re available in Canada as an option, but Canadian base models use halogen lights that the IIHS has not tested.

Speaking of LED headlights, all the top-rated cars here have them; you won’t find any halogens or HIDs on this list. Also, there are no pickup trucks whose base models have top-rated headlights, according to the IIHS.

In alphabetical order, here are the 2021 and 2022 model-year vehicles with the IIHS’s top-rated headlights.

The Acura TLX sport sedan and RDX and MDX crossovers all use the brand’s trademarked Jewel Eye LED headlights, which get the IIHS’s “good” rating for night lighting. Although Acura’s headlights aren’t the adaptive type that swivel with the car’s steering, IIHS says they provide good lighting around curves, with excellent high-beam visibility and low beams that produce little glare. One thing to note is the IIHS’s rating for the compact RDX crossover applies to the 2021 model; the 2022 version has tweaked styling, including a revised headlight design that the IIHS has not tested yet.

The Ford Bronco Sport is a new-for-2021 compact off-road SUV based on the Escape crossover. IIHS evaluators praised its headlights for good straight-line visibility in low- and high-beam modes and low glare.

Genesis’s G70 and GV70 compact sedan and crossover models and the full-size G90 sedan all earned the IIHS’s “good” rating for headlight performance. These vehicles’ standard LED headlights provided excellent visibility in straightaways and curves, despite not being equipped with an adaptive function. The IIHS’s only note is that the G70 sedan’s score applies to 2022 models; the 2021 version’s low beams generated too much glare to qualify for the top rating.

The all-new 2022 Honda Civic comes with standard LED headlights, which helped this compact sedan and hatchback score well in the IIHS’s lighting tests. The Civic’s lights give good visibility in all driving situations, but generate some glare for oncoming drivers.

Hyundai’s top-scoring standard-equipment headlights are found on the Palisade three-row SUV and the futuristic Nexo hydrogen fuel-cell crossover. The Palisade’s lights did especially well in the IIHS’s tests, with good visibility in curves and straightaways. However, evaluators noted some glare. On the other hand, the Nexo’s headlights never exceeded the test’s glare limits, but their visibility was less effective in curves.

Kia’s sporty Stinger fastback is among the few cars whose base headlights are better than optional lighting that promises better visibility. The entry-grade GT Limited model’s fixed LEDs cast more light further ahead of the car and actually provide better illumination around curves than the adaptive LEDs included in the car’s more expensive GT Elite trim. The only measurement in which the adaptive lights did better was in straight-line high beam illumination.

The Lexus IS is another car whose base headlights fared better in the IIHS’s tests than its optional lights, which Lexus calls its premium triple-beam package. The base LEDs provided better low-beam lighting in straightaways and distributed light more evenly in curves. The triple-beam lights only scored slightly better in straight-line high beam performance.

The NX compact SUV’s standard lights are just good enough for the IIHS’s “good” score, with so-so illumination in curves. Those optional triple-beam lights are better overall, but can’t quite match the base headlights’ high beam performance in straight-line driving. Note that the NX’s score applies to the 2021 model, which is being replaced with an all-new design for 2022 that the IIHS has not rated yet.

Two of Mazda’s SUV models earned “good” headlight ratings from the IIHS. The subcompact CX-30 provides good all-round lighting from its standard setup and an optional adaptive headlight system, with the latter performing especially well in curves. The IIHS noted some oncoming glare in all of the CX-30’s headlights; Mazda made some improvements to its adaptive headlights partway through the 2021 model year to address what the IIHS called “excessive glare” that prompted a “poor” rating.

The new-for-2022 Mitsubishi Outlander SUV is the brand’s only model to get the IIHS’s “good” headlight rating, with testers calling out the lights’ good all-round performance. They noted some glare in low-beam mode, but also said it was much better controlled than in the previous-generation Outlander, whose headlights scored “poor” for excessive glare.

You’ll find Nissan’s best headlights in a pair of the brand’s SUV models. The compact Rogue was redesigned for 2021 with headlights that performed best in straight-line driving. The Murano is one of Nissan’s older designs, but comes with lights whose high beams provide excellent visibility. The IIHS said both models’ headlights did very well at minimizing glare for oncoming drivers.

If you’re shopping Subaru’s lineup, you’ll find the best headlights in its Legacy and Outback mid-size models, Forester compact crossover, and Ascent three-row SUV. All of those models come with adaptive headlights, whose low beams the IIHS found performed better in right-hand curves than left. High-beam performance was more consistent in all four models. The Outback’s lights were the only ones whose glare never exceeded the IIHS’s limits.

Of Tesla’s four vehicle offerings, the Model 3 compact car is the only one the IIHS has run through its gauntlet of safety tests, but its headlights earned the organization’s “good” rating. Its high beams did better than the low beams, but overall visibility is good, and glare is well controlled.

Toyota’s best base headlights are found on its Sienna minivan, whose current design and all-hybrid lineup were new for 2021. The Sienna’s standard lights only perform fairly well in curves, but were strong enough for a “good” rating in conjunction with strong straight-line lighting. An optional headlight upgrade brings better low-beam performance with similar high-beam visibility, and less glare for oncoming traffic.

In Canada, the Volkswagen Arteon upscale sedan comes with adaptive headlights that provide excellent low-beam visibility, fair-to-good high beam performance, and little glare, all of which combined to earn it the IIHS’s “good” overall rating. American VW shoppers have to pay extra for this headlight system; the base headlights in U.S.-spec Arteons get a “poor” rating for visibility the IIHS said is “inadequate” in most situations.

Three models from the Swedish safety obsessives at Volvo make the IIHS’s list of vehicles with the best headlights. Two are the closely related compact S60 and V60 sedan and wagon, and the third is the XC40 subcompact crossover. The XC40 provides better low- and high-beam performance in most situations, but the S60 and V60 make back some of their visibility deficit by generating less glare than the XC40.