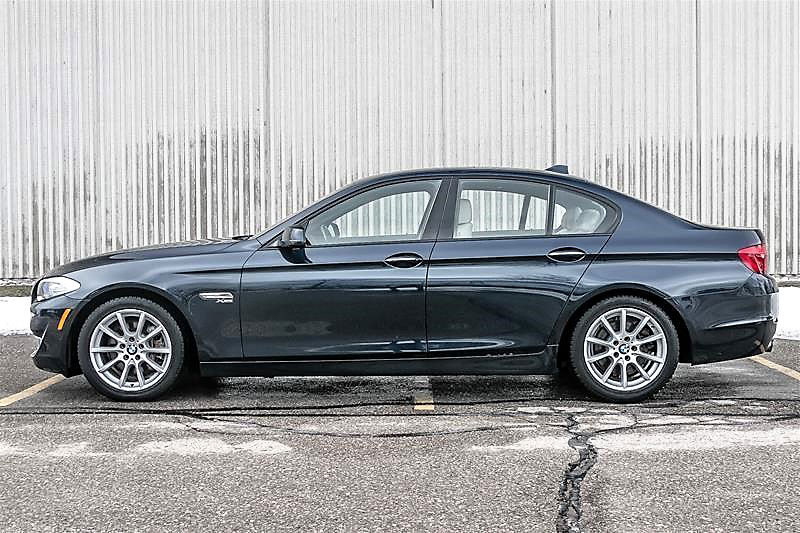 Germany’s car industry has a lot of experience building luxury sedans like the Audi A6, BMW 5 Series and Mercedes-Benz E-Class. They are arguably the most recognizable and desirable cars in the mid-size upscale sedan category.

Luxury cars can be surprisingly affordable to buy used, for reasons we explained in a previous blog post about luxury car deprication. However, there’s no need to be afraid of owning one of these upscale sedans, as long as you know what to expect.

To help you, we’ve created a guide to what to look for in a used Audi A6, BMW 5 Series or Mercedes-Benz E-Class. For this article, we’re sticking to the most common versions. We will not be examining the high-performance variants like the Audi S6, BMW M5 or Mercedes-Benz AMG sedans.

When shopping for a luxury German sedan it is wise to keep a simple rule in mind. The more expensive a German car was to buy new, the more work it will be to keep a used one on the road. The 5 Series lives up to that reputation: the 550i’s powerful V8 engine is known for a number of common reliability issues.

In 2015, BMW began a service campaign to replace many parts beginning with the 2011 550i models, like fuel injectors and the timing chain. BMW also shortened its maintenance intervals for the engine, suggesting that more maintenance is better than less for this engine’s longevity.

Ask the seller if their used 550i was part of that service campaign, and did they have it completed. If the car you’re test-driving shows a check engine light or drivetrain malfunction warning, these could indicate a need for expensive repairs.

If you want some performance and reliability in a 5 Series from this era, the 535i with its turbocharged six-cylinder is a better bet.

This generation of 5 Series was also the last to use one of BMW’s non-turbocharged six-cylinder engines. BMW only offered it in the 2011 model, but if you want simplicity, that old six-cylinder is the way to go. BMW’s newer turbo four- and six-cylinder engines are good performers, but they are more complicated and sensitive to poor maintenance.

A common complaint with the 5 Series sedan is a battery that goes dead overnight. This car has many electronic systems, some of which draw electricity even when the car is off. A weak battery may have enough power to start the car, but can still cause strange behaviour and ominous warning lights and messages. In some cases, a software update can fix such a problem. Also, if you have to leave the car parked for an extended period, connect a trickle charger to the battery.

This generation of A6 has an auto-stop function that shuts the engine off at stoplights under certain conditions. Some owners complain that the engine turns off before the car stops, which is apparently normal. But systems like the power steering and wipers should function even when the engine is off, so if they don’t, there’s a problem. Also, the engine should start up again right away when you lift your foot off the brake pedal.

The A6 sedan 3.0T model’s V6 seems to be the better choice for long-term reliability. The 2.0T model’s turbo four-cylinder has a reputation for carbon build-up on its intake valves. This can affect engine performance and requires periodic cleaning.

The A6 also has a history of engine timing-chain components that wear prematurely. Like the chain on a bicycle, when the timing chain and the sprockets it runs on wear out, the chain can skip teeth. That throws the valve timing off, and can destroy the engine. Replacing the timing-chain system is expensive; not replacing it (even as a preventative measure) can end up costing a lot more.

Regardless of which gasoline engine you choose, check the car’s maintenance records to see when the spark plugs were last replaced. If there is no evidence of spark plug replacement, make that a priority once you own the car.

Audi also offered this generation of A6 with a TDI diesel engine. This model was one of the cars caught up in the Volkswagen emissions scandal a few years ago. If you can find a well-maintained used example, it will provide strong performance and good fuel economy. However, it is not as environmentally friendly as Audi wanted you to believe when these cars were new.

Among the E-Class’s most common options was a panoramic sunroof. Many owners complain of creaking, rattling, or popping noises from the roof while the car is driving. This happens particularly on rough roads or when entering a steep driveway. Some owners say their dealer fixed a loose part in the sunroof assembly. Some think the cause is the sunroof shifting when the car body flexes over uneven surfaces.

The E-Class has a secondary battery that helps power the car’s electronic accessories. An auxiliary battery malfunction warning means that the battery needs to be replaced; it’s located behind the dashboard, under the instrument cluster.

Other common complaints include rough shifting from the E-Class’s automatic transmission, which Mercedes usually fixes with a software update. Otherwise, the E-Class appears to have few serious reliability or durability problems.

What to Check Before You Buy

No matter which of these cars you buy, try out all of the car’s electronic features when test driving, including infotainment systems. Common options include head-up displays and exterior cameras that provide a 360-degree view around the car. Luxury cars like these were also among the first to offer features like collision warning with automatic braking and radar cruise control. It’s hard to test these safely, but any faults should turn on a warning light or message in the dash.

We cannot stress enough how important it is to have a mechanic look at one of these cars before you buy it. Take the car to a dealership service department or an independent shop that specializes in German cars to get their opinion on the car’s condition. You will have to pay for this inspection, but it’s worth it to avoid a poorly maintained car.

Finally, consider buying your used A6, 5 Series, or E-Class through the manufacturer’s certified pre-owned program. Purchasing these cars through the new vehicle cost a bit more than average, but they include extra warranty coverage. You may also want to consider purchasing a third-party extended warranty as protection against expensive future repairs.