Car Reviews and Tips » Cars that Pretend to be Crossovers 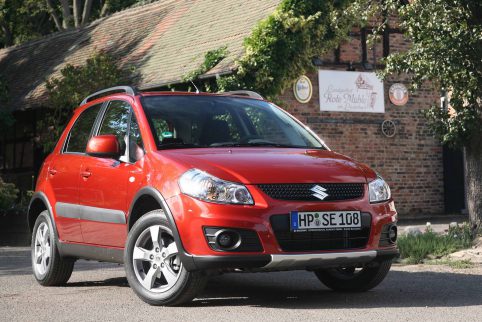 By the mid-2000s, the crossover utility vehicle craze was well underway. Models like the Ford Escape, Honda CR-V and Toyota RAV4 were selling in big numbers to buyers who wanted a car-like driving feel in a rugged-looking vehicle with AWD traction.

Those three models helped shape today’s crossover-centric marketplace. Fifteen years ago, however, the crossover vehicle concept was still a fluid one, and automakers were experimenting with how SUV design cues could attract buyers to existing vehicle segments. In this article, we’ll take a look at three of those experiments, which met with varying levels of success.

The generically named SX4 replaced the Aerio as Suzuki’s entry-level model. The combination of the hatchback variant’s high roof and tall suspension gave the impression of a tiny utility vehicle, which Suzuki backed up with an AWD option. (There was an SX4 sedan, too, but it only came with front-wheel drive.)

All model years used a 2.0L engine and a choice of automatic or manual transmissions with AWD. The SX4 gained a bit more power in 2010.

A sound like that captured here and here (https://youtu.be/0smMzPX3Lqc and https://youtu.be/VSOaQtnYek0) could signal a failing connecting rod/crankshaft bearing (sometimes called a “spun” bearing). (https://clubsx4.com/forum/showthread.php?t=78 ) It appears the actual rate of failure is quite small, but it will effectively wreck the engine and is expensive to repair, making it worth watching for when shopping for a used SX4.

The SX4’s AWD system has a low-speed mode that locks the front and rear axles together at the push of a button. If the dash displays “i-AWD” and “full lock” lights on the dash when the lock feature is on, the cause is probably a bad wiring connection. (https://clubsx4.com/forum/showthread.php?t=5995 )

Suzuki issued a 2010 recall to repair outside mirrors that could come loose and fall off the car. The fix is an easy one, but if you get one with a loose mirror, it’s worth a trip to a dealer. That is, if you can find one: Suzuki has been out of business in Canada since 2013.

Hard starting, or longer-than-normal cranking before the engine starts, was addressed in a Suzuki TSB, which can be found in this ClubSX4.com discussion. (https://clubsx4.com/forum/archive/index.php/t-747.html ) Here’s another related discussion. (https://www.suzuki-forums.com/suzuki-sx4-forum/27285-any-canadian-get-hard-start-issue.html )

Other common complaints include failed wheel bearings and air conditioning compressor clutches, manual transmissions that are difficult to shift from first to second gears and can pop out of gear at highway speeds, and rough shifting in 2007 through 2009 models with the optional four-speed automatic transmission. Also, many owners complained about the oil filter’s location, which, when removed, allowed oil to be spilled directly onto the oxygen sensor, which could contaminate the sensor.

Here’s a compilation of all kinds of problems, large and small, that SX4 owners have dealt with. (https://clubsx4.com/forum/showthread.php?t=79 ) 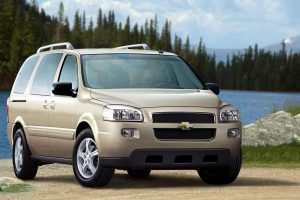 The Chevrolet Uplander and Pontiac Montana SV6 were the two most popular versions of General Motors’ final minivan design; Saturn sold a van called the Relay, and Buick offered the upscale Terraza, but neither sold in large numbers.

When GM launched these vans, its marketing materials called out blocky styling meant to evoke the look of an SUV or crossover. The company backed up the utility vehicle message by offering AWD as an option in early models. Base models used a 3.5L V6 and a more potent 3.9L was an option, but only the smaller engine was offered in combination with AWD.

When shopping for a used Uplander or Montana, pay special attention to the climate control system. Chevrolet and Pontiac discussion forums are full of complaints about air conditioning systems blowing hot and heaters pumping out cold air.

Take note of the braking performance, too. Vibrations from the pedal could indicate warped brake rotors. Fixing this is as easy as replacing the rotors; that’s not expensive, but a reputable seller will either cut you a deal or do the fix before you take the van home.

Other than those specific issues, make sure the transmission shifts smoothly and that the suspension absorbs bumps with no untoward noises. A pre-purchase inspection is wise to suss out hidden problems with electronic systems with a diagnostic scan. 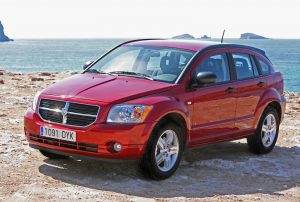 Dodge introduced the Caliber compact car in 2007. This chunky hatchback was a big change from the Neon/SX 2.0 that preceded it, and it also stood out in a class of economy cars with smoother styling. Early models came with a choice of 1.8L, 2.0L and 2.4L four-cylinder engines. All-wheel drive was an option with the largest of the three in early years, but was discontinued in 2009. In 2008 and 2009, Dodge also made a high-performance SRT4 variant.

Here’s a discussion about noisy continuously variable transmissions (CVT). (https://www.jeeppatriot.com/forum/showthread.php?t=16231&highlight=axle ) The interesting thing here is that the Caliber uses a CVT built by Nissan (through its JATCO subsidiary), which that company also uses in its own cars (specifically, this one is shared with the Sentra compact sedan). Nissan extended warranty coverage for the CVTs in its cars to 10 years/200,000 km to address reliability concerns, partly caused by the same noise described in that Jeep discussion.

A handful of Caliber owners on this forum have complained that their cars take a long time to reach normal operating temperature. (https://www.caliberforumz.com/showthread.php/1380-Operating-Temp-Heat-HELP/page2 )

A manual transmission that grinds going into third gear, or refuses to stay in gear, is addressed in this service bulletin. (https://docs.google.com/file/d/0B818hrBYPkZBZU43LTZ2b05veDg/edit?usp=sharing)

The Caliber (and its Jeep Patriot and Compass platform-mates) are notorious for poor interior quality, at least prior to a 2010 refresh. Watch out, too, for brakes that wear quickly — an accusation we could level at many modern cars.