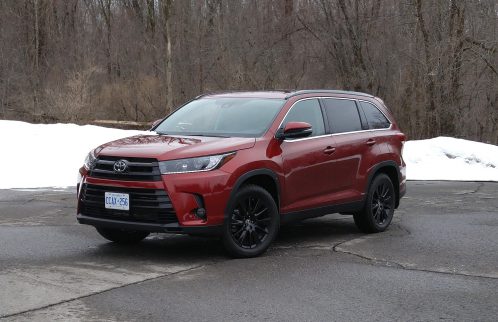 Toyota’s fourth-generation Highlander crossover arrives in January 2020, following its 2019 debut at the New York auto show. Therefore, by the time you read this review of the third-generation Highlander — a 2019 model — it’ll officially be last year’s car. However, Toyota’s tendency toward incremental changes to existing models acknowledges its loyal buyers — drivers who keep coming back for the brand’s reliability rather than the latest designs.

Therefore, the third-gen Highlander is unchanged for its last year on the market, following a 2014 redesign and a 2017 update. My test vehicle came dressed in SE trim, an option on the XLE model that gets a sport treatment for its grille, red stitching on its black leather seats, ambient interior lighting, LED fog lights, second-row captain’s chairs, and black 19-inch wheels. 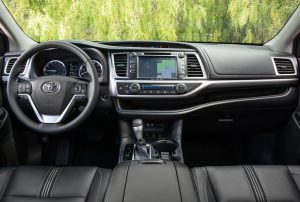 All Highlander trims are standard with three rows of seating. The third row is not especially roomy, so only kids and small adults will be comfortable back there for rides of any significant length.

The second row is a lot better, with spacious head- and legroom. Getting in and out is easy, too, thanks to wide door openings. The second-row seats also fold and slide forward to allow easy access to the third row.

My SE test vehicle had second-row captains chairs, which turns the Highlander into a seven-seater; the standard three-place bench allows eight people to ride. 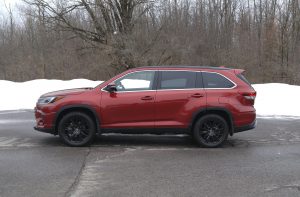 Highlander XLE’s dash is built around an 8.0-inch touchscreen that houses controls for navigation and a six-speaker stereo. The display looks good, and the navigation system has voice recognition that lets you speak a full address to help you find where you’re going. However, the infotainment system shows its age in its lack of Android Auto and Apple CarPlay smartphone integration. Interestingly, Toyota also doesn’t offer a rear-seat DVD player, an upscale option available in most of the Highlander’s competitors.

If you’ve never had nor used those features before, you might not miss them. But I’m pretty certain you’ll have used better-designed controls than the Highlander’s volume, tuning and temperature dials. These don’t protrude far enough from the dash to provide an easy grip, especially when you’re wearing gloves.

Toyota did a better job on the Highlander’s small-item storage spaces. There’s a useful shelf that starts by the driver’s right knee and runs to the passenger side door; it’s perfect for stashing anything that fits in your pockets, including smartphones. Under the climate controls, there’s a cutout for running a charging cable down to the USB ports ahead of the shift lever.

The Highlander’s other handy touch is a rear window that opens separately from the tailgate. It’s a nice way to load little things in the trunk; it also lets the Highlander hold items longer than its cabin (think 2x4s and other building materials) with the tailgate shut.

XLE-trimmed Highlander models get a three-zone climate system that places rear-seat controls on the centre console.

All Toyota Highlander trims use the company’s 3.5L V6 engine. It’s smooth and strong, but it has a lot of work to do in this heavy crossover. An eight-speed transmission introduced in 2017 makes better use of the Highlander’s power than the previous six-speed. Still, the Highlander’s acceleration is most impressive once you’re already moving; a lack of low-end grunt makes this utility feel weak from a standing start.

Ride comfort is good, but drivers looking for a vehicle that approaches entertaining will be disappointed. The Highlander’s strength is the smooth, effortless way it handles highway driving.

My Highlander test vehicle’s average fuel consumption was 12.0 L/100 km in a week of wintry city driving. That measures up well against Toyota estimates of 12.1/9.0 L/100 km (city/highway). 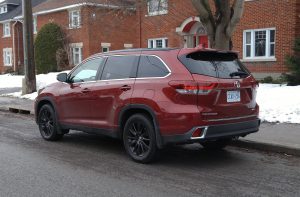 It’s a big jump to $45,795 for the XLE trim, though that does include a number of items offered as options in LE. The XLE package’s notable additions are passive keyless entry with push-button starting, rear door sunshades, a power tailgate, leather seating, power front seats, blind spot monitoring with cross traffic alert, and the rear-seat climate controls.

If you’re looking for ventilated front seats and heated second-row chairs, those are found in the Limited package. And if you want a heated steering wheel, you won’t find it here; Toyota doesn’t offer one in the Highlander.

Buyers who plan to use third-row seating frequently will find more space in almost any of the Highlander’s competitors, most of which are newer designs. This Toyota mid-sizer is most impressive as a four- or five-seater with a lot of cargo space.

If you’re not worried about owning the latest and/or greatest in the mid-size crossover class, the Highlander is a solid choice. Along with Toyota’s excellent record for reliability, the Highlander also routinely retains value better than most of its mid-range crossover competition.

You could wait until 2020 for the all-new fourth-gen Highlander, but this outgoing model’s flaws are hardly deal killers. If basic practicality is your top priority, the 2019 Highlander is an excellent vehicle that’s worthy of your test drive time.