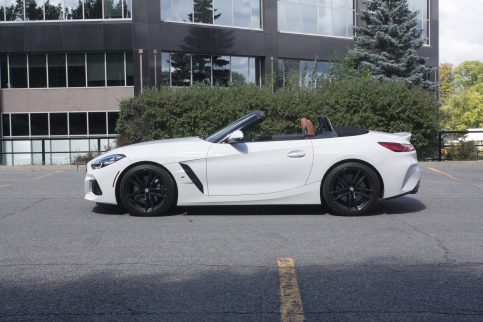 BMW launched its latest Z4 as a 2019 model and the fourth generation of the brand’s mainstream roadsters that began with the Z3 of 1995.

The Z4’s arrival was highly anticipated, partly because its underpinnings were also the basis for an all-new Toyota Supra — but that’s a story for another day.

Like its predecessor, the new Z4 comes with a choice of turbocharged four- or six-cylinder engines. It adopts BMW’s latest naming scheme, where four-cylinder cars are labeled 30i and six-cylinder models are called M40i.

Some argue that BMW’s more widespread use of the M label waters down the brand’s performance heritage and makes sports cars like the M3 and M5 feel less special. In the Z4 M40i’s case, the M badge is a hint that this roadster is about more than letting the wind mess up your hair.

The Z4 M40i boasts 382 hp from its turbo six-cylinder and enough torque to generate breathtaking full-throttle acceleration. In sport mode, it’s accompanied by a sweet snarl from the exhaust that made me want to slow down just so I could accelerate again.

That soundtrack is the real deal. A damper in the muffler opens in sport mode and shuts in the comfort and eco settings for quieter driving. With that damper open, the muffler also makes fun snap, crackle and pop noises during deceleration that made me enjoy red lights a lot more than usual.

Handling and cornering grip are impressive. Sport mode tightens up the suspension and makes the ride too harsh for city streets, so I used the car’s individual setting to tailor the car’s performance to my preference. My setup was the softer suspension for better ride comfort, the more relaxed transmission shift program, and sport mode’s quicker throttle response.

In eco and comfort modes, the eight-speed transmission is busy, shifting up through its gears to maximize fuel economy. The sport and sport-plus drive modes create a more natural feel, letting the engine rev more and lending the car a livelier feel.

Despite the Z4’s compact size, my six-foot-five brother-in-law had plenty of headroom and enough space to extend his legs.

However, despite his slim build, the aggressively bolstered seat dug into his lower back. He wasn’t the only passenger who complained about that, but I had no trouble getting comfortable. Those seats are standard in the M40i, but the butterscotch-coloured leather is an option.

Cargo space in the nicely finished squared-off trunk is impressive for a roadster, and there’s a pass-through to the cabin for long items.

Visibility to the rear is pretty bad with the top up, so rain and/or night driving is challenging. My test car had blind-spot monitoring and the mandatory backup camera, but a 360-degree camera setup would be useful.

The Z4’s convertible top is power operated and fully automatic, and opens or closes in about 10 seconds.

The Z4 has BMW’s latest digital gauge cluster, which looks good but is fussy. The analog-look speedometer is hard to read at a glance and is also redundant, as it frames a digital speed readout. My test car had an optional head-up display that also shows the car’s speed.

Infotainment functions are handled by BMW’s iDrive, whose console-mounted dial and buttons and large dash screen are easy to navigate.

As a driver who frequently adjusts a car’s air conditioning system manually, I found the fan speed and temperature toggles small and challenging to use at a glance. A row of touch-sensitive radio preset buttons below those are more helpful, showing which frequency they’re set to without having to press them.

Primary competition comes from the Porsche Boxster and Boxster S, Audi TT, Jaguar F-Type, and Mercedes-Benz SLC-Class. The Chevrolet Corvette is in the same price range, but is a totally different beast with its big-displacement V8.

I expected the new BMW Z4 M40i to be a speedy, nicely finished roadster, and it delivered in that regard. What surprised me was how much silly fun this car is: Its youthful feel put me in mind of a Mazda MX-5 with a whole lot more power. These days, it’s rare that a German luxury car doesn’t take itself too seriously, and the Z4 is better for it.