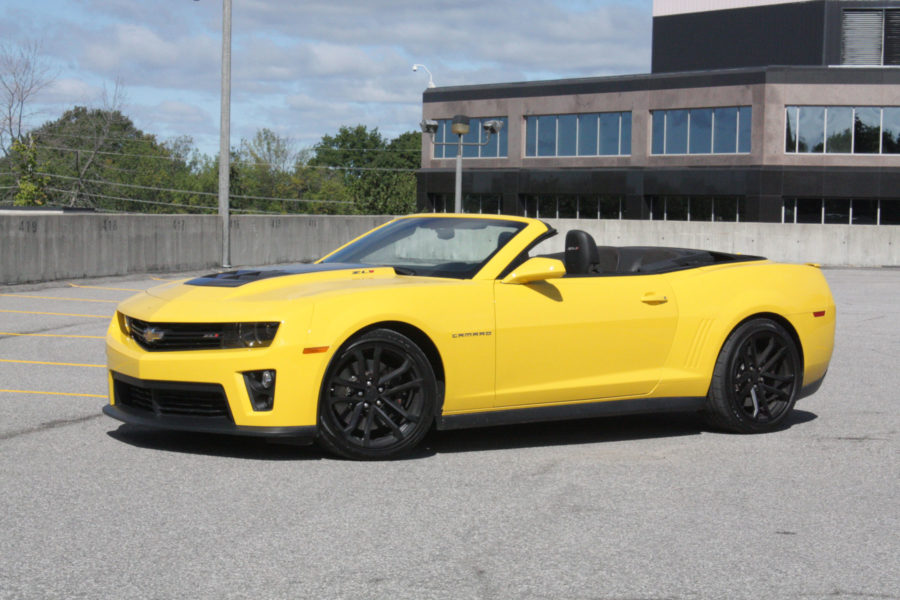 Forget Christmas: Spring is the most wonderful time of the year when we relish the opportunity to drive with the windows — or, even better, the top — down. We thought we’d celebrate April’s milder weather and longer days by looking at a selection of used convertibles.

Cars with folding tops make up just a small slice of the marketplace. Still, there is enough selection to make it hard to cover the full segment in one article. Therefore, this month’s piece focuses on a quartet of well-known models. These cars are all quite different: one is a modest four-cylinder, while two offer powerful V8s; two are roadsters and the others seat four. All of these cars do share a few common traits: they’re fun rear-wheel drive models that are affordable to buy used.

Chevrolet revived the Camaro coupe in 2010 following a long hiatus, and a convertible version arrived in 2011.

Naturally, the V8 engines are the performance champs of the Camaro range. They’re also more reliable than the V6. That entry-level engine is known for problems with worn timing chains and oil consumption. The direct fuel-injection system promotes power and economy, but it also allows gunk to build up on the intake valves, which can affect performance and is expensive to remedy.

When test-driving, check that the key releases from the ignition after you turn the car off. This is probably due to a fault in the automatic transmission’s shift interlock system. It’s designed to prevent the key from being removed when the shifter is not in park and the car could roll away.

After shutting the car off, wait a couple of minutes and then restart it. Some owners say their Camaro engines hesitate or stall when restarted hot, but no one seems to know why.

Other worthwhile checks include the air conditioning and touchscreen systems. If the infotainment screen responds slowly or crashes, the car might need a software update (cheap) or new hardware (expensive). If the A/C doesn’t blow the temperature of air you command from the vents you select, you have to remove the dash to replace faulty parts.

The Ford Mustang adopted retro styling in 2005, and subsequent generations have evolved that look.

Older V6 cars have a plastic engine-thermostat housing that can crack and leak coolant. Hesitation on acceleration at highway speeds in V6 and V8 cars is caused by air bubbles forming around the fuel pump. In the same early cars, water can get into the parking-brake cable assembly and freeze, which prevents the parking brake from releasing.

Some owners of later Mustang models with SYNC infotainment complain the system often crashes. In some cases, the only permanent fix is to replace the hardware behind the touchscreen.

If you test-drive a newer 5.0L car with the manual transmission, make sure the shifter behaves. A gearbox that pops out of gear or grinds when you shift may have been abused.

Nissan has been building its Z sports car for nearly 50 years. The original was called the 240Z; the name has changed over the years to reflect larger, more powerful engines. The latest version is the 370Z, introduced in 2009; Nissan added a convertible version in 2010.

Owners have few complaints about the 370Z’s durability. Convertible models are less likely to have seen winter driving than the coupe variant, but be on the lookout for rust. Check the bottoms of the doors, taking a peek behind the weather stripping. While you’re crawling around, inspect the rocker panels (that’s the part of the body below the doors) and try to get a look at the underbody. Look for paint damage, too, especially on the front of the body.

Manual transmission models with an optional sport package are designed to automatically rev the engine as you shift to a lower gear. Check whether it works properly. You can disable this feature if you don’t like it; you might appreciate the sport package’s bigger brakes and wheels more.

If you notice the manual transmission is difficult to shift, it could be due to a lack of lubrication in the linkage between the shifter and transmission. It may also indicate a clutch pedal that needs an adjustment.

Some owners have had to replace suspension shock absorbers prematurely. This was a common Mazda flaw in the mid-2000s.

If the engine takes a long time to warm up (which can be hard to detect in warm weather) the thermostat has probably failed. This simple device is designed to stay open when it fails; if it failed in the closed position, the engine would overheat.

Check the trunk for dampness. The Miata has a “rain rail” designed to guide water to a space between the convertible roof and the car’s body, where there are drain holes. If that rail is cracked, water can get into the trunk. Drain holes blocked with leaves and other debris can also cause water leaks.

What else should you watch for in a used convertible?