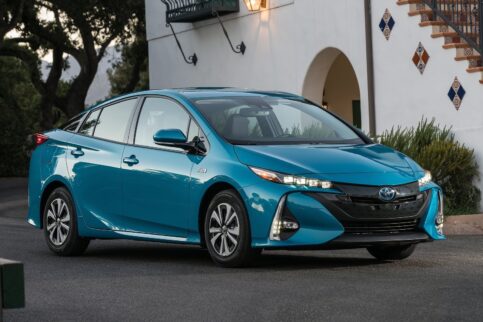 The world’s automakers are putting a lot of money and engineering into electric vehicle (EV) technology, and if those efforts pay off, hundreds of new EVs will go on sale by the end of this decade.

So if you’re thinking of buying an EV, you’ll have a lot more of them to choose from in the near future. The question is whether or not public infrastructure will have caught up by then to make it easier to charge when you’re away from home.

Until then, your best option for an all-around electric car might be a plug-in hybrid, or PHEV. These vehicles combine plug-in charging for a limited amount of electric driving and a gas engine that is quick and easy to refuel on longer road trips.

Aside from being a good introduction to the EV lifestyle, a used PHEV could be a useful stopgap option while you wait for EV battery and charging technology to provide the electric driving range you’re hoping for.

For our first look at the used PHEV marketplace, we’re focusing on a trio of fastback models. Of these, the most familiar name is the Toyota Prius Prime, a plug-in version of the brand’s popular hybrid car. We’ll also tell you what to watch for when shopping for used versions of the Chevrolet Volt and Hyundai Ioniq Electric Plus.

The 2016 Chevrolet Volt was the second generation of the brand’s game-changing plug-in hybrid (PHEV) compact car. It combines more conventional styling with a larger battery that promises 85 km of electric range, nearly a third more than the first-gen Volt.

At the time, Chevrolet described the Volt as an electric car with a gas engine that acted as a range extender, but we see it as a PHEV, since that gas engine provides most of the car’s total driving range by powering an on-board generator. Either way, power output is 149 km and 294 lb-ft of torque. Chevrolet discontinued the Volt after 2019 so that its GM parent company could devote more resources to its all-electric vehicles, like the similarly named Bolt.

If you hear a clicking, clanking or banging noise from the back of your Volt when the gas engine starts, the source is likely a backfire from the exhaust. You can hear the sound in this video. Read more here.

A ”shift to park” error can apparently indicate any one of a variety of different faults and fixes. Among these is a battery control computer that needs to be replaced (expensive) or a required adjustment to the shift lever mechanism (less expensive). If you trace the problem to the shift mechanism, this video explains how to fix it yourself.

Some Volt owners say they feel a surging sensation at certain speeds when the gas engine is running, which is known as the “chuggle.” There is apparently a software update that fixes this issue.

When test-driving a Volt, listen for a rattling noise coming from the rear of the car, which is a common complaint among owners.

The Hyundai Ioniq Electric Plus (renamed Ioniq Plug-in Hybrid for 2021) is a PHEV version of a car Hyundai also sells as a pure EV and a conventional non-plug-in hybrid. Hyundai says the Ioniq Electric Plus can go up to 47 km on a full charge, and its electric motor teams up with a 1.6L gas engine for 164 hp and 195 lb-ft of torque in hybrid mode.

During your test drive, try the air conditioning system. In hot weather, it should (obviously) blow cold air almost right away. You can test it in wintertime by setting the system to defrost mode, which uses the A/C as a dehumidifier. Some owners have had leaky A/C evaporators replaced; this is the radiator-like part that gets cold and chills the air before it comes out of the vents. If the evaporator leaks, the A/C system’s refrigerant will escape and cause poor performance or no cooling at all.

Some Ioniq owners say that if you don’t latch the tailgate properly, it won’t open again until you close it fully.

In this thread, Ioniq drivers discuss a rattling sound from the rear of the car, very similar to the Volt’s noise complaint.

Hyundai has issued a few recalls for the Ioniq. Three of them are related to issues that could cause a fire, and apply to 2017, 2018 and 2020 models. Check whether the car you’re looking at has any outstanding recalls by entering its VIN at this page on the Hyundai Canada website.

In 2013, the Toyota Prius Plug-in Hybrid was the company’s first plug-in car for the Canadian market, offering a modest 18 km of electric range on a full charge. Toyota improved on that with the 2017 Prius Prime, which promises 40 km of EV range and is still available as a 2021 model.

During your test drive, run the Prius Prime through a high-pressure car wash and watch for water leaks from the hatchback.

Listen for annoying noises coming from the rear of the car as you drive. There are several complaints of squeaking sounds, especially when driving into a steep driveway or parking lot.

If a Prius Prime’s A/C doesn’t blow cold air from the centre vent on the passenger side, check that the air conditioner’s “eco” setting is turned off; it’s designed to focus cooling air on the driver when there’s no one else in the car.

There are many complaints of dead 12-volt batteries in the Prius Prime. While a hybrid (plug-in or not) has a large battery to help drive the car, it also uses a regular battery to turn the car, on just as a gasoline vehicle uses it to start the engine. A weak 12-volt battery can cause problems with various vehicle systems even if it still has enough juice to turn the car on.