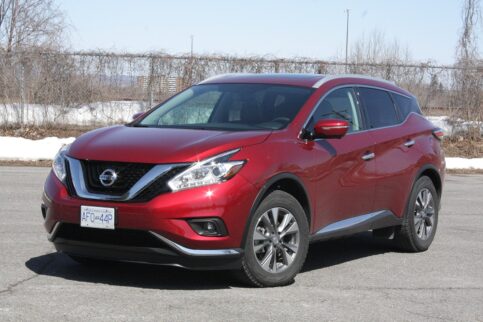 Mid-size mainstream crossover SUVs are not sexy, but they’re desirable all the same. For some family drivers, they’re a “just right” option, filling a narrow niche between compact crossovers and larger mid-size models with three rows of seating.

If you’re in the market for a used mid-size crossover with five seats, read on for what to look for in a few of the market’s most popular models.

Ford redesigned the Edge in 2015 and refreshed it again in 2019, so this information will also apply to used 2020 models.

In 2015, Ford offered the Edge with 3.5L V6 and 2.0L turbo four-cylinder engines in SE, SEL and Titanium trims, with front- or all-wheel drive. A 2.7L turbo V6 powered the Edge Sport with standard AWD. The 2019 update eliminated the 3.5L V6, and the Edge ST replaced the Sport trim and kept the 2.7L turbo engine. That year, Ford also installed a new eight-speed transmission in place of a six-speed.

In older models with the six-speed, watch for rough shifting. If you’re looking at a car with AWD, have the transmission’s transfer case (a set of gears that powers the driveshaft to the rear axle) checked for oil leaks.

Some 2015 and 2016 models generated complaints about overly sensitive brakes that prompted Ford to redesign the power brake booster.

If you’re keen on the Edge Sport or newer ST and its powerful turbo V6, watch for oil pan leaks, a common reliability complaint.

In 2015, Subaru launched the fifth generation of its Outback crossover. It came with more attractive styling but a similar range of mechanical options. Base cars had a 2.5L four-cylinder engine with a choice of six-speed manual transmission or continuously variable automatic (CVT). The optional engine was a 3.6L six-cylinder with a CVT. All-wheel drive is standard across the board.

Some Outback owners complain of excessive oil consumption. There are also a few reports of faulty cylinder head gaskets, a well-known issue in older Subaru engines. When you have a mechanic do a pre-purchase inspection, ask them to inspect the gaskets (all Subaru engines have two cylinder heads and, hence, two head gaskets) for signs of leaks or impending failure.

When test-driving, spend some time (with the car parked) using the touchscreen infotainment system. Many owners say this system is buggy and regularly locks up until the car is turned off and restarted.

Like most modern cars, the Outback is loaded with electronics, which put a lot of strain on the battery. Symptoms of a weak battery range from weird electronic glitches to a car that won’t start.

Finally, ask the seller if they have service records for the car. This is especially important for the CVT’s scheduled fluid changes, as Subaru requires the use of a specific type of lubricant. Putting any other transmission fluid in the CVT can cause reliability trouble and void the warranty.

Introduced in 2009, the first-generation Venza was offered with a 2.7L four-cylinder and a 3.5L V6, both of which came with a six-speed automatic transmission. All-wheel-drive was optional.

When driving, listen for clicking or whining sounds from the steering when you turn the wheel. These noises could point to a steering column that needs lubrication or replacement with a new part. Even if you don’t hear anything that indicates steering issues, ask your mechanic to take a look during a pre-purchase inspection to help avoid an expensive steering repair down the road.

If the Venza you’re looking at has a panoramic sunroof, listen for creaking noises while driving. Lubricating the sunroof seals or other components can fix this.

Some owners feel the Venza’s brake components wear out more quickly than they should.

Finally, a Venza that won’t shift out of park and shows brake and stability control warning lights may have a faulty brake light switch. This is an inexpensive fix, but an important one, as a bad switch means the brake lights won’t work.

Hyundai redesigned its popular Santa Fe in 2013. Among its notable features was an optional 2.0L turbo four-cylinder engine; the base powerplant was a 2.4L four-cylinder. Both came with a six-speed automatic transmission. Front-wheel drive was common with the 2.4L engine, but most 2.0L versions came with standard AWD.

In 2014, Hyundai renamed this vehicle the Santa Fe Sport to set it apart from the larger, seven-seat XL model, which is structurally similar but uses a V6 engine. The information you’ll read here focuses on the five-seat Santa Fe.

Both Santa Fe engines use direct fuel injection, which boosts power and economy. However, it can cause trouble as the vehicle ages, allowing carbon deposits to build up on the engine’s intake valves. This needs to be cleaned off periodically to ensure consistent performance and reliability, so ask the seller for proof that the car was maintained according to Hyundai’s schedule.

A frequent cause of rough transmission shifting, especially before the car warms up, is a faulty oil temperature sensor. According to owners who have experienced this fault, you will notice it when it happens.

If the Santa Fe you’re looking at has advanced safety features like blind spot monitoring and forward collision alert, watch for related warning lights during your test drive. Any trouble with these systems will require a visit to the dealer.

The 2011 model year saw the introduction of Kia’s second-generation Sorento, which had a lot in common with the version of the Hyundai Santa Fe sold until 2012.

Engine choices were a 2.4L four-cylinder and a 3.5L V6, which both came with a six-speed automatic transmission. Front-wheel drive was standard and all-wheel drive the option. In 2014, Kia replaced the 3.5L engine with a 3.3L; both it and a revised 2.4L four-cylinder were more powerful than those in the 2013 model. The Sorento is the only vehicle here commonly fitted with a third-row seat, but it was an option.

When test-driving a used Sorento, find a safe place to make a number of tight turns while listening for rumbling sounds and a sensation of tires alternating between slipping and gripping. This could indicate a failed or failing centre differential, which is supposed to allow the front and rear wheels to turn at different speeds.

Test the Sorento’s power locks, both with the remote key fob and the central locking button inside the car.

Some Sorento owners complain of excessive engine oil consumption. We’d suggest checking the oil level either before or after your test drive.

If the Sorento you test has push-button start, turn the engine off and on several times during your drive. If it fails to start, that probably indicates a faulty safety interlock switch at the brake pedal. The same switch could also prevent you from shifting the transmission out of park. There are overrides for both situations. For the starting problem, holding the start button for 15 seconds will turn the car on.

Hard shifting from the automatic transmission is often a sign the car’s electronic controls need to be updated.

Feel the carpeting in the front footwells. If it’s wet, suspect a blockage in the air conditioning condensation drain, which is supposed to direct that water out of the bottom of the car.

The Volkswagen Touareg is the closest thing to a luxury vehicle in this comparison, thanks to its close links with the Porsche Cayenne and Audi Q7. Engine choices were a 3.6L gasoline V6 and a 3.0L turbodiesel. An eight-speed automatic transmission and AWD were standard across the range.

That diesel was one of the engines at the centre of VW’s diesel exhaust emissions scandal. Many of the diesels you find on used lots will have been retrofitted for cleaner emissions, which could have a negative effect on the car’s advertised fuel economy.

While test-driving, play with all of the Touareg’s electronic features to make sure they work. If anything doesn’t function as it should, ask the seller to fix it before you buy so you’re not stuck with a potentially expensive repair bill. This includes the sunroof and power tailgate, both of which should open and close smoothly, with no clunking or grinding sounds.

If any of the Touareg’s electrics – power windows, door locks and infotainment are examples – don’t work or exhibit strange behaviour, suspect a bad battery. Some owners report mysteriously drained batteries that crop up seemingly out of nowhere, but there are often clues a battery is failing.

In your pre-purchase inspection, ask the mechanic to ensure the 3.6L V6’s ignition system is in good working order. Each cylinder has its own ignition coil attached directly to the spark plug, and these are a known trouble spot in a variety of VW models.

Nissan’s long-running Murano got a redesign in 2015 that positioned it between the mainstream and upscale segments. All trim levels use a 3.5L V6 engine and Nissan’s continuously variable automatic transmission (CVT). All-wheel drive was an option.

CVTs are controversial, as many drivers are leery of their long-term reliability. In reality, a well-maintained CVT should prove just as reliable as any automatic transmission. A long life depends on following Nissan’s maintenance schedule, including using only the approved lubricant, which is not the same as that used in other automatics. Ask the seller for maintenance records for your own peace of mind.

Many Murano owners say the batteries used in the remote key fobs don’t last very long. The nice thing is that the car will warn you when the fob battery is low, and when that happens, change it: A dead fob can result in a Murano that won’t unlock or start if it has passive entry and push-button start.

When test-driving, listen for growling or whining noises from the chassis. This could indicate worn wheel bearings, a common Murano failing.

Check that the sunroof opens and closes smoothly, and inspect the car’s carpeting for signs of wetness. The Murano’s sunroof drains are prone to clogging, which can let water leak into the cabin.

Some Murano trims have electric steering column adjustments. If this feature is in the car you test, make sure it works properly. It should move smoothly up and down and fore and aft, and with little noise. Groaning, grinding, or whining indicate the mechanism could be worn and need replacement.