Car Reviews and Tips » How Long Will it Take to Charge an Electric Vehicle? 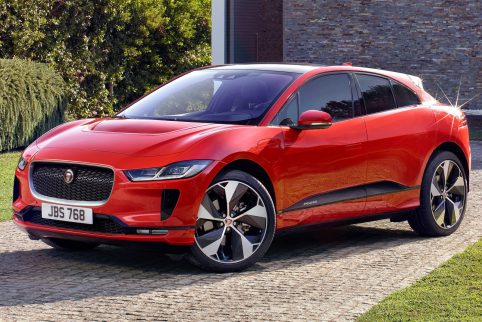 If you’ve got questions about battery-powered cars, you’re not alone. Every time I review an electric vehicle (EV), I can count on at least one stranger asking about some aspect of the ownership experience.

The most common question after “How far will it go on a charge?” is “How long does it take to charge?” In simple terms, it’ll take much longer than filling a gas tank. But the actual answer depends on the size of the battery in the EV you’re driving, the car’s charging system, and where you’re plugging it in. Some more advanced EVs will take on enough charge for hundreds of kilometres in well under an hour, but in others, it could be several hours before the battery has enough juice to make your return trip.

Before we get to the numbers, here’s a quick primer on EV charging. All EVs come with a charging cord that will connect the car to any standard (120V) household power outlet, but this is a painfully slow way to charge an electric car. A typical home solution is to have a level 2 charger installed, which uses 240V current and cuts charging time to well under half that of 120V charging. Most public charging stations will be at least level 2.

Level 3 public chargers exist, too, and typically take a car’s battery from zero to 80 percent charged in about an hour. That 80 percent figure is used because the science of EV batteries means it takes longer to charge the remaining 20 percent.

Ultimately, charging speed is limited by the car’s on-board battery management system, so level 3 charge times will be different for every car. Ambient temperature also affects charging times, so as an EV owner, you’ll have an extra reason to check the forecast. All charging times assume you’re starting with a completely spent battery. 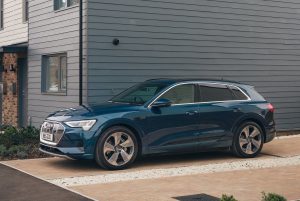 Audi’s e-tron is the brand’s first electric SUV. It’ll go 329 km on a full charge, which you’ll get after 10 hours plugged into a level 2 (240V) charger. Audi says the e-tron will charge to 80 percent in about 30 minutes on a level 3 charger.

BMW currently lists three plug-in cars in its lineup. The most conventional is the 530e, a plug-in gas-hybrid version of the 5 Series. It offers up to 34 km of electric range on three hours’ charging at 240V. 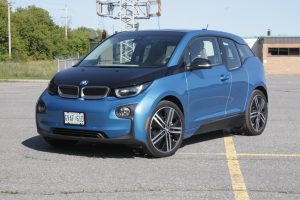 The i3 is an all-electric compact hatchback that takes seven hours to charge at 240V, and will then travel up to 246 km.

The BMW i8 is a plug-in hybrid sports car that will give you about 29 km of electric driving after three hours connected to a 240V charger.

Chevrolet’s sole plug-in car is the Bolt hatchback. It boasts 417 km of driving range after 10 hours at a 240V charger, and Chevy says a level 3 charger will give you 160 km of range in 30 minutes.

Chrysler says the Pacifica Hybrid minivan is good for 51 km of EV range after two hours’ charging at 240 volts.

The Honda Clarity is one of the weirder-looking plug-in cars you can buy, but will travel 76 km on a charge after 2.5 hours at 240 volts, or 12 hours at a regular outlet.

Hyundai has jumped head-first into the EV segment and currently has three plug-in models. Most impressive is the Kona Electric small SUV, which boasts 415 km of range. It’ll charge to 80 percent on a level 3 charger in 54 minutes, or to 100 percent in 9.5 hours at 240 volts.

Next is the Ioniq Electric, whose smaller battery is good for 274 km and will be fully charged after six hours at a 240V charger. Hyundai also makes a plug-in hybrid Ioniq that goes 47 km on a charge after 2.25 hours at 240 volts.

Jaguar’s sole electric model is the I-Pace, with a battery promising 377 km of range after 13 hours at a 240V charger. Level 3 charging will get you to 80 percent in 45 minutes to 1.5 hours, depending on the charger’s output. 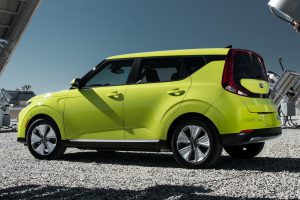 The company’s other full-electric is the eclectic Soul EV. In top trim, its range and charging specs are similar to those for the Niro, but it also comes in a lesser variant with a shorter driving range.

Kia also sells a plug-in hybrid version of its Optima family sedan, which will travel 45 km after 2.7 hours at 240 volts.

Mini’s only fully electric car is the Cooper SE, which promises 177 km after four hours at 240 volts.

There’s also a plug-in hybrid version of the Countryman SUV, which takes three hours to charge at a 240V outlet for 29 km of electric driving.

Mitsubishi offers the industry’s least-expensive plug-in SUV in the Outlander PHEV. It’ll go 35 km on battery power after 3.5 hours of 240V charging, or 25 minutes at level 3 to get to 80 percent.

Nissan sells two versions of its Leaf electric hatchback. The pricier, more powerful Leaf Plus goes 363 km on a charge and takes 11.5 hours to get to that point at 240 volts. A level 3 charger will take the Leaf Plus to 80 percent in 45 to 60 minutes, depending on the charger’s output. 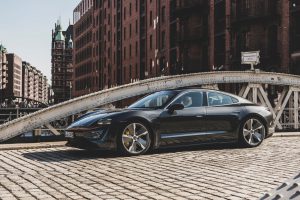 Porsche’s top-line electric model is the Taycan (pronounced TIE-con). The maximum range is about 320 km, achieved after 9 to 11 hours at a 240V charger. Porsche is building a network of Turbo Charger stations that it says will charge the Taycan to 80 percent in 22.5 minutes.

Porsche also sells plug-in hybrid versions of its Cayenne SUV and Panamera sedan, both of which charge in three hours at 240 volts for up to 23 km of electric driving.

Subaru’s first-ever plug-in car is the Crosstrek PHEV, whose 27 km of EV range comes after two hours at 240 volts or five hours at a standard household outlet. 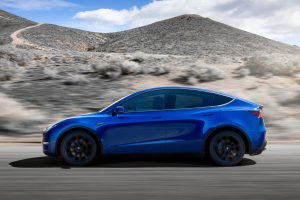 Electric vehicles are all Tesla makes, starting with the compact Model 3. It’ll go anywhere from 151 to 531 km depending on the trim you choose, and will charge in 3.7 to 10 hours at 240 volts. Tesla’s proprietary Superchargers will add 270 km of range in 30 minutes.

The company’s latest addition is the Model Y, with up to 507 km of range. It takes 10 hours to charge at 240 volts, and will gain 275 km in 15 minutes when connected to a Supercharger.

Despite Toyota’s dominance in the hybrid market, its only plug-in car is the Prius Prime hybrid, which promises 40 km of EV driving after two hours at a 240V charger. 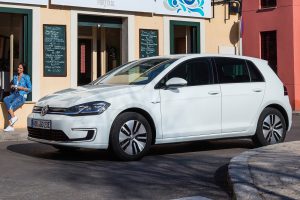 The Volkswagen e-Golf is an electric version of the company’s well-known compact hatchback. It’s good for 198 km of range, which you’ll get from 5.3 hours at 240 volts.

Volvo makes four distinct vehicles that share the company’s plug-in hybrid technology. The compact S60 and V60 sedan and wagon will go 35 km on a full charge; the mid-size S90 sedan will travel 34 km on a charge; and the compact and mid-size XC60 and XC90 SUVs promise 27 and 29 km respectively. All plug-in Volvos take three hours to get to a full charge at a 240V charger.