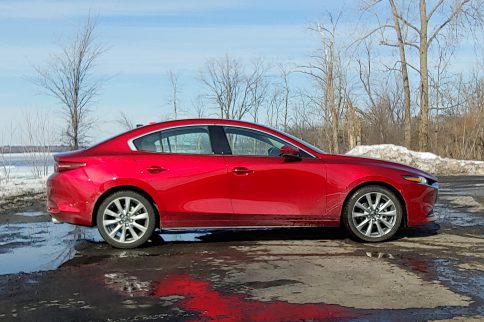 As recently as 10 or 15 years ago, if you wanted an economy car kitted out to match an upscale sport sedan, you were out of luck. There were speedy compacts that could keep up with a sporty luxury car, but few of them offered the features or refinement to satisfy aspirational shoppers.

But in today’s auto industry, you no longer have to pay big bucks to get a nicely done-up car, and the Mazda3 is one of the best examples of that trend.

The Mazda3 was redesigned into a fourth generation in 2019, so changes for 2020 are minor. My top-end GT-trimmed test car is now standard with passive keyless entry, a desirable (in my opinion) feature that was optional last year.

Otherwise, the Mazda3 GT is carried over from last year: It has a 2.5L engine making 186 hp and 186 lb-ft of torque, which comes standard with a six-speed automatic transmission. So equipped, Mazda offers the option of all-wheel drive. The only other compact economy car with four-wheel traction is the Subaru Impreza and its rally-car-wannabe WRX variant.

Lesser Mazda3 trims get a 2.0L engine that can be paired with a manual transmission. 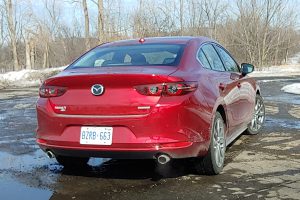 The Mazda3 already has a reputation for being one of the most fun-to-drive compact cars on the market, while each successive generation has also brought more refinement. The addition of AWD adds an extra dose by helping lay down the engine’s power with little drama. That’s most appreciated when accelerating through a corner, where front-drivers would tend to spin the inside front wheel.

That said, acceleration is actually a bit lazy in the car’s normal drive mode. A sport setting makes the Mazda3 feel a lot more lively by making the accelerator pedal more sensitive and keeping the transmission in a lower gear.

Handling is sharp, the ride is firm without being uncomfortable and the chassis did a reasonable job isolating the cabin from Ottawa’s winter-ravaged roads. The GT trim’s 18-inch wheels generate a lot of noise over rough pavement, though.

The Mazda3 is neither a sports car nor a luxury vehicle, but Mazda has incorporated elements of each to make the car feel both sportier and more upscale than most of its competitors.

Fuel consumption estimates for the AWD version of the Mazda3 are 9.2/7.0 L/100 km (city/highway). That includes a class-exclusive cylinder deactivation feature to help save fuel when you don’t need power for acceleration.

While Mazda has made this car feel more upscale with each redesign, it has not added much interior space through the years. The rear seat is particularly snug, with limited leg- and headroom. My test car didn’t boast a surplus of front-seat headroom either. Some of the blame goes to the GT trim’s standard sunroof, without which rear-seat occupants especially would have noticeably more space.

With or without a sunroof, the Mazda3’s tight cabin means it’s one of the last compact cars still officially considered as such by the Canadian government. The Impreza, Honda Civic, Kia Forte, Nissan Sentra and Hyundai Elantra are all large enough to be classified as mid-size cars in Canada’s fuel-economy rankings. 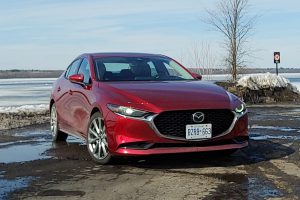 The Mazda3’s interior deserves more positive praise for its look and feel, which contributes to the car’s upscale impression. GT Premium trim gets leather seating in black or white, depending on the exterior colour. If you choose white, it also ends up on the upholstered dashboard panel. The Mazda3 Sport hatchback gets a red interior option instead, which I think is more interesting; it’s also easier to keep clean than white leather.

Mazda packs a lot of technology into the GT trim’s cabin, starting with the 8.8-inch infotainment display that’s standard across the line with Apple and Android smartphone integration. In the GT, the screen controls a 12-speaker stereo and, with the optional premium package fitted to my test car, navigation.

Another GT-only feature is passive keyless entry, a convenient item we wish was available in the Mazda3’s lesser trim levels.

The compact car class is one of Canada’s most competitive non-crossover segments, setting the Mazda3 up against big names like the Honda Civic, Toyota Corolla and Hyundai Elantra.

But the field is much narrower if AWD is on your list of must-have features, as the Subaru’s Impreza and WRX are the only other small sedans with four-wheel traction. Those two cars bracket the AWD Mazda3, performance-wise: The Impreza is more sedate with its 152-hp engine, while the WRX is more sport-focused with a 268-hp turbo engine.

Take away the Mazda3 GT’s AWD, and the most apt comparisons are with the Honda Civic Touring and Si, and the Hyundai Elantra Sport.

The Mazda3 sedan’s base price is $18,000 with the 2.0L engine and manual transmission. By the time you get to the GT and its 2.5L/automatic transmission combo, the price is $26,500 with front-wheel drive. Adding AWD also requires adding the premium package, and those two additions take the price to $30,500.

A Honda Civic Si goes for $30,290, which means you trade the Mazda3’s AWD for the Civic’s more spacious interior. Meanwhile, the Hyundai Elantra Sport is $25,599 and includes most of the Mazda’s niceties, but lacks adaptive headlights, rear parking sensors and collision prevention, and a head-up display.

Whether you think the Mazda3 GT with AWD is a good buy depends on what you’re comparing it to. It’s too small to properly compete with many other cars in the compact sedan class, but the picture changes if you want a small luxury sedan but can’t afford one.

The AWD Mazda3 looks great – literally – compared to the Audi A3 and BMW 2 Series Gran Coupe, upscale all-wheel compacts with prices well into the $40,000 range when equipped to match my Mazda tester.

For drivers with upscale aspirations but a modest budget, the Mazda GT AWD is in a class by itself.