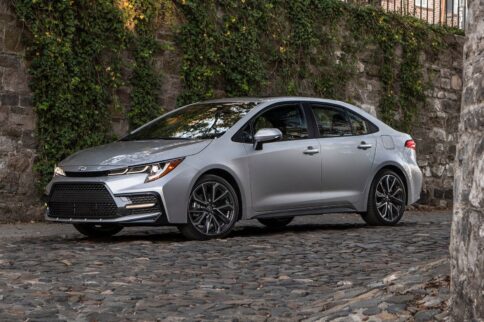 For many years, the compact sedan segment was the anchor of the Canadian new-vehicle marketplace and the source of some of the country’s best-selling vehicles. Compact sedans can no longer boast that kind of sales supremacy, but they remain an important part of Canada’s automotive landscape for their combination of affordable price, efficient performance, and interior comfort.

If compact sedans have fallen off your radar, here’s a state-of-the-segment update to give you an overview of which models are still available and how they’re equipped.

The Honda Civic was redesigned into its 11th generation for the 2022 model year. The outgoing 10th-gen model was a hard act to follow, as it revived the Civic’s fortunes after a few years of relative mediocrity. However, the new design takes what was good about the outgoing model and wraps it in styling that will ultimately age better. In base models, power is from a 2.0L, 158-hp four-cylinder engine, while Touring trim gets a 1.5L turbo motor with 180 hp. Regardless of which trim and engine you choose, a continuously variable automatic transmission (CVT) is the only one available.

Hyundai redesigned its popular Elantra in 2021, giving the car an edgy look and a larger footprint that promises better interior space than in previous designs. What didn’t change was the Elantra’s focus on being an affordable way for drivers to get into a comfortable car that’s also a strong value for money: Even the $18,099 base model comes with heated seats and air conditioning. The base engine is a 147-hp, 2.0L four-cylinder most commonly paired with an automatic CVT, but a six-speed manual is also available. For more performance, Hyundai offers the Elantra N Line, powered by a 201-hp turbo 1.6L engine and a quick-shifting dual-clutch seven-speed transmission.

Though it’s closely related to the Hyundai Elantra, the Kia Forte stands apart thanks to less-adventurous styling that may be more appealing to buyers seeking basic transportation. That said, Kia refreshed the Forte’s exterior in 2022 to give it a more aggressive look. Standard features include A/C and heated seats, while a heated steering wheel, wireless phone charging, and driver safety assists are added when you move one trim up from base. Forte models at the low end of the range use a 2.0L engine with 147 hp and a CVT (a six-speed manual transmission is available but not produced in large numbers), and you can option in a 201-hp, 1.6L turbo with a dual-clutch automatic. Forte pricing starts at $18,295.

The Mazda3 is a perennial favourite in the compact class among shoppers seeking an engaging driving experience. The current fourth-generation 3 was introduced in 2019, adding upscale styling and interior finishes to its list of positive attributes, and in 2021, Mazda added AWD and a 227-hp turbocharged engine to the 3’s option list. Though it’s not as strong a value as some of its competitors, the Mazda3 nonetheless comes standard with A/C and heated seats, and options include a head-up display, auto-dimming side mirrors, and a wiper de-icer. A 2.0L four-cylinder engine with 155 hp powers entry-level models, starting with the $21,400 GX trim level; mid-range cars get a 191-hp, 2.5L that can be optioned with AWD. The top trim is where you can add the turbo engine. Base models come with a six-speed manual transmission, while all other versions get a six-speed automatic.

The Nissan Sentra has long been a significant player in the compact sedan market, thanks to its strong value, generous interior space, and good fuel economy. In 2020, the eighth-generation Sentra came to Canada with sharp new styling and a long list of driver safety assist features that are standard across the lineup. Base models also come with the creature comforts expected in this class – heated seats, A/C, and keyless entry – and you can add more convenience items by moving up the trim ladder. In all Sentra trims, power is from a 2.0L four-cylinder engine making 149 hp and connected to either a six-speed manual transmission or an automatic CVT. The Sentra’s price starts at $20,098 and tops out at $26,098.

In September 2022, Subaru announced this will be the final year for the sedan version of the Subaru Impreza, signalling the end of the line for the only car in the class with standard all-wheel drive. The Impreza sedan starts at $22,995 in Convenience trim, which includes the brand’s EyeSight suite of safety kit and an automatic transmission connected to a 152-hp four-cylinder engine. Moving up to the Touring trim ($24,895) gets you popular features like heated seats, a wiper de-icer, a heated steering wheel, and passive keyless entry. If you want an Impreza with a manual transmission, you can get it in the Impreza hatchback, which will be the only way to get this car starting in 2023.

Over more than 40 years, the Toyota Corolla has built a reputation around rock-solid reliability and thrifty fuel economy. More recently, Toyota has upped the Corolla’s game by sharpening the car’s looks with new hatchback and sedan designs introduced in 2019 and 2020, respectively. The Corolla is also a better value than it used to be: For 2022, the $18,990 Corolla L is the sedan’s entry point, with a 139-hp engine; a 169-hp motor is optional in the sedan and standard in hatchback models. The Corolla LE sedan is a value leader with heated front seats, automatic A/C, a wiper de-icer, and blind spot/cross-traffic monitoring for $22,250.

In the past, the Volkswagen Jetta was marketed to compact-car buyers looking for an upscale alternative to class best-sellers like the Corolla and Civic. Today, however, VW takes a more pragmatic approach to the compact sedan segment. In 2022, the Jetta in Canada comes standard with heated seats, steering wheel, side mirrors, and washer nozzles, all nods to our harsh winter season. Pricing starts at $22,895 in Trendline trim, while the mid-range Comfortline adds automatic climate control, a power driver’s seat, wireless phone charging, and adaptive cruise control for $25,895. The Jetta’s base engine is a 158-hp turbo four-cylinder engine, which comes standard with a six-speed manual transmission you can option to an eight-speed automatic. A sportier Jetta GLI gets a 228-hp motor and is priced to start at $31,895.