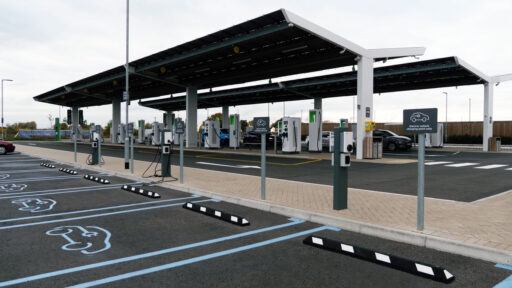 Multiple electric vehicle (EV) networks are available across Canada, contributing to nearly 7,000 locations and over 16,000 chargers in total. With a standard 120V outlet or professionally installed Level 2 charger, you can charge an EV from home. If you need to boost your battery on the go, you’ll need to locate a public charging station that offers Level 2 or Level 3 charging.

Let’s look at some of the main charging networks in Canada.

Based in Québec, FLO is the largest charging network in the country at the time of writing. They have over 1,700 Level 2 charging stations and 190+ Level 3 stations across all ten provinces and the Yukon. To use a FLO charger, EV owners simply sign up for an account and add funds to their profile. You can use the mobile app or request a FLO card to make a purchase at a station. This setup is becoming fairly standard across charging networks. FLO membership also gives you access to several other charging providers for no additional fees.

With the growing numbers of EV sales, many people are concerned about how charging infrastructure will keep up . One way FLO is looking to ease these concerns is by installing chargers beside condominium parking spaces, giving each tenant access with a monthly fee.

Tesla charging is available in every province excluding Newfoundland and Labrador and the three territories. Other EVs can use Level 2 Tesla chargers, but you’ll need a Tesla account and an adaptor to access Superchargers.

Despite being based in California, ChargePoint has EV chargers stationed across all ten Canadian provinces. This includes over 130 Level 3 stations and 1,150+ Level 2 stations. They’re partnered with many other networks across North America, including FLO.

Aside from national networks, you’ll also find provincial/regional charging networks within certain parts of the country.

Looking forward, the Electric Circuit is interested in exploring options for short-term mobile charging and further expansion across Québec and beyond by partnering with other networks.

For New Brunswick locals, the eCharge network offers about 26 Level 3 charging stations and 60 Level 2 stations. As one of the smaller networks, eCharge is looking to expand their reach by partnering with bigger players in the near future. They currently have a roaming agreement with the Electric Circuit and FLO.

In 2020, Ontario Power Generation and Hydro One launched the Ivy Charging Network. Since then, the network has grown to offer 35+ Level 3 stations and 30+ Level 2 stations across Ontario. An ongoing goal for this network is to install EV chargers at every ONroute rest stop along the 400-series highways.

The Future of EV Charging Infrastructure

The number of EV charging stations is constantly growing as networks continue to expand and further their reach across the country. Since 2021, the Government of Canada has been working toward a goal of installing 50,000 additional chargers by 2026. If accomplished, this’ll greatly improve the accessibility and convenience of EVs for Canadians. Thinking about switching to an EV? Check out our blog for more information to help you make your decision.