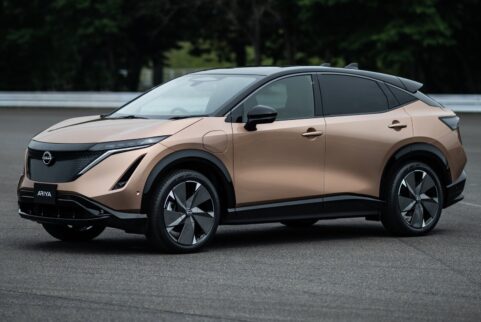 In this month’s notable auto news headlines, we learn the first details of Ferrari’s first-ever SUV model, the Purosangue, which eschews high-tech hybrid technology for an old-school V12 engine.

Meanwhile, the BMW XM SUV continues the brand’s transition away from combustion engines as its first high-performance M model with an electrified powertrain.

Nissan is making its next move into the EV space with the Ariya crossover, a long-awaited follow-up to the Leaf compact car. It will arrive more than a year before Honda’s first all-electric effort, a mid-size SUV called the Prologue, which will come to Canada in 2024.

And finally, Genesis has plugged an all-electric powertrain into its mid-range sedan to create the Electrified G80, the brand’s second EV.

After years of speculation and rumours, Ferrari has confirmed it will begin selling its first SUV model, the Purosangue, next year.

With a name that means “thoroughbred” in Italian, Ferrari seems keen to establish that while an SUV is a departure for the exotic car company, the Purosangue sticks to the brand’s traditional focus on speed and sharp handling. While many new prestige and exotic models come with ultra-modern plug-in powertrains, Ferrari’s first-ever SUV gets its 715 hp and 528 lb-ft of torque from a high-revving V12 promising a 3.3-second sprint to 60 mph (96 km/h) and a 310-km/h top speed.

Canada’s Multimatic supplies the Purosangue’s sophisticated suspension, which lets the car squat closer to the ground at high speeds for a lower centre of gravity and improved handling. The so-called active spool valve suspension also means the car can keep an even keel in aggressive cornering without anti-roll bars.

The Purosangue is underpinned by a bespoke platform with rear-hinged rear doors and four heated and fully adjustable seats. Up top, a carbon fibre roof cuts weight and further lowers the centre of gravity, but buyers can opt for a glass roof with an electrochromic sunshade.

Despite its big V12 engine, the Purosangue does come with a few nods to environmental awareness. Ferrari says most of the car’s trim comes from sustainable sources, like recycled plastic, and the cabin’s Alcantara-like upholstery is made of recycled polyester.

Ferrari hasn’t said what the Purosangue’s MSRP will be, but don’t be surprised if it approaches – or exceeds – $500,000 in Canada.

Next spring, BMW will advance the state of the high-performance SUV with the XM, the brand’s first proper M model with an electrified powertrain – in this case, a plug-in hybrid setup.

Unlike pretty much all previous BMW M cars, this one is a standalone model that doesn’t have a lower-priced equivalent the way the M3 is based on the standard 3 Series, for example.

Most of the XM’s 644 hp and 590 lb-ft of torque comes from a 4.4L turbo V8 gas engine, but it’s backed up by an electric motor that contributes 194 hp/332 lb-ft to those totals. BMW says the two power sources propel the XM from 0-100 km/h in 4.3 seconds, making it about half a second slower to triple-digit speeds than both the pure-combustion-powered X5 M and the all-electric iX M60 (the latter, despite its label, is not marketed as a full-on member of the M family of vehicles). BMW says the XM will promise about 50 km of electric driving range with a full charge of its battery.

If you want performance to match the X5 M and iX M60, look to a Red Label variant of the XM that will boast 735 hp and a matching torque figure.

The XM also marks a cosmetic break from BMW tradition: The only instance of the brand’s iconic blue-and-white logo will be on the hood, while the tailgate will get an XM badge and the wheel centre caps will bear a BMW wordmark.

BMW says it will begin selling the XM here in spring 2023, following the start of production near the end of this year in Spartanburg, South Carolina. Pricing will be revealed closer to the car’s on-sale date.

Nissan Canada has announced its first all-electric crossover will carry a $52,998 starting price when it reaches showrooms early next year. The Ariya is Nissan’s second EV and comes to market more than a decade after the launch of the Leaf compact car, North America’s first mass-market electric vehicle.

The Ariya’s base price applies to the entry-level Engage FWD trim level, whose 63-kWh battery will generate 214 hp. Nissan doesn’t say how much driving range that battery will provide, but an 87-kWh long-range upgrade promises up to 490 km of range and as much as 389 hp.

A Venture+ FWD model will be the second step up the trim ladder at $59,498, which includes the larger battery.

An Evolve+ e-4orce variant will be the most affordable AWD model, powered by the smaller battery and priced at $60,598. There will also be a FWD Evolve model with the big battery and a $64,998 price tag. Platinum+ will be the priciest AWD model at $69,198, while the range-topper will be a front-wheel drive Premiere trim priced at $69,998.

Genesis has begun selling its first all-electric sedan model, the Electrified G80, a battery-powered mid-sizer that went on sale in Canada in early October for $105,000.

Based on the second-generation G80 introduced in 2021, the Electrified G80 swaps out that car’s turbo four- and six-cylinder engines for a pair of electric motors – one up front, one at the rear – that combine for 365 hp and 516 lb-ft of torque. Those figures give up 10 hp to the V6-powered G80 but best its torque figure by 125 lb-ft.

The Electrified G80 is Genesis’s second all-electric model, following the GV60 compact crossover that went on sale here in the spring.

In early October, Honda revealed the first images and specifications for its Prologue crossover, an all-electric model scheduled to arrive in Canada in 2024.

Honda says the Prologue will be positioned alongside the mid-size Passport in the brand’s SUV lineup, but it won’t be an electric analog to it. The Prologue will ride on a longer wheelbase, and will be narrower and sport a roofline nearly 20 cm lower.

Honda hasn’t revealed any other Prologue specs or so much as hinted at pricing, but says the electric crossover will have a panoramic roof and a tech-intensive cabin with an 11.0-inch driver info display and an 11.3-inch infotainment touchscreen.

The Prologue will be the first of 30 EVs Honda says it will launch globally by 2030, and will contribute to the brand’s goal of achieving carbon neutrality in its product lineup and corporate activity by 2050. While Honda looks forward to the Prologue’s 2024 launch, its nearer-term plans include an all-new CR-V Hybrid set for a late-2022 arrival. It will be the first gas-electric version of that compact crossover to be sold in Canada.