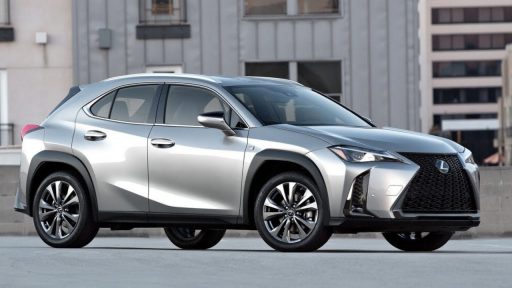 The Lexus UX is a subcompact crossover made by Toyota’s luxury brand. Introduced for the 2019 model year, it’s the least-expensive Lexus model, and the only one with a price that dips under $40,000.

Based on the same underpinnings as the Toyota C-HR, the UX boasts flashier styling and nicer interior appointments that Lexus hopes buyers will feel are worth a $14,000 premium over the C-HR.

Part of the UX’s appeal is that it’s the only way to get Toyota’s smallest crossover platform with both AWD and a hybrid powertrain. Those come bundled in the $40,000 UX 250h.

Decades of speedy German sport sedans have made it easy to expect any luxury vehicle to be a performance champ. However, the luxury segment’s recent stretch downmarket means entry-level models like the UX drive in a fairly ordinary fashion.

The UX 250h derives 181 hp from its gas engine and electric motors, making it a bit stronger than the gas-only UX 200. Most of the performance benefit comes in relaxed driving, where the electric motor’s torque pulls the car along. That lets the gas engine spin at low revs (or turn off altogether, in some cases), making this the most refined version of the UX.

The UX presents an attractive dashboard with most controls arranged logically — once you find them all. I had to take a good hard look for the volume control, which is built into the leading edge of the centre armrest. Ergonomically, it’s better-placed for the driver than the front passenger, a common design flaw in modern cars that have already have volume controls on the steering wheel.

Another design quirk is the placement of the UX’s drive-mode control on a knob that hangs off the right side of the gauge-cluster housing, like something out of a 1980s Subaru.

Infotainment functions are managed with a touchpad just in front of that well-hidden volume control. It’s a questionable setup that’s difficult to use while driving the car. This is Lexus’s attempt to differentiate their Enform system from dial-based arrangements like BMW’s iDrive. However, Lexus would have done better to take cues from iDrive, which has evolved into a relatively user-friendly interface.

The UX’s economy-car roots show up in the front inside door panels, whose upper portion is a single piece of plastic with little to dress it up, a detail that stands out in a cabin that’s otherwise nicely finished.

Front-seat occupants get a surprising amount of space considering the UX’s small footprint. The rear seat reveals that Lexus conceived the UX primarily for couples and single drivers who will only make occasional use of the three-place bench.

The trunk offers a useful-sounding 486L of volume, but the space is shallow. The rear seats fold completely flat, turning the UX into a handy-enough cargo hauler.

My test car came with the $5,300 luxury package. It added navigation in a 10.3-inch touchscreen, an eight-speaker stereo, a hands-free tailgate, a head-up display, wireless smartphone charging, and parking assist with automatic braking.

The Buick Encore is a stronger value than those models, with a sub-$40,000 price. However, it comes only with lane departure, blind-spot alerts and forward-collision alerts, rather than the other models’ more advanced intervention systems.

The UX 250h is also the only car of this bunch with a thrifty hybrid powertrain.

It can be hard to see the UX’s value when you know it’s based on the much less expensive Toyota C-HR. But if you’re in the market for a small, upscale utility vehicle, the Lexus beats most of its competitors on price.

The UX’s extra cost is largely justified by its smooth drive and overall upscale look and feel. Before you buy, though, make sure you can live with this Lexus’s poorly executed infotainment system and other weird ergonomic touches.