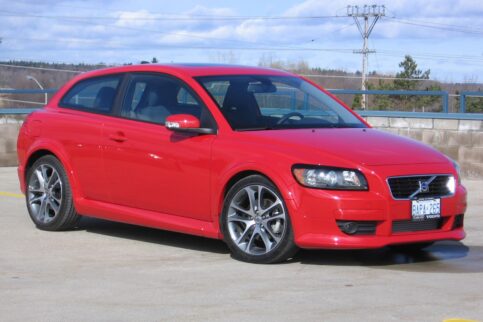 Subcompact cars are common in today’s luxury car marketplace, conceived by upscale automakers to foster brand loyalty among drivers who are younger and less-affluent than the traditional luxury-car buyer.

While today’s entry-level luxury offerings are mostly a mix of small sedans and crossovers, many early upscale subcompacts for North America were hatchbacks. Those are the models we’re looking at in our latest used vehicle buyer’s guide: the Audi A3, Lexus CT200h, Mercedes-Benz B-Class, and Volvo C30.

In 2006, Audi added the A3 hatchback to its range of compact cars. At the time, it was the brand’s smallest model, sharing some of its structural and mechanical components with the VW Golf and GTI. Initially, Audi offered the A3 with a 200-hp, 2.0L turbocharged gas engine or a 250-hp, 3.2L V6. In 2010, it added a 140-hp TDI diesel. Transmission options were a six-speed manual, or a six-speed dual-clutch automatic. Both front- and all-wheel drive were available.

Audi redesigned the A3 in 2015, but has only offered that car here as a sedan.

If you’re looking at a used A3 with the optional DSG dual-clutch automatic transmission, ask the seller if they have the car’s service records. The DSG’s performance is excellent, but long-term reliability depends on diligent maintenance, including fluid changes according to Audi’s maintenance schedule. During your drive, the transmission should make smooth, quick shifts. Any hesitation or clunky performance could indicate mechanical problems. If in doubt, a good pre-purchase inspection should either confirm your suspicions or put your mind at ease.

The A3’s 2.0L turbo four-cylinder engine (which was used by a number of VW and Audi models) is known for problems with its high-pressure fuel pump, as discussed here. Read more about this problem here.

When you arrive for your A3 test drive, start the car when it’s cold and let it run for a few minutes, watching for smoke from the exhaust as the engine warms up. Blue smoke means the engine is burning oil, which often points to failed turbocharger seals and means the car needs a new turbo.

Engine ignition-coil failures are another well-known issue with this engine. However, these parts are quite easy to replace.

Here’s a discussion about air-conditioning compressor failures in the Audi A3.

VW and Audi use direct fuel injection to add performance and improve fuel economy in their 2.0L turbo engine. Over the long term, though, direct injection can allow carbon deposits to build up on the intake valves, which can actually hurt both performance and economy. The good news is that these deposits can be cleaned off. The bad news is it costs money, adding to your long-term maintenance bills.

With its turbocharged engine and a wide range of aftermarket parts available, the A3 is popular with performance driving enthusiasts. If you find a used A3 with aftermarket components, assume that car has been driven harder than the average version.

Introduced in 2011, the Lexus CT200h was the luxury brand’s first compact hybrid model, based heavily on the Toyota Prius. Despite its sporty looks, the CT’s performance is modest, with a focus on fuel efficiency. Lexus updated the CT’s styling in 2014 and tweaked its standard and optional features here and there, but it went away after 2017. In all cars, a 1.8L engine and electric motor combined for 134 hp.

Lexus redesigned the CT200h engine’s intake manifold after owners complained of knocking/rattling sounds when the engine is started cold. In some cases, the noise persisted or returned after the manifold was replaced. Read more about this problem here.

Before starting your test drive, check the CT200h’s engine coolant level. If it’s low, that could indicate a leak, which some owners have reported in Lexus discussion forums. Low coolant will most likely be caused by a leaky hose, but it could also point to a bad engine head gasket, though that’s a rare problem in these cars.

Here, CT200h owners discuss front passenger door handle trim that can fall off when the door is opened.

Toyota and Lexus hybrid vehicles have proven very reliable, but before you buy a CT200h, have it inspected by a technician trained in servicing hybrids. They can do a full diagnostic of the car’s mechanical and electronic systems to determine whether the battery and drive system are in good shape for the age of the car.

While the CT200h’s hybrid powertrain uses a large battery to provide electric drive, it also has a regular 12-volt battery that powers the car up when you push the start button. If a CT200h displays any strange electrical issues, start by having your technician test the 12-volt battery and its charging system.

Finally, test all of the CT200h’s electrical and electronic components – power windows, climate control, infotainment and audio – to see that they all work as they should.

Mercedes-Benz began its appeal to younger car buyers with the 2006 B-Class hatchback. The first-generation B-Class was offered as the B200, which came in base and Turbo models whose 2.0L engines made 134 hp and 193 hp, respectively. All first-generation B200s started out with a manual transmission that buyers could switch out for a continuously variable automatic transmission (CVT).

In 2013, Mercedes introduced the second-generation B-Class, called the B250. Its more sophisticated 2.0L turbo engine made 208 hp and came with a seven-speed dual-clutch automatic transmission. The 2015 model offered AWD for the first time.

The 2019 model year was the last for the B-Class in North America. Mercedes-Benz then replaced it with the A-Class sedan and hatchback.

If you’re shopping for a first-generation B-Class with the optional CVT, ask your mechanic to verify the transmission’s condition during a pre-purchase inspection. Some B-Class owners have had to replace failed CVTs.

When new, one of the B-Class’s options was a multi-panel sunroof with louvers that tilt up and then slide back. If the car you’re testing has this roof, make sure it opens and closes properly; some owners have had problems with the roof not opening or closing fully. Replacing the assembly is apparently quite expensive.

If you can confirm the roof works well, close it, take the car through a car wash, and watch for water leaks, which can be caused by blocked sunroof drains or faulty panels.

Look out for rust on the first-gen B-Class’s tailgate and doors, which was apparently more of a problem in early cars.

When test-driving a second-generation B-Class, watch for a transmission that gets cranky about shifting into reverse, or only shifts through either its even- or odd-numbered forward gears. In some cases, a Mercedes technician can fix this problem by resetting the transmission’s electronics, but in other cases, a transmission replacement is the only solution. Some owners also report a transmission that fails to downshift for acceleration.

Regardless of which generation or model year of B-Class you’re test-driving, spend a few minutes verifying that all the car’s electronic and electrical features work properly, including power windows/mirrors/locks, and climate controls. The second-generation car has Mercedes-Benz’s COMAND infotainment system, which uses a rotary dial to control the display screen. It should respond to your inputs promptly and without freezing or randomly restarting.

The stylish Volvo C30 has relatively humble roots, sharing some of its structural elements with the original Mazda3 and the Ford Focus. During its seven-year production run, the C30 used five-cylinder engines ranging from a 168-hp 2.4L to a turbocharged 2.5L with 227 hp. Six-speed manual and five-speed automatic transmissions were offered. The C30 was nearly the same mechanically as the S40 and V50 sedan and wagon, so much of the information we’ve included here applies to all three cars.

If a C30’s engine stutters or shudders when running, those symptoms may point to a faulty fuel-pressure sensor. The same symptoms could also indicate a failed positive crankcase ventilation (PCV) or breather system.

A vibration that occurs during hard acceleration could be caused by failed engine mounts.

The C30’s engines use a rubber timing belt to drive the camshafts. This belt has to be replaced at regular intervals, so if the seller doesn’t know when it was done last, assume the car needs a new one.

Here’s a discussion about owner experiences with the C30’s air conditioning compressor. And here’s another thread about problems with the system that directs air to the car’s different dashboard vents.

If you experience any strange behaviour in the C30’s electronic or electrical systems, start your diagnostic by checking the battery. An old and/or weak battery can cause all kinds of weird issues even if it has enough power to start the car.

One known weak point in the C30’s rear suspension is the upper shock absorber mounts. These parts can weaken over time and break when the car is driven over rough pavement. Thankfully, replacement parts are cheap and easy to install if you’re comfortable working on your own car.

Because the C30 was available with a turbocharged engine, it was popular with aftermarket tuning enthusiasts. A used C30 with aftermarket engine components may be best avoided, as such a car is more likely to have been driven hard by its previous owner.