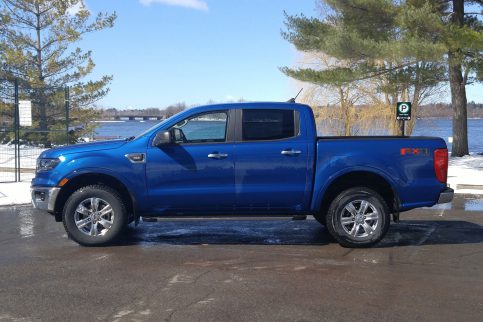 The market for small pickups has undergone a big shift in the last few years. The changes began in 2015 with the Chevrolet Colorado and GMC Canyon, which returned from a hiatus as mid-size models to replace their compact predecessors. Toyota followed in 2016 with a redesigned Tacoma that had also grown larger.

Now it’s Ford’s turn, with a reborn Ranger, a name that disappeared from the pickup segment in 2012. What was last sold as a basic compact is back as a mid-size promising more refinement, performance and capability.

Ford’s single engine offering is a 2.3L turbocharged four-cylinder that makes 270 hp and 310 lb-ft of torque. At higher engine speeds, it can’t quite match the performance of GM’s and Toyota’s optional V6s, but all that torque does make the Ranger feel potent when accelerating from a stop.

GM offers more variety in its Colorado and Canyon trucks, with four-cylinder gas and diesel engines and a gas V6. However, Ford has combined the best traits of diesel and gas engines in the Ranger’s sole powerplant.

The Ford Ranger’s 10-speed automatic transmission is the first of its kind in a mid-size truck.

I know the pickup market is all about numbers, but the closely spaced ratios seem like overkill considering the engine’s torque. It’s a good thing the transmission works smoothly, because it seems like it’s always shifting.

Even at cruising speed, it responds to the smallest changes in road speed or gas-pedal movement. On a run between Ottawa and Toronto along Highway 7, the truck seemed happy to quietly cruise in 10th at about 90 km/h. However, even the slightest hill or gentlest acceleration would prompt a downshift to ninth or even eighth.

The Ranger’s ride is rough even by truck standards. There’s a lot of bounce over uneven pavement, especially from the rear, where the suspension is built more for payload capacity than comfort. Still, with an empty bed, the Ranger’s suspension felt less compliant than that of GM’s Chevrolet Colorado and GMC Canyon and the Toyota Tacoma.

Washboard surfaces brought out the worst of the ride in our test truck. Even after slowing down considerably for one particularly bad stretch of unpaved road, the rear end shimmied side-to-side alarmingly.

My Ranger test truck had an optional FX4 off-road suspension with specially tuned shock absorbers. If you don’t plan to do much off-roading, test-drive a Ranger with the standard suspension to see if you like the ride better.

Ford offers the Ranger in a SuperCab configuration with a long cargo box or a SuperCrew setup with a short box. My tester was a SuperCrew version, which gets full-size rear doors and seating.

Ford says the Ranger is rated to tow as much as 3,401 kg with an optional hitch receiver upgrade and wiring harness. Payload is 748 kg in the SuperCab and 707 kg in SuperCrew form.

None of those figures are a lot lower than entry-level versions of Ford’s larger F-150 pickup.

All of those extras took my Ranger’s as-tested price to almost $43,000.