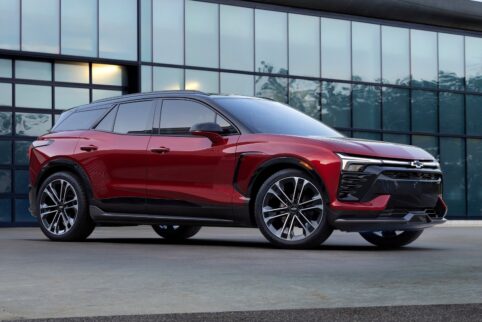 Electrified vehicles continue to dominate the auto industry’s news headlines, but this month’s stories illustrate that not everything is about battery power.

That’s especially true in the Ford camp, where that company is getting set to launch the F-150 Raptor R, a more potent version of the existing Raptor off-roader that will generate its power the old-fashioned way – with a gasoline V8. And Honda has revealed initial details of its next-generation Civic Type R, which it says will be the most powerful Type R ever.

On the electrified vehicle front, Hyundai will continue its push into the EV marketplace with the arrival of the Ioniq 6 electric sedan in early 2024. And next summer, the Chevrolet Blazer EV will give that brand a fully electric offering in the popular mid-size crossover category.

Finally, Toyota will add a new hybrid model called the Crown to its lineup this fall; it’s an upscale sedan with crossover cues that will be available with two different gas-electric powertrains.

Later this year, Honda will reveal full details of its all-new Civic Type R, which the company says will be the most powerful hot hatch it has ever made.

Based on the current 11th-generation Civic hatchback’s platform, the 2023 Honda Civic Type R will be the second generation of the car to come to Canada; the outgoing version was sold here from 2018 through 2021.

Despite Honda’s claims that the new Type R will be the most powerful one ever, the company stopped short of actually revealing how much power its 2.0L turbo engine will generate. The old Type R boasted 306 hp and 295 lb-ft of torque from a similar motor.

The 2023 Civic Type R’s look is more understated than the old one, thanks to the 11th-gen Civic’s smoother styling. Go-fast touches carried forward include a tall rear spoiler and triple exhaust tips in the middle of the rear bumper. Honda has downsized the Type R’s wheels to 19 inches from the old car’s 20s.

Even if the new Type R boasts just a one-hp advantage over its predecessor, you can expect it to be quick: Honda says the car set a record at Japan’s Suzuka racetrack and was also tested at Germany’s Nurburgring.

Honda will offer the Civic Type R exclusively with a six-speed manual transmission, which will feature an improved version of the old car’s rev-match system. The powertrain will also have a new R+ drive mode and a data logger for recording racetrack lap times.

Honda says it will publish full specs for the 2023 Civic Type R this fall.

Hyundai’s next electric vehicle will be the Ioniq 6, a mid-sized family sedan that should arrive in Canada early next year.

Though it rides on the same platform as the Ioniq 5 crossover that went on sale in 2021 (as a 2022 model), the Ioniq 6 wears a streamlined shape that appears to have been inspired by the current Hyundai Sonata.

Hyundai says the Ioniq 6 will be one of the most energy-efficient electric vehicles in the marketplace when it goes on sale, promising up to 610 km of range based on the European energy consumption test cycle. Expect the car’s North American driving range estimates to be more conservative as Canada and the United States use a different test method that more accurately predicts real-world range.

The Ioniq 6’s base configuration will be a single-motor, rear-wheel drive model, but a dual-motor setup with all-wheel drive will be offered.

Inside, two 12.0-inch displays serve up driving data and infotainment functions, and the car will come standard with a highway driving assist system and a suite of the usual collision avoidance features.

Hyundai says it will start building the Ioniq 6 in Korea later this year, and will announce more details closer to the car’s North American launch.

Later this year, the 2023 Ford F-150 Raptor R will begin rolling off the assembly line to become the most powerful version in the current F-150 pickup’s lineup.

Based on the existing F-150 Raptor, the Raptor R trades a 3.5L turbocharged V6 for a 5.2L supercharged V8 borrowed from the Mustang Shelby GT500 muscle car. In the Raptor R, the V8 will make 700 hp and 640 lb-ft of torque and will benefit from a bespoke oil pan to help avoid oil starvation at extreme off-road angles.

An active exhaust with an extra-loud Baja setting will let the engine sing, but will also feature a quiet mode so you don’t annoy your neighbours. A long-travel suspension, adaptive dampers and 37-inch tires help generate maximum grip for off-road driving.

Ford has started taking orders for the Raptor R, but hasn’t revealed the new truck’s price yet. Don’t be surprised if it’s well over $100,000, as the standard Raptor goes for nearly $94,000.

Next summer, Chevrolet says it will bolster its electric-vehicle lineup with the 2024 Blazer EV, a mid-size crossover that will spawn the brand’s first all-electric high-performance model.

Though it shares its name with a gas-powered crossover that’s been in Chevy showrooms since 2019, the Blazer EV will ride on a dedicated battery electric platform shared with the recently introduced Cadillac Lyric and will use the company’s Ultium battery technology.

Chevrolet says the Blazer EV’s maximum driving range will be 515 km in RS rear-drive form, while the sporty Blazer EV SS will prioritize performance with as much as 564 hp and 648 lb-ft of torque.

The two-row Blazer EV promises plenty of tech no matter which drivetrain you choose. A 17.7-inch touchscreen and an 11.0-inch gauge display will be standard, as will heated front seats and steering wheel; ventilated seats will be an option. Chevrolet will also offer a hands-free start feature that will turn on the car when you press the brake pedal, as long as you have the key with you. GM’s Super Cruise highway driving assist suite will also be available.

The Toyota Crown upscale sedan will return to Canada this fall after a 50-year hiatus to replace the Avalon as the brand’s flagship four-door.

For the Canadian market, the Crown combines a sedan body with a crossover-like ride height; in other markets, that car will be part of a four-model Crown lineup that includes a regular sedan, a sporty small crossover, and a larger crossover variant.

The 2023 Crown will be offered exclusively with hybrid powertrains. The top choice will match a 2.4L turbo four-cylinder engine with front and rear electric motors for a total of 340 hp; that configuration will be limited to the Platinum trim level.

Lesser Crown variants will get a naturally aspirated 2.5L engine with two electric motors. Toyota doesn’t say how powerful that setup will be, but our guess is it will make about 240 hp, which is what a similar setup generates in the redesigned 2022 Lexus NX crossover.

Toyota says it will reveal the Crown’s pricing closer to its arrival in Canada later this year.