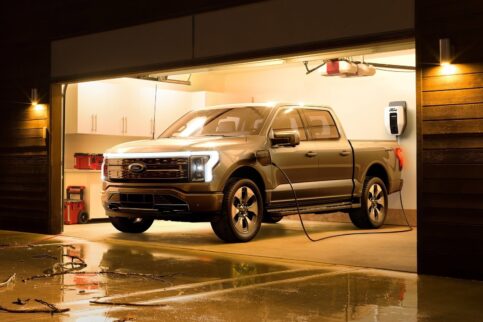 As summer 2021 reaches its peak in Canada, the country’s automakers are getting set to launch some significant new and redesigned models.

Among them is the 11th generation of the Honda Civic sedan, which is already in the brand’s showrooms ahead of an equally new hatchback model due later in the year.

One of the Civic’s closest competitors, the Toyota Corolla, is about to get a new crossover spinoff called the Corolla Cross that will mark the first time the nameplate has been used on an SUV.

Ford is taking its F-150 pickup truck into new territory with an all-electric variant called Lightning that promises plenty of utility to go with its zero-emissions powertrain.

And later this year, Lexus will begin building its second-generation NX compact crossover model in Ontario with an expanded range of powertrains, including an NX-first plug-in hybrid.

The all-new 11th-generation 2022 Honda Civic went on sale earlier this summer in sedan form, and will be joined later in 2021 by a redesigned hatchback version.

If you thought the outgoing 10th-generation Civic was overstyled, you’ll be pleased to see Honda has toned down the car’s looks for 2022. The newly simplified lines hide the fact that the new car’s wheelbase is 350 mm longer and gives the impression of a smaller car overall, though the body is a bit longer and wider than before.

Honda also completely redesigned the Civic’s interior. A new dash emphasizes the cabin’s width and evokes the look of Civic dashboards of the 1980s with A/C vents hidden in a mesh strip spanning the dash. A new 7.0-inch touchscreen sits atop the centre stack; top-trim models get a 9.0-inch infotainment display and a 10.2-inch all-digital gauge cluster.

Among the Civic’s notable standard features are automatic A/C (with a dual-zone function in higher trims); passive keyless entry; an eight-speaker stereo; and a driver safety assist suite comprising forward collision detection/avoidance, lane-departure warning, blind-spot monitoring, lane keep assist, and traffic-jam assist. The only safety items you have to pay extra for are low-speed braking control and a rear cross-traffic monitor.

About all that’s carried forward from the old Civic are the car’s powertrains. In the Civic sedan, LX, EX, and Sport trims get a 2.0L four-cylinder engine making 158 hp and 138 lb-ft of torque, and Touring gets a 1.5L turbo four-cylinder with 180 hp and 177 lb-ft. Both engines are standard with a continuously variable automatic transmission (CVT).

The forthcoming Civic hatchback will use the same engines, but the 2.0L will be limited to LX trim, and Sport and Sport Touring will get the turbo motor. Again, a CVT will be standard, but here Honda will make a six-speed manual optional in all trims and with both engines.

Later this year, Toyota’s long-running Corolla nameplate will appear on a crossover model for the first time when the subcompact Corolla Cross arrives in Canada.

The forthcoming small utility vehicle will be Toyota’s first mainstream offering in the subcompact SUV class, wearing more conventional styling than the C-HR that has served entry-level Toyota shoppers since 2018.

The Corolla Cross comes standard with the same continuously variable automatic transmission (CVT) offered in the Corolla sedan and hatchback models; its trick is a first gear that gets the car moving from a stop before the CVT takes over to manage power flow to the wheels.

The new model’s AWD system can direct as much as half of the engine’s power to the rear wheels and can completely disconnect the rear axle when its extra grip isn’t needed. Whether you choose front- or all-wheel drive, Toyota says the Corolla Cross can tow up to 680 kg (1,500 lbs).

Toyota hasn’t announced pricing yet, but says the Corolla Cross will come in L, LE, and XLE trim levels. All will feature the Toyota Safety Sense 2.0 suite of driver-assist features, and LE and XLE will add a blind-spot monitor and rear cross-traffic alert.

Though the Ford F-150 Lightning won’t go on sale until spring 2022, the company has already revealed many details about the all-electric version of this ultra-popular full-size pickup truck.

Those details include a starting price in Canada of $68,000 for the XLT trim, for which you will get 426 hp, 775 lb-ft of torque and about 370 km of driving range, while an extra-cost, extended range battery will generate 563 hp and promise more than 480 km of range.

Ford says those power figures allow the F-150 Lightning to tow just over 4,500 kg (10,000 lbs) and handle payloads of up to 907 kg (2,000 lbs). That payload figure includes whatever you can fit into the Lightning’s 400L front trunk, which takes great advantage of the truck’s lack of a gas powertrain.

When you’re not using the F-150’s battery to drive the truck, you can draw on its electricity to power accessories and small appliances through 11 outlets. Equip your truck and home properly and Ford says you’ll even be able to use the Lightning to power your home like a generator.

Ford’s first-ever electric F-150 has a beefed-up frame to handle the weight of the battery, and an independent rear suspension – another F-150 first – that the company says will improve the truck’s ride and handling.

At the end of this year, the Toyota/Lexus plant in Cambridge, Ontario will begin building the second-generation Lexus NX, making that factory the first outside of Japan to build the luxury compact crossover.

The NX’s new design improves on the first-gen model with a less busy-looking exterior and a dashboard that looks a lot more user-friendly and does away with Lexus’s unloved remote touch interface infotainment system. Instead, you get a choice of 9.8- and 14.0-inch touchscreens (depending on trim) with physical knobs for the A/C system and radio volume.

Lexus also doubles the NX’s powertrain offerings to a total of four with the addition of a plug-in hybrid (PHEV) powertrain and a 2.4L turbocharged engine.

The plug-in setup comes in the NX 450h+, and while Lexus doesn’t say how much power its gas engine and electric motor will generate, the company claims it will provide 58 km of electric driving and do the 0-100 km/h sprint in 6.2 seconds.

As in the current NX, the next-gen model will offer a conventional hybrid option in the NX 350h, its 239 hp a nice improvement over the 194 hp in today’s NX 300h.

With production of the 2022 Lexus NX set to begin in the fourth quarter of 2021, look for the new model to arrive in Canadian dealerships at the end of this year or in early 2022.