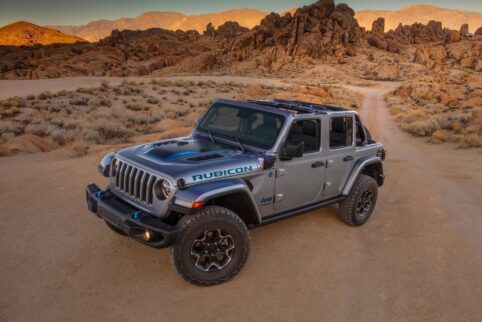 As electrified vehicles continue to make headlines, automakers are keen to capitalize on the technology’s growing popularity. As a result, the 2021 model year will see a number of popular models adopt hybrid power for the first time.

These new hybrids include something for just about everyone, so if you’re curious about the fuel-saving potential of electric power, here are the latest hybrid vehicles you’ll be able to buy in 2021.

The new configuration gives Ford the only full hybrid pickup on the market today. While that means the truck can run on electricity only for short distances, the battery and electric motor are really there to boost performance. The hybrid components add 30 hp and 70 lb-ft of torque to the F-150’s 3.5L turbocharged Ecoboost V6, for totals of 430 hp and 570 lb-ft. According to Ford, that’s more torque than any other F-150 has ever offered.

When the truck is parked, you can use the hybrid battery to power tools and other accessories.

Ford offers the F-150’s new hybrid powertrain in the truck’s full range of trim levels with pricing that starts in the mid-$40,000 range.

Toyota hopes it can spark renewed interest in the minivan segment with its latest Sienna, which went on sale in November 2020. It’s the brand’s first hybrid minivan and its latest model offered only with hybrid power.

Under the Sienna’s hood is a 2.5L four-cylinder engine, which gets help from an electric motor to make 245 hp. Front-wheel drive is standard, while an optional AWD system places a second motor at the rear wheels to improve traction.

Jeep will make its high-profile hybrid debut in early 2021 with the Wrangler 4xe, a plug-in hybrid (PHEV) version of the venerable Wrangler off-roader.

Plug-in power won’t come cheap: the gas-electric powertrain will cost $54,995 when installed in the Sahara trim level and $59,995 in the more rugged Rubicon trim.

Jeep promises 40 km of electric driving on a full charge of the 17-kWh battery pack. In theory, that’s enough to cover the 35-km-long Rubicon Trail in the Sierra Nevada mountains without burning any gasoline, if you’re able to get a charge in before you set off.

The Wrangler 4xe’s electric drive system works with a 2.0L turbo four-cylinder to make 375 hp and 470 lb-ft of torque. An eight-speed automatic transmission and 4WD are standard, and Jeep says this little SUV will do 0-60 mph (97 km/h) in about 6.5 seconds.

For 2021, Kia will roll out a new generation of its Sorento mid-range SUV, of which the highlights will be two hybrid options.

In the regular Sorento Hybrid, a 1.6L turbocharged engine and an electric motor will drive a six-speed transmission with 226 hp. This powertrain will also provide standard AWD traction.

Following the Sorento Hybrid’s official debut early in 2021, Kia will add a plug-in hybrid (PHEV) version. It will use the same gas engine but get a larger battery and electric motor for up to 48 km of electric driving on a full charge.

Kia will also offer the Sorento’s first off-road focused model, the X-Line. It will boast more ground clearance, a more sophisticated AWD system with a snow driving mode, and a stronger roof rack.

Hyundai has restyled its Santa Fe mid-size crossover for 2021, an update that also includes a new gas-electric hybrid powertrain, the first ever for this popular model.

Central to the Santa Fe Hybrid is a powertrain comprising a 1.6L turbocharged four-cylinder engine that works with electricity to provide 225 hp and 195 lb-ft of torque, and standard AWD.

The basic hybrid model will arrive in the first quarter of 2021, and it will be followed by a more advanced plug-in hybrid (PHEV) that will provide some battery-only driving capability.

Among the Santa Fe’s available features will be quilted leather upholstery, a 10.25-inch touchscreen, head-up display, and upscale interior accents.

Hyundai’s other new hybrid will appear in early 2021 in the Elantra compact sedan. When it arrives, it will be priced to start at less than $25,000 and be powered by a six-speed dual-clutch transmission and a 1.6L engine.

Hyundai hadn’t released many more details as of this writing, but the entry-level 2021 Elantra will get upgrades like a standard 8.0-inch touchscreen, wireless smartphone integration, and a rear occupant alert safety feature. Available features will include a 10.25-inch infotainment screen, ambient interior lighting, ventilated seats, a digital gauge cluster, and wireless smartphone charging.