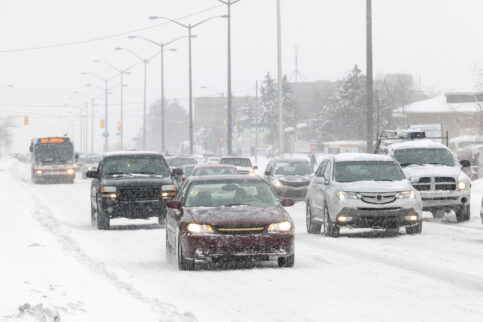 Each driver on the road takes a slightly different amount of time to react to an accident. Age plays a role, but so do many more things. For example, did you know that listening to your favourite Top 40 songs can slow down your driver reaction time? In this blog post, we’ll explain how to calculate a safe driving distance.

Factors That Can Affect Your Reaction Time

The Ministry of Transportation in Ontario recommends that you allow at least two seconds’ space between you and the vehicle in front of you so you can brake immediately if needed. However, two seconds is only a guideline. The following list, though not exhaustive, includes factors that can slow down your reaction time:

Do your best to improve these factors wherever possible. Some, such as reducing the volume of your music or asking passengers to speak quieter, are easy fixes.

Others, such as medication side effects and your level of fitness, cannot be fixed immediately but should be addressed. If your medication affects your mental alertness, talk to your doctor. If your fitness levels have decreased over the years, consider modifications to your vehicle and exercise at home to improve your body’s ability to handle driving. Our bodies and health change considerably from those early years of driving.

The Role of Speed

Speed also contributes to the likelihood of a crash. It isn’t rocket science: the slower you’re driving, the more time you’ll have to react to a potential accident. In my hometown of Kitchener, city council began an experiment last year, where they reduced the speed limit in several neighbourhoods from 50 km/h to 40 km/h. In November that same year, school zone speeds were reduced from 40 km/h to 30 km/h. Results haven’t been published yet, but the city began the experiment because other cities were doing it, too.

How to Calculate a Safe Distance

According to the Driver’s Handbook published by the Ministry of Transportation in Ontario, the easiest way to calculate a two-second driving distance is to take the following steps:

The MTO offers a few words of caution: two seconds is sufficient in regular driving conditions. Some situations, such as bad weather, following a transport truck, or carrying a heavy load require a larger distance. In addition, do not block the normal and reasonable movement of traffic.

Don’t be afraid to turn down an opportunity to drive if you don’t feel safe behind the wheel. Some drivers eventually stop driving at night. Others stick to city streets. But no matter where you drive, always keep a safe distance between you and the vehicle in front of you.