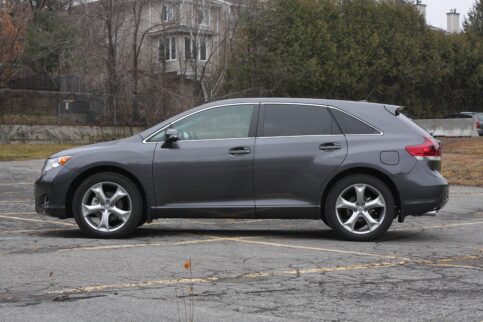 The mid-size crossover segment is one of the most varied vehicle categories in the marketplace. It starts with five-seat models about the size of a family sedan and stretches to seven- and eight-seaters that approach full-size territory.

That makes a lot of sense: Families come in a lot of different sizes, so the vehicles built to appeal to family drivers should, too.

Today, however, we’re looking at the entry-level end of the mid-size class to find the most fuel-efficient options among five-year-old (2016) models. That means five seats in true mid-sized models powered by four-cylinder engines and, in most cases, front-wheel drive. If you’re looking for a roomy family vehicle on a budget, the five vehicles listed below are a good starting point.

While our earlier list of fuel-efficient used compact crossovers consisted entirely of Japanese models, this compilation of mid-size models offers more variety. Two of the vehicles are Japanese, two more are from South Korea, and one is from an American brand.

This was the second year for the fifth-generation Subaru Outback, whose clean styling surrounded mechanical components carried over from the previous design.

Notably, the Outback (like most Subaru models) is the only one on this list that came standard with all-wheel drive. Typically, AWD reduces fuel economy, but the Outback is significantly more efficient than any of its front-wheel drive competitors.

The thriftiest Outback configuration paired a 2.5L four-cylinder engine (175 hp/174 lb-ft of torque) with a continuously variable automatic transmission (CVT). Subaru also offered a six-speed manual in the 2016 Outback, but it’s not as efficient.

Ford also offered the Edge’s most fuel-efficient powertrain – which includes front-wheel drive – in a range of trims. Its 2.0L turbocharged four-cylinder (245 hp/270 lb-ft) and six-speed automatic could be had in SE, SEL and Titanium trims. The Edge boasts the most performance of any of the thrifty vehicles on this list.

This was a good year for value-seeking Ford shoppers: In 2016, the Edge gained passive keyless entry as standard and boasted a quieter interior, thanks to a laminated windshield.

The Kia Sorento was all-new in 2016, moving into a third generation notable for interior quality that rivalled more expensive SUVs.

Kia’s most efficient configuration matched a 2.4L four-cylinder engine (185 hp/178 lb-ft) with a six-speed automatic and front-wheel drive. The Sorento was not strictly a five-seater, but the three-row interior was only offered in conjunction with AWD and more powerful engines.

The 2.4L/FWD powertrain came only in the entry-grade LX trim. It was reasonably well-equipped for a base model, with alloy wheels, auto on/off headlights, fog lights, heated side mirrors, a front wiper de-icer, heated front seats, and backup sensors. However, you’re out of luck if you want any of the Sorento’s many upscale options.

In 2016, the Hyundai Santa Fe was midway through its third generation’s run, which began in 2013. The Santa Fe shares a lot of its underpinnings with the Kia Sorento, so this mid-size Hyundai utility uses the same 2.4L four-cylinder engine (tuned for a bit more power – 190 hp and 181 lb-ft) matched with a six-speed auto and front-wheel drive. Despite the similarities, the Santa Fe Sport is less fuel-efficient than the Sorento.

The 2016 model year was the last for the first-generation Toyota Venza, which then went on hiatus until its reintroduction this year as a hybrid. The most efficient 2016 version came with a 2.7L four-cylinder engine (182 hp/182 lb-ft), front-wheel drive, and a six-speed transmission.

Toyota presented the Venza as an upscale choice in the mid-size crossover segment, fitting it with standard items like 19-inch wheels, dual-zone A/C, and woodgrain dash trim. Other features in the base trim included an auto-dimming mirror, heated side mirrors, and a 6.1-inch touchscreen. Heated front seats and leather upholstery were available as options.