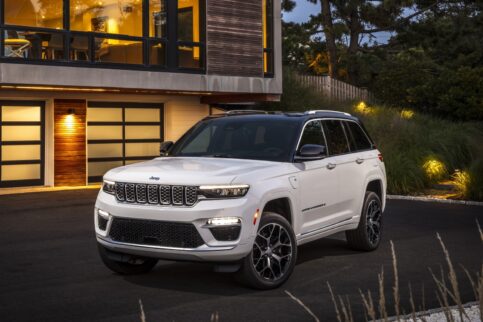 January was a big month for big SUVs, with automakers revealing redesigned or updated versions of some of their largest utility models.

Jeep revealed the first-ever plug-in hybrid Grand Cherokee (the brand’s second plug-in model), Toyota has done a ground-up redesign of its Sequoia full-size SUV, and Ford is preparing to launch a high-performance Raptor variant of its retro-styled Bronco SUV.

And at the beginning of January, NACTOY (North American Car and Truck of the Year) named the winners of its annual awards for the continent’s best car, truck and SUV models.

On January 27, Jeep announced the first-ever plug-in Grand Cherokee will be priced at $74,995 to start when it goes on sale this spring.

The Jeep Grand Cherokee 4xe is a plug-in hybrid that will promise 40 km of EV driving on a full charge of its battery. When that runs out, a 2.0L turbo four-cylinder engine will work with the 4xe’s two electric motors to make 375 hp and 470 lb-ft of torque – more power than the regular Grand Cherokee’s available 5.7L V8.

Toyota’s big news in January was the unveiling of an all-new Sequoia full-size three-row SUV, marking the model’s first significant redesign since 2007.

Like the outgoing Sequoia, the new one is based on a platform shared with the recently redesigned Toyota Tundra pickup, and that is where the Sequoia’s standard hybrid powertrain comes from. A 3.5L turbo V6 engine is matched with an electric motor and a 10-speed transmission to generate 437 hp and 583 lb-ft of torque, way up from the 381 hp/401 lb-ft made by the outgoing Sequoia’s 5.7L V8.

Technology and convenience options include a 14.0-inch touchscreen, ventilated front and second-row seats, and a 14-speaker stereo. A new Capstone trim level will be the Sequoia’s new flagship.

The new Sequoia’s third-row seat slides fore and aft to favour either legroom or cargo space, and there’s a multi-position cargo shelf that fits behind the rear seat to add some flexibility when you’re transporting a full load of passengers.

The 2023 Toyota Sequoia is scheduled to go on sale this summer, with pricing and other information to come around the same time.

This summer, Ford’s Bronco lineup will get a shot of adrenaline with the addition of a 400-hp Raptor variant.

The Bronco Raptor will get its motivation from a 3.0L turbocharged V6 that Ford says will be tuned for more than 400 horsepower, but the company hasn’t revealed what its final output will be. The current Bronco’s engine options are a 275-hp turbo four-cylinder and a turbo 2.7L V6 making 315 hp.

But the Bronco Raptor will boast more than just a bigger engine. It will be built on a stronger frame and suspension mounting points made to stand up to more aggressive off-road driving, along with upgraded axles and a sophisticated long-travel suspension with semi-active dampers.

Ford will fit the Bronco Raptor with marine-grade vinyl seats, and carpeted flooring will be optional.

Watch for Ford to start taking orders for the Bronco Raptor in March, with deliveries to begin this summer. Pricing and other info will come closer to the Raptor’s arrival.

On January 11, auto reviewers from across North America voted on the vehicles they deemed worthy of the 2022 North American Car, Truck and Utility of the Year (NACTOY) awards, and named the Honda Civic, Ford Maverick, and Ford Bronco this year’s winners.

The all-new 2022 Honda Civic beat out the Volkswagen Golf GTI/Golf R and Lucid Air to take the Car of the Year prize, acknowledging the new design’s overall competence and the Civic’s ongoing dominance in the compact car segment.

Ford’s new Maverick compact pickup was named Truck of the Year as a nod to its helping create a new class of small pickup that has been missing from the auto industry since the late 2000s. It beat out the Hyundai Santa Cruz — another new compact pickup – and the Rivian R1T, an electric truck that was one of the first battery-powered pickups to reach the marketplace.

Ford also picked up the top prize in the Utility of the Year category with its Bronco SUV, a mid-size model that challenges the Jeep Wrangler in the off-road segment. The Bronco garnered more votes than the Hyundai Ioniq 5 crossover EV and the Genesis GV70 compact luxury crossover.