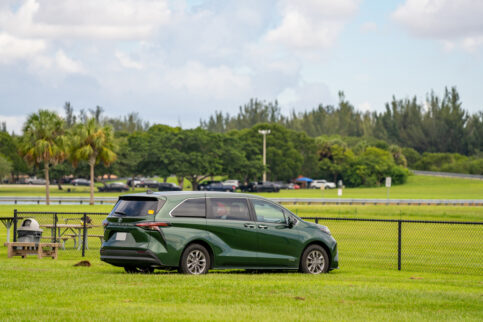 Ever since the minivan’s popularity peaked in the early 2000s, we’ve seen a downward trend in the purchasing and manufacturing of these family-style vehicles in favour of the cooler-looking family SUVs. Let’s face it: minivans are not the most attractive vehicle on the market. But when buying a vehicle for the family, appearance takes a backseat to the most important feature: practicality. And that’s where the family minivan surpasses the SUV in meeting almost every family need in a vehicle.

Minivan storage is nearly unrivalled on the market of family-friendly vehicles. With their low floors, a minivan can offer approximately 31 cubic feet of space behind the third row of seats, while most SUVs have around 20 cubic feet.

A minivan’s storage can also grow. Many current family minivans include a removable or stowable seat feature that can easily increase storage space to at least 81 cubic feet. The 2014 and 2016 Chrysler Town and Country models feature Stow ‘N Go seats and boast an impressive 148.3 cubic feet of space behind the first row of seats.

While SUVs are popular for families partly because of their higher ground clearance, that ground clearance comes with a few sacrifices. One is passenger space: family SUVs can offer less comfort, especially in the third row of seats.

The lower ground clearance in family minivans, on the other hand, allows them on average, about five more inches (12.5 cm) of leg room in the third row. No feeling like you’ve been packed in like a can of sardines back there! A seven-passenger minivan model also features two captain’s chairs as the middle seats, instead of a bench, allowing for a roomier ride.

The bonus: All that space afforded by a family minivan comes in especially handy on long road trips.

Both family SUVs and minivans are not the most fuel-efficient vehicle on the market because of their size, but there are significant differences between their general fuel economy.

Unlike SUVs, minivans use sliding rear doors. These doors make entering the vehicle easier and, combined with the lower step to get into the van, much more accessible for all ages.

Sliding rear doors also eliminate some safety fears for parents, as the doors are less likely to close on unsuspecting fingers when fully opened. Also, when you’ve parked the minivan on a hill or you open the door on a windy day, the sliding door won’t close on you when you’re struggling to put children or cargo into the back.

Minivans, unlike SUVs, are designed with families in mind. Therefore, they have an abundance of power outlets, USB ports, cup holders, and storage spaces. Many also feature a rear entertainment system and, depending on the model, have additional features a family may find useful, like cooled storage compartments, built-in vacuum cleaners, and rear-seat reminder system.