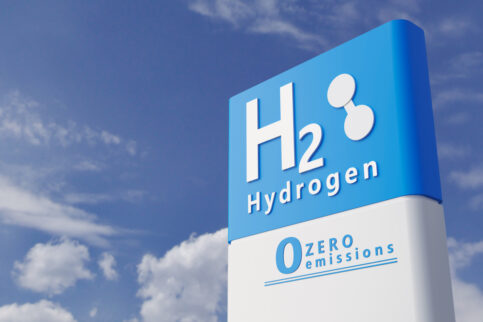 Electric vehicles (EVs) are changing the automotive landscape. The power and quietness truly make EVs a joy to drive. The biggest problem with them, though, is range anxiety, i.e., the worry that the battery will run out before the driver can find a charging station. Moreover, people dislike that EVs take over an hour to charge. These factors combined make them impractical for long-distance car rides or commutes that don’t offer charging stations along the route. The solution? Hydrogen vehicles, “plug-less” EVs.

An EV You Don’t Have to Plug In

But what actually happens? Hydrogen gas is stored in a tank; it’s mixed with oxygen inside the fuel cell stack, where its protons and electrons are separated. The electrons power the electric motor and other accessories you have in the vehicle. After the separation, the hydrogen molecules are re-introduced to oxygen, where they bind to form water, one of two by-products of a hydrogen vehicle. The other is heat.

Imagine driving a vehicle that is environmentally friendly and only takes a few minutes to fill. FCEVs are the way to go if those are your goals. FCEVs have all the power of EVs without sacrificing cargo space.

Hydrogen gas is relatively easy to find if you live in the areas of the world that offer these vehicles: it’s as simple as going to the gas station, because participating gas stations will have a hydrogen pump on the property. The process of filling your FCEV is similar to getting gas: in a matter of minutes, you could fill your FCEV’s tank, giving you about 500 km of range.

Toyota began developing hydrogen fuel cell vehicles in 1992. In 2001, the FCHV, a Highlander-based hydrogen vehicle, was shown at the Tokyo Motor Show. One year later, the SUV was available for limited sales in the U.S. and Japan.

The Toyota Mirai was unveiled in November 2014 at the LA Auto Show. It is one of the first FCEVs to be mass-produced. It takes its name from the Japanese word for future, because Toyota believes that hydrogen is the future of automobiles.

Toyota built the Mirai as an FCEV model instead of converting a gas model. In the first four years, until December 2019, Toyota sold 10,250 Mirais. Its starting price is $73,870 without any dealer discounts or incentives from the government.

Hyundai Motor Company’s current FCEV is the Nexo. It has been on sale since 2019. It was revealed in January 2018 as a successor to the Hyundai Tucson FCEV. The Nexo was built from the ground up to be an FCEV. It offers 570 km of range on each tank of hydrogen. The Hyundai Nexo sneaks in below the Mirai at $71,000. Hyundai has been working on fuel cell technology since the introduction of the Santa Fe FCEV in 2000. The Nexo is Hyundai’s fourth generation FCEV.

More Than a Step up from Hybrids

A lot of people are looking for a vehicle that is environmentally conscious, but they fear the range anxiety that comes with an EV. Hybrid vehicles are great, but they still burn gas, and they are not very efficient by comparison. Hydrogen fuel cell vehicles are the best option for green families. Offering the ability to fill in a few minutes as well as drive long ranges, hydrogen cars offer a great alternative to strictly electric vehicles.