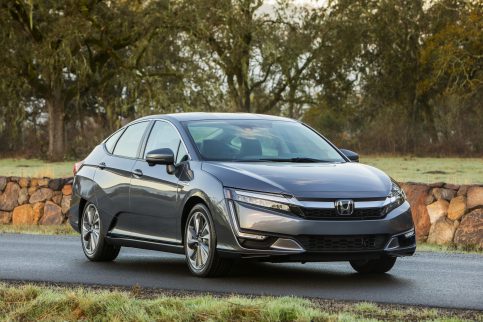 Introduced in 2018, the Clarity is Honda’s first standalone plug-in hybrid (PHEV) model. It’s the third member of Honda’s current electrified-vehicle lineup, which also includes the Accord and Insight hybrids.

The Clarity borrows its name from a low-volume Honda hydrogen fuel cell car never sold in Canada. Conceptually, it succeeds a plug-in hybrid version of the ninth-generation Accord that Honda also never made widely available in Canada, making this Honda’s first mainstream plug-in model for this country.

The Honda Clarity’s styling is polarizing, but there are reasons for it. Much of what you see on the Clarity’s body is there for aerodynamics.

My only practical complaint is that this looks like a hatchback, but isn’t one. There’s a large trunk, but that seems like a missed opportunity to better differentiate the Clarity from the Accord and Insight.

To increase visibility over the high trunk, there’s a secondary window built into the trunk lid. It’s better than nothing but annoyingly bisects the rearward view.

Otherwise, the Clarity is a roomy car, and the cabin is nicely finished. Curiosities include manual driver’s seat adjustments and no heated steering wheel, even at my Touring test car’s $44,000 price. 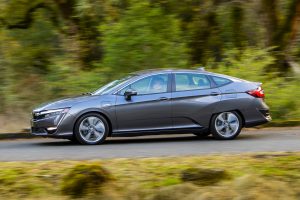 Real-world driving yielded a range of 65 to 70 km on a charge. Even without access to 240-volt charging (which will replenish the battery in 2.5 hours, compared to 12 hours on a standard 120-volt outlet), I used so little fuel in a week of driving that I didn’t have to fill the tank before I gave the car back.

The Clarity’s 26.5L gas tank is tiny, but should be good for at least 400 km with the car running in hybrid mode. Still, that limits the car’s long-distance potential on drives when you don’t have time to put a full charge in the battery.

The Clarity makes a good impression on the road. There’s 212 hp on tap from the powertrain, but 232 lb-ft of torque tells a stronger story. The Clarity is surprisingly quick and satisfying to drive, the sensation of speed enhanced by nearly silent performance in all-electric mode.

When the gas engine comes on at the end of your battery’s charge, you’ll feel rather than hear it. At full throttle, the soundtrack is more like that of a conventional car, but it quiets down in normal driving.

Honda doesn’t build true one-pedal driving into the Clarity. In other PHEV and electric cars, that function dials the regenerative braking way up so that the car will decelerate aggressively when you lift off the accelerator. The Clarity allows you to adjust how much regen braking happens, but you’ll still need to use the brake pedal more than in other PHEVs.

Every time you start the Clarity, it defaults to EV mode to use electricity as much as possible. There’s also a sport mode for more immediate acceleration, and an HV button uses the gas engine to drive the car and charge the battery. That’s useful in highway driving, where the gas engine’s efficiency is at its best and you can save up some juice for future city driving.

Curiously, for such a high-tech car, the Clarity doesn’t offer blind-spot/rear cross-traffic monitoring or 360-degree exterior camera views, features available in a number of less-expensive cars.

My test car was the Clarity Touring, which added navigation, leather seating, satellite radio, and an integrated garage-door opener. As I write this, Honda hasn’t announced 2020 Clarity pricing, but the 2019 mode

Where I start to question the Clarity’s value is when comparing it to some entry-level fully-electric cars. At just under $46,000, the Hyundai Kona Electric Preferred trim is smaller, but promises 415 km from its battery powertrain and includes the blind spot/cross-traffic system missing from the Clarity Touring.

I could live with the Clarity’s function-over-form styling. However, high-tech equipment is a big draw in the hybrid and electric car segment, and the lack of now-commonplace driver assists stands out for my test car’s $44,000-plus price.

The Honda Clarity is one of the best plug-in hybrid cars on the market right now for its combination of useful electric driving range and an overall upscale feel. It’s what the Clarity doesn’t have that hurts it.