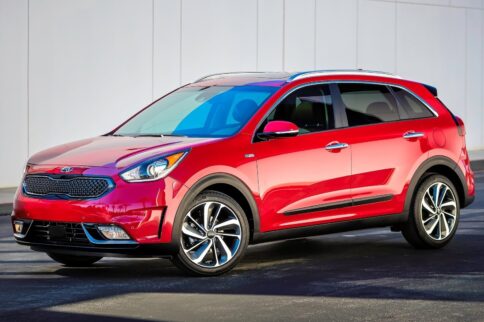 Of all the technologies automakers have come up with to help drivers save on fuel costs, nothing works as well as a gas-electric hybrid powertrain. A conventional hybrid whose battery is charged solely through regenerative braking is a more affordable route to fuel savings than a plug-in hybrid or pure electric vehicle, which are more expensive to buy and make the most sense if you can have a charge point installed at your home.

Since the Toyota Prius’s arrival in Canada more than 20 years ago, it has set the tone for the gas-electric hybrid marketplace with its sophisticated powertrain and strong reliability.

More recently, Korea’s Hyundai and Kia have made a major push into electrified vehicle segments. From those brands come the Ioniq and Niro, respectively, which share some drivetrain technology but wrap it up in distinct body styles.

If Ontario’s gas prices – which climbed rapidly in early March – have you looking for an easy way to cut your fuel costs, consider one of these used compact hybrid hatchbacks.

The Ioniq was Hyundai’s first dedicated electrified vehicle line, which included plug-in hybrid and fully electric versions in addition to the conventional hybrid model we’re discussing here. Its performance comes from a 1.6L gas engine and an electric motor, which generate 139 hp and 195 lb-ft of torque.

In this thread, Ioniq owners discuss overfilled engine oil, a topic we’ll revisit below in the Kia Niro section of this article.

If an Ioniq flashes a “check hybrid system” message, the car could need a software update for its electronic drivetrain controls. Meanwhile, a handful of owners say they’ve had to have faulty electric drive motors replaced in their cars. Here’s a discussion that demonstrates a potential link between these two issues.

If you do your test drive on a hot day, try out the A/C to make sure it blows cold.

Watch out for a tailgate that will refuse to open if it doesn’t latch properly when closed. Some owners also complain of a rattling sound from the hatch when the car is driven over rough roads.

Toyota rolled out the fourth generation of its Prius hybrid in 2016 with a more aggressive-looking design and a weight reduction that improved its fuel economy. The Prius’s 1.8L gas engine and electric motor work together to make 121 hp, managed by a continuously variable transmission (CVT). In 2019, Toyota added an AWD option to the Prius that drives the rear wheels with electricity.

If you’re test-driving a Prius on a hot day, run the A/C to make sure it pumps out consistently cold air. Some Prius owners say their cars’ air conditioners run hot and cold; in one case, the culprit was a low refrigerant level, while another owner’s problem seemed to be related to the A/C’s air recirculation setting.

If an ominous-sounding “traction battery maintenance” warning pops up on the dash, it’s probably triggered by a battery cooling system air filter that needs to be replaced.

Some fourth-generation Prius models came equipped with Toyota’s Safety Sense suite of driver assists. During your test drive, watch for any safety-related warnings in the central dash display, which could indicate one or more faults in the system. You may also wish to test the car’s adaptive cruise control to make sure it maintains the set speed and distance from the car in front.

Finally, take a close look at the steering wheel for any signs of peeling in the leather trim, and spend some time using the infotainment touchscreen to make sure it works as advertised.

Kia introduced the Niro Hybrid in 2017 as the entry-level version of a car that also came with plug-in hybrid and pure electric powertrains. Hybrid models use a 1.6L four-cylinder engine and an electric motor that put 139 hp and 195 lb-ft of torque through a six-speed automatic transmission.

When test-driving a Niro, pay attention to the transmission’s performance. Some drivers have complained of a jerking or stuttering sensation, which this owner says is bad enough to make the car uncomfortable to drive.

This Niro owner says their car shut down while driving, and the dealer told them it was caused by a blown high-voltage fuse. Finally, check the Niro’s engine oil level before you embark on your test drive. Some owners say the oil level actually increases over time, a phenomenon that, in this case, was accompanied by the smell of gasoline on the dipstick. Gasoline – or any other contaminant – in the oil reduces the oil’s ability to protect the engine and could lead to mechanical problems. If the oil level is high in the car you’re looking at, it might be best to keep shopping around.