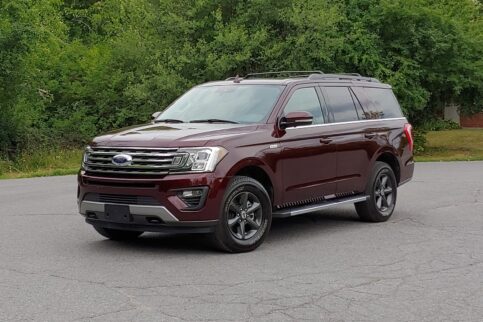 As you’ve seen in our previous fuel economy comparison articles, engine technology has done a lot to improve fuel efficiency in all sorts of vehicles, from compact sedans to pickup trucks.

In this article, we’ll look at fuel economy in the full-size SUV segment, where domestic and Japanese automakers pair truck-like capability with the flexibility of three-row seating. Among the competitors in this comparison are General Motors’ quartet of the Chevrolet Tahoe and Suburban and the nearly identical GMC Yukon and Yukon XL, the Ford Expedition, Nissan Armada, and Toyota Sequoia.

These large SUV models have a couple of things in common: All come standard with V8 power, and they all share at least some of their underpinnings with full-size pickup trucks. Let’s take a look at how full-size SUV fuel economy has changed over the last 10 years.

At first glance, not much has changed under the hoods of Chevrolet’s large Tahoe and extra-large Suburban, and their GMC analogs, the Yukon and Yukon XL, in the last decade. All of these trucks, new and old, are powered by 5.3L V8 engines.

However, the new trucks are more powerful, and their engines are backed up by a 10-speed transmission in place of the older versions’ 6-speed.

Ten years of evolution hasn’t yielded much of an actual improvement in fuel economy. In fact, the new trucks are actually less efficient in highway driving, and their combined rating of 14.0 L/100 km is worse than the 2012 models’ 13.8 L/100 km estimate.

For maximum efficiency in the 2022 Tahoe, Suburban, and Yukon, choose the available 3.0L turbodiesel six-cylinder, whose ratings are 11.0/8.7 L/100 km in 2WD models. There was no diesel available in 2012, but Chevrolet and GMC did offer a gas-electric hybrid setup whose ratings were 11.5/9.9 L/100 km. It was a well-done powertrain but didn’t sell well, and is hard to find on the used market.

Of all the trucks we’re comparing here, none has enjoyed as significant a mechanical evolution over the past decade as the Ford Expedition.

In 2012, the Expedition used a 5.4L V8, but it has since adopted Ford’s 3.5L Ecoboost turbocharged V6, which in the 2022 model makes 23 percent more horsepower and 29 percent more torque in this SUV’s base trims (a top-end Platinum version gets a small bump in power). It also comes hooked up to a 10-speed transmission which contributes to a major improvement in fuel economy.

Japanese automakers have a reputation for making some of the most fuel-efficient vehicles in the auto industry, but the last two SUVs we’ll cover in this article prove there’s at least one exception to every rule.

Both the 2012 and 2022 versions of Nissan’s largest SUV use 5.6L V8 engines, with the newer version boasting nearly a third more horsepower. The 2022 model’s direct fuel injection system contributes to its extra output and better fuel economy.

Still, the 2022 Armada’s fuel consumption figures are the second-highest of any of the 2022 models covered here, and higher than those of the 2012 Chevrolet and GMC models.

If Japan’s auto industry is a leader in fuel efficiency, then it may surprise you – as it did us – that the 2022 Toyota Sequoia has the worst fuel economy of any full-size mainstream SUV. Its fuel consumption ratings are also the second-highest of any vehicle we’ve covered here, regardless of the model year.

The negligible difference between fuel consumption estimates for the 2012 and 2022 versions of the Sequoia is due to the fact that they are essentially the same vehicle: 2022 is the final year for the second-generation Sequoia, which Toyota introduced in 2008.

Toyota used to offer the Sequoia with two engines, the lesser one a 4.6L V8 that was discontinued after 2012. That year’s optional 5.7L is the only one you can get in a 2022 model, which is why we used it for our comparison. For 2023, Toyota has redesigned the Sequoia into its third generation, whose standard hybrid powertrain is built around a 3.5L turbocharged V6. The company hadn’t revealed fuel consumption estimates at the time we wrote this article, but promises a “huge improvement” in fuel economy over the previous generation.