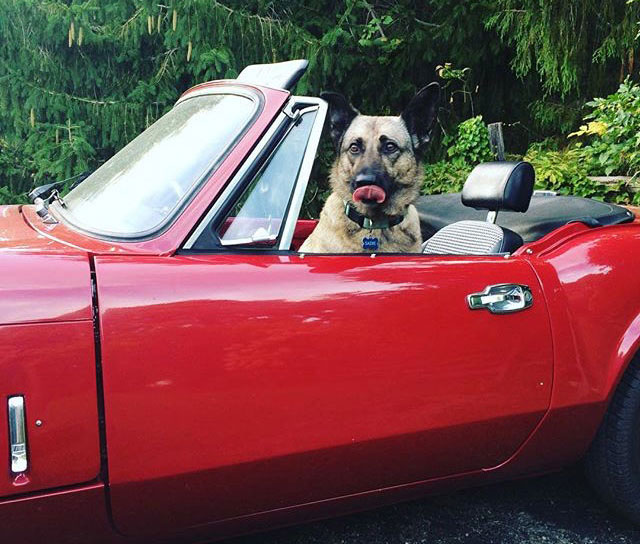 March 23 was National Puppy Day, and it prompted the OPP to tweet this that day: “Over 9,000 collisions linked to an inattentive driver on #OPP-patrolled roads last year proving that #DistractedDriving is dangerous. Do your part by securing your pets when traveling to avoid distraction #NationalPuppyDay.”

If your dog drives with you unsecured, you’re not alone. Last year, Volvo US conducted a national study of 2,000 American dog owners and found that 97% of pet owners drive with their dogs, but many of them do so unsafely:

Only 5% of pet owners who drive with their dogs have a built-in pet safety system installed.

Dog Restraints for the Car

If you’re not among those 5% of owners, you need to understand that neither you nor your dog are safe in the case of a crash. I’ve already written about how children’s toys can become projectiles in a crash. Dogs can also become projectiles. And once they’re injured, they can become dangerous to anyone in the car and to rescue crews.

The Center for Pet Safety, an American non-profit, tests dog harnesses, crates, and carriers. If you drive with your dog, consider reviewing their list of certified products. It may at first seem unlikely that anything could happen to your dog, but just watch the first dog-harness test. The video lasts only about two minutes and uses slow-motion video and dramatic music, but I watched the harness straps break and the test dummy fly head-first onto the floor. I’m not a dog person and it still upset me.

Buying just any harness, crate, or carrier won’t do. The CPS tested several crates and carriers in 2015 and two harnesses in 2018 as part of their certification process. It noticed that even those whose labels stated they had been tested did not pass standard crash tests.

Some crates, for example, had weak locks that broke upon impact, sending the door swinging inwards, toward the test dog. The testers wrote this in the report for one such crate: “The door could not be opened and required extra force to open and release the test dog.”

The OPP statistic I opened this post with is only for OPP-patrolled roads. And certainly not all 9,000 distracted driving accidents resulted from pets in vehicles. However, if you’re like the 67% of respondents in the Volvo survey who considered their pet a member of their family, then treat your pet with the same rules. Just like you and your family have to wear seatbelts, so should your pets be appropriately restrained. When driving with your dog, put safety ahead of your dog’s preferences.

*Sadie was adopted by a member of our staff after she was found roaming the streets of Toronto. Sadie has a zest for life, loves playing with other dogs, and doesn’t pass up an opportunity for a car ride.