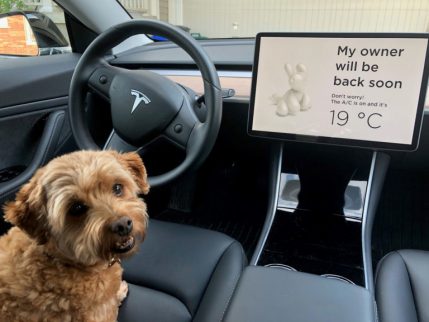 We’ve been saying “summer’s just around the corner” in Ontario for a while now, and although the weather has been cooler than usual, it’s never too early to talk about dogs in cars. One company that has reached the finish line first on that issue is Tesla, who announced a Tesla Dog Mode in February.

The Problem: Leaving Dogs in Cars

Leaving pets in cars when the weather outside is too hot or cold for them to survive in a poorly insulated vehicle sadly makes the news every year. On July 23, 2018, Stephanie Skinner, of Victoria, B.C., allegedly left her Boston terrier in her car for seven hours. She was charged under the animal cruelty act and could face up to two years in prison and a fine of $75,000. She may also be banned from owning pets. (She’s scheduled for arraignment June 13, 2019.)

It may be tempting to leave the animal in the car with the windows open a tad for “just a few minutes,” but it doesn’t take much for heat to seriously affect or even kill your family dog. The SPCA of Ontario says that dogs cannot sweat much to cool themselves down. A dog’s normal body temperature is 39˚C, “and a temperature of 41˚C can be withstood only for a very short time before irreparable brain damage or even death can occur,” the SPCA’s website says.

This feature allows the driver to keep the air or heat running while the dog is alone in the car. To help save windshields, it also as a message on its centre display that tells passersby the animals are comfortable and the interior environment is safe. Elon Musk also explained in February that this feature comes in addition to Tesla’s Cabin Overheat Protection, which activates automatically in high temperatures and was released in 2016.

How to Enable Tesla Dog Mode

This feature is available in Model S, Model X, and Model 3, and it’s easy to use. Once you’ve parked your car, tap the fan icon at the bottom of your display. Set “Keep Climate On” to “Dog,” and adjust the temperature using the arrows. That’s it.

If You Don’t Own a Tesla

The price tag on Teslas means many can’t afford them. If that’s the case for you, then I can only offer the same advice as you’ve probably heard before. Cars heat up fast in the summer, even in the shade, and cool down too much in the winter. If you can’t take your pet into the building you’re going to, leave it at home. Not doing so means you risk not only broken windows from well-meaning passersby, but you may be charged under applicable laws within your province or state for neglecting your pet and/or causing suffering.

However, dog lovers are singing praises on social media for Tesla’s true innovation and for thinking of everyone in the car, not just humans. Even for someone like me, who’s not a dog lover, I can appreciate how much easier life has just become for dog owners and how many more dogs’ lives can be saved thanks to this innovation.