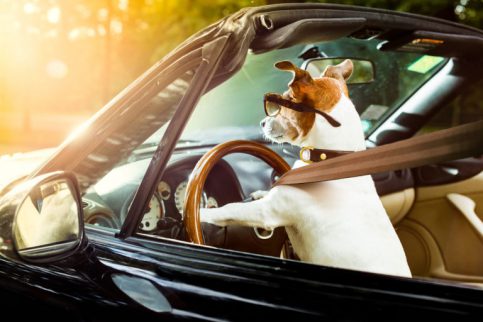 If my informal social media inquiries asking for comments on dog seat belts are any indication, dog seat belts still have a ways to go before they become popular. It’s as though there’s an unspoken belief that dogs will stay comfortably seated in the car during a crash while the rest of the car’s occupants get jostled around like rag dolls. Your dog should be restrained while driving, so please buy a seat belt for your dog, but walk carefully through this maze of products.

According to the SPCA of Ontario, there is no specific law that dictates how you must transport your pet. However, there are laws that can be enforced because they are related to your pet: driving with an insecure load (section 111(2) of the HTA), and careless driving (section 130). Pets are also covered  under the Standards of Care portion of the SPCA Act of Ontario, which discusses safe transportation of animals. “We put our pets and ourselves at risk of injury if we have them between us and the air bag, whether we are the d[r]iver or a passenger in the front seat,” the SPCA writes.

Read Reviews When Buying a Dog Seat Belt for Your Car

Treat reviews for dog seat belts like reviews for children’s car seats: safety first. You’re not investigating convenience options like you might for your next productivity software package. Instead, you’re trying to figure out how to keep you, your pet, and any other occupants in the car safe in case of a crash.

One website I visited reviewed 25 different dog seat belts, which sounds impressive. However, even its top pick didn’t explain crash test results. Instead, the top pick was chosen for its adjustability (to fit a variety of dogs), the inclusion of an elastic buffer, that the restraint was made from “durable nylon,” and that it had a two-year warranty. Any safety features described read more as reasons why you should buy your dog a seat belt to begin with. They did not specifically speak to that seat belt’s ability to keep your dog safe in a crash.

The Center for Pet Safety is an American nonprofit association that rates various restraints. Because each full crash test costs about $2,000 USD, the CPS first performs a strength test on the restraint. If the restraint survives five seconds at a certain load, then it moves on to crash test.

In their first year, the CPS bought 11 harnesses for their initial tests. Seven passed the strength test, and only one passed the crash test: Sleepypod Clickit Utility Harness.

The Cost of Dog Seat Belts

The top pick from that review website costs $20 CAD on Amazon. The Sleepypod Clickit Sport, one of only three (!) car restraints for dogs to receive the CPS’s approval costs between $91 and $117, depending on the size of harness. So, yes, there is a price difference. However, this is one case where you should consider paying the extra money.

If you have a dog, you love it. That goes without saying. But just as you would never allow a child to ride in your car without a seat belt, you should make sure you have your dog securely buckled down, too. However, investigate your options carefully: Many products out there may give you false hope.