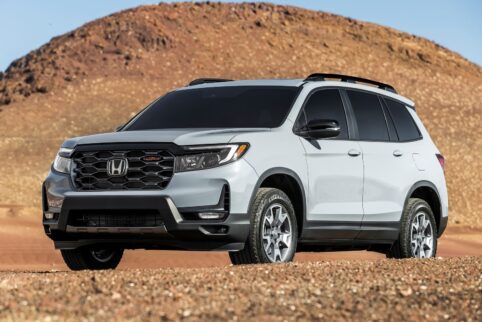 About a year ago, we wrote about a few crossovers – utility vehicles designed primarily for paved roads – that have functional tweaks to enhance their off-road abilities.

We’re still not sure if this is a short-lived trend or one that will persist as drivers demand more of a middle ground between basic crossovers and true off-roaders like the Jeep Wrangler and Ford Bronco.

For now, though, the sub-segment of crossovers with a rugged flavour has grown with the addition of this quintet of new 2022 and 2023 models.

Like its larger sibling, the compact Forester Wilderness is more than just a styling exercise. A taller suspension creates more ground clearance, and there are underbody skid plates to protect the car’s underpinnings if you get overly adventurous. A front-view camera gives you an up-close look of the ground before you drive over it, and all-terrain tires provide extra grip.

Meanwhile, the continuously variable transmission (CVT) gets specific gear ratios better suited to rough going, and a better oil cooler helps keep it chill in off-road driving and allowed Subaru to double the Forester’s normal towing capacity to 1,360 kg for the Wilderness trim.

Shortly after we published our first look at crossovers designed for off-roading, Ford announced a Timberline trim level for its Explorer mid-size SUV.

Like Subaru’s Wilderness package, the Explorer Timberline is more than just a tough-looking styling package. Sure, there are distinct grille and black trim elements, but Ford has also upgraded the Explorer’s steering and suspension with new springs, sway bars, and heavy-duty shocks borrowed from the truck’s Police Interceptor package. The chassis tweaks add 19 mm of ground clearance which, along with bumpers exclusive to the Timberline, lets the Explorer climb over taller obstacles without scraping.

There are steel skid plates to protect the Explorer’s major mechanical bits, and a limited-slip rear differential works with seven different drive modes to maximize traction. The Explorer Timberline’s power is from a 2.3L turbocharged four-cylinder engine (300 hp/310 lb-ft) and a 10-speed transmission.

The Hyundai Motor Group is ready to join the off-road crossover club with special trims for its Hyundai Palisade and Kia Telluride models.

Both of these big, three-row SUVs have been refreshed for the 2023 model year, and those updates include new more rugged (or rugged-looking) trim packages.

The Kia Telluride’s X-Pro package is the most significant of these, with an extra 10 mm of ground clearance, a tweaked traction control system, 18-inch wheels shod with chunkier tires, and some tougher cosmetic cues. Kia will also offer a milder X-Line option that gets the taller suspension and body add-ons but sticks with more pavement-ready 20-inch wheels and tires.

As of this writing, neither Kia nor Hyundai had released pricing for the updated 2023 versions of the Telluride and Palisade.

Honda’s most rugged crossover model is the Passport Trailsport, a new trim level for the 2022 version of the brand’s mid-size, five-seat utility.

The Passport Trailsport’s only mechanical change is a 10-mm wider track (the distance between the left- and right-side wheels), which promises more stability both on-road and off. Otherwise, there are unique bumpers with faux skid plates for the exterior and orange seat stitching in the cabin.

Honda kept the Trailsport’s changes simple to see how many buyers choose it over the Passport’s other trims. The company says it may expand the Trailsport package in the future with all-terrain tires and modified suspension if it senses demand for those additions. For now, the $49,270 Trailsport is the middle of three Passport packages, which also include the $45,570 Sport trim and a $52,170 Touring configuration.