Car Reviews and Tips » BEEP, BEEP! The Story of the Nash Rambler 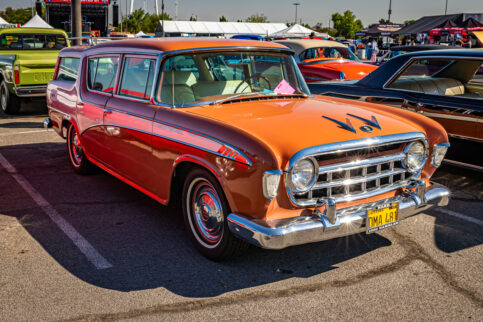 “Beep, Beep” by The Playmates

In 1958, Roulette Records release The Playmates’ novelty single entitled “Beep Beep” and made pop culture history. The song charted for 15 weeks on the 1958 Billboard charts, peaking at #4, and tells the story of two cars, a Cadillac and a Nash Rambler, as they appear to compete for speed on the road.

No one expected the song to become popular, nor did anyone expect it would boost the sales of the now long-discontinued Nash Rambler, helping it break records. But while the song certainly helped the Rambler cement its legacy, this classic car already held an incredibly important role in automotive history.

In the first half of the 20th century, big cars reigned supreme. General Motors, Ford, and Chrysler, also known as the “Big 3” of automakers, dominated the automobile market with massive vehicles suited for families.

George Mason, the president of Nash-Kelvinator, knew that to compete with the Big 3, he had to create a car different from what was already on the market. He observed drivers had increasingly begun using cars for mostly around town, and believed this meant there was now a market in America for smaller-than-average cars. With this vision in mind, his product planners and engineers began investigating different minimum transportation designs as early as 1943.

In 1950, Mason’s vision came to fruition with the release of the first Nash Rambler.

The Design of the First Nash Rambler

The Rambler was smaller than current cars, but still large enough to comfortably seat five passengers. Its smaller size allowed it to be priced competitively while still having enough space to fit a family. This design was a hit with Americans, making the Nash Rambler the first successful American compact car.

The decision to make the lightweight compact car was not only a way to help the Rambler stand out among the other vehicles, but it was also a way for the company to save money on production costs. With lower production costs, the price on the Rambler stayed down, too, keeping it competitive with other high-end convertibles.

But success was not guaranteed for the Rambler. Releasing a compact car when the idea had, so far, failed in America was a risky move. If the public, upon release, saw the Rambler as a “cheap little car,” it would fail like compact cars of the past.

To counteract this risk, the very first Nash Rambler was only released as a fully equipped, two-door convertible. This made the Rambler seem like a high-end convertible, sold at a cheaper price. The decision paid off, and the Rambler was described as stylish, well-equipped, and easy to drive by the media. The improved fuel economy that came with the Rambler’s lightweight design also helped with its appeal.

The Nash Rambler changed the future of the automotive industry in the 1950s. But the year “Beep Beep” came out, while US total exports had slid 16%, the Ramblers had climbed up 10.3% from the previous year, largely because of the song’s influence. Without The Playmates and “Beep Beep,” the Rambler wouldn’t be nearly as famous as it is today.

This novelty song was never meant to catch on. Roulette Records never even intended to release it as a single, instead placing it on the B-Side to The Playmates’ “Your Love.” But the catchy lyrics and tempo must have resonated with the public, because it didn’t take long to catch on and add to the Rambler’s legacy.

While few Nash Ramblers are still available for sale, you might catch one at an automotive museum. The car’s legacy is undeniable. After the Rambler, many companies started creating compact cars made for families, but no vehicle could ever gain the amount of fame the Rambler did with a simple “Beep Beep!”