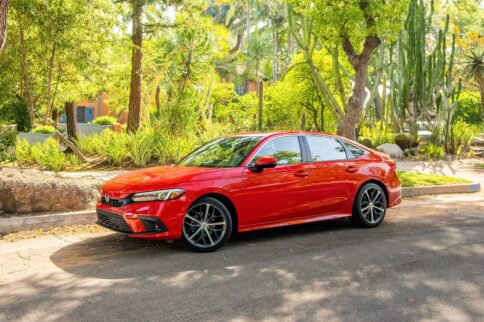 The compact sedan class is smaller than it used to be, thanks to the continued popularity of small crossover models. But the cars themselves, while fewer in number, are better than ever. Most come standard with comfort and convenience features you would have paid extra for in the past, and some are as roomy inside as mid- and full-size sedans used to be.

Fuel economy has also improved, and you don’t have to go back very far to see the difference. In the last 10 years, the most fuel-efficient compact sedans have gotten even better, and there’s a smaller gap between the best and the worst.

For this comparison, we’ve lined up every compact sedan on sale today against their equivalent models from a decade ago. That means we’re only considering cars with basic gasoline engines: The Hyundai Elantra and Toyota Corolla lineups include hybrids now, but didn’t a decade ago, and the Honda Civic Hybrid that was on offer a decade ago is long gone. And while the Volkswagen Jetta TDI was once an economy superstar among combustion-engine cars, you can’t get one in the current Jetta.

We’re not being picky about manual transmissions versus automatics—whichever one is more efficient makes the cut. We’ve listed the cars below starting with the most fuel-efficient new models, according to Natural Resources Canada’s (NRCan) fuel consumption database.

Two generations separate the 2011 and 2021 Hyundai Elantra designs we’re looking at here. The newer version’s efficiency benefits from a continuously variable transmission and an idle-stop-and-go (ISG) system that shuts the engine down at red lights. Even without the ISG system (it’s only included in the Essential model), the Elantra’s fuel consumption is estimated at 7.5/5.7 L/100 km (city/highway), which are still the best figures in this group.

The 2021 Elantra Essential is the entry-grade trim, priced at $19,799 with the CVT. You can also get a six-speed manual, but it’s less efficient. The Essential package includes A/C, heated front seats, and an 8.0-inch touchscreen powering a four-speaker stereo.

In 2011, the Elantra’s base 1.8L engine was most efficient with a six-speed manual transmission. You could get it in the $17,999 GL model (one trim up from entry level), which came with A/C, keyless entry, heated seats, Bluetooth, and tilt-and-telescopic steering.

The Honda Civic is all-new for 2022; the 2012 model was also a new design, though it was not as dramatic an update as the latest model is. As with the Elantra, the latest Civic is two generations distant from the 2012 version.

In today’s Civic, LX trim is the starting point with a 2.0L four-cylinder engine. An optional 1.5L turbo motor has the same combined fuel consumption rating, but we’re using the 2.0L powertrain in this comparison for its lower price.

The 2022 Honda Civic LX sedan comes with automatic A/C, passive keyless entry, heated front seats, and a 7.0-inch touchscreen with an eight-speaker stereo. With its standard continuously variable transmission, the newest Civic has a starting price of $24,465.

In 2012, the Civic LX was one step up from the car’s base model, and it added A/C, cruise control, and power door locks with keyless entry. Fitted with the five-speed automatic transmission rated for the thriftiest fuel consumption, Honda’s MSRP was $18,940.

From the 2021 lineup, we’ve plucked the entry-level LX trim level, and we’re comparing it to the LX+ from 2011 so that both cars have similar basic creature comforts.

In both the 2011 and 2021 Forte models, the most fuel-efficient setup pairs a 2.0L engine with an automatic transmission: a six-speed in the 2011, and a continuously variable in the new car.

The Volkswagen Jetta is the only car in this article for which we’re comparing back-to-back generations. VW redesigned the car in 2011 and then again in 2019, and that newer design is still on sale for 2021.

In 2011, the Jetta offered a pair of relatively inefficient engines; the one we’re using for our comparison is a 2.0L four-cylinder making a modest 115 hp. Back in 2011, the Jetta’s TDI diesel was more efficient, but we’ve left it out of this comparison because there’s no equivalent in the 2021 Jetta lineup.

By 2019, the Jetta had switched to a 1.4L turbocharged base engine that was both more powerful and efficient.

In 2021, the Jetta range begins with the Comfortline trim ($21,595 with the six-speed manual transmission), whose main distinguishing features are a 6.5-inch touchscreen with Android Auto/Apple CarPlay, LED headlights, and heated front seats.

The 12th-generation Toyota Corolla you can buy today as a 2022 model debuted in 2020, while in 2012, the Corolla’s 10th generation was halfway through its run. The most efficient Corolla in 2012 paired a 1.8L engine with a five-speed manual transmission; for 2022, an optional 2.0L motor matched with an also-optional continuously variable transmission is the thriftiest combination.

In 2012, the Corolla S with a five-speed manual transmission was a $20,455 car whose big boasts were manual A/C, regular cruise control, keyless entry, power windows, and fog lights.

Nissan debuted an eighth-generation Sentra sedan in 2020. The only changes for 2021 are standard heated seats and Android Auto/Apple CarPlay, items that were optional before. If you had shopped for a Sentra 10 years ago, you’d have test-driven a sixth-generation model.

The new Sentra looks a lot different than the 2011 model, but the car’s mechanical evolution has been more subtle. Both cars have a 2.0L engine and, for our comparison, an optional continuously variable transmission more efficient than the six-speed manual that’s standard in both cars.

The 2021 Nissan Sentra S Plus ($20,898) has heated seats and side mirrors, a 7.0-inch infotainment screen and, uncommonly for a compact sedan, rear parking proximity sensors.

Among compact sedans, the 2021 Subaru Impreza’s main claim to fame is standard all-wheel drive, a feature that also set it apart in 2011.

The Impreza has changed significantly in other ways in the last 10 years. The new car is roomier inside, and it boasts the most significant improvement in fuel economy of any car in this article. The 2021 Impreza owes its better efficiency to a smaller but more modern engine and a continuously variable automatic transmission, while the 2011 model had a relatively big 2.5L engine and an unsophisticated four-speed automatic transmission.

For our comparison, we’re looking at the 2021 Impreza in $21,995 Convenience trim with the optional CVT, which has fog lights, a 6.5-inch infotainment display with Apple CarPlay and Android Auto, air conditioning, and heated side mirrors. You have to move up a trim to get heated seats.

Since its 2004 debut, when it replaced the Protégé, the Mazda3 has been a favourite among driving enthusiasts on a budget. However, its fuel economy was never particularly impressive until Mazda introduced its SkyActiv powertrains in the 2012 model. Our 10-year timeframe takes us back to a year before that, when the Mazda3’s thriftiest powertrain was a 2.0L engine with a five-speed manual transmission.

The 2021 Mazda3 carries forward a fourth-generation design introduced in 2019. The most efficient engine is still a 2.0L, but only when matched with an optional six-speed automatic transmission.

An entry-level 2021 Mazda3 GX is a well-equipped car that comes with A/C, heated seats, rain-sensing wipers, an 8.8-inch infotainment display, and a 7.0-inch digital gauge display. In 2011, the base Mazda3 GX had to be optioned with a comfort package to get